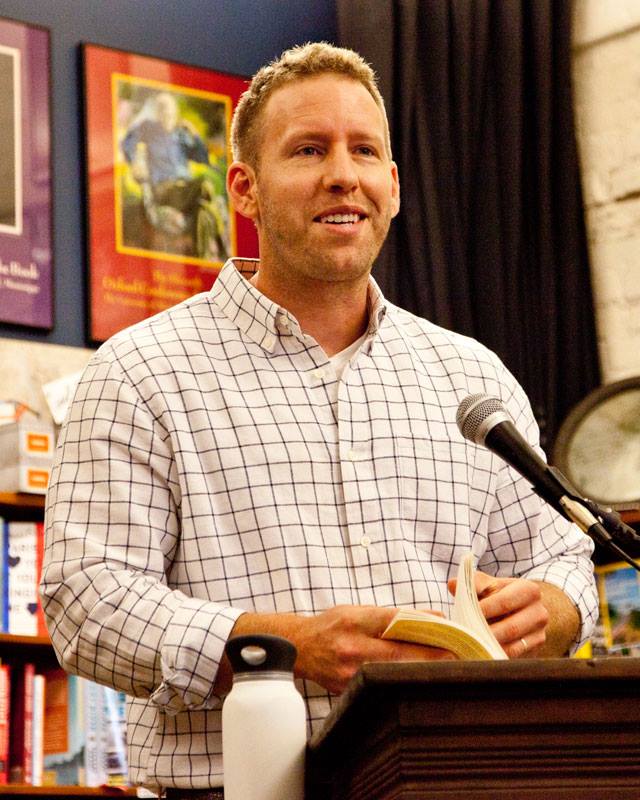 Mark Wagenaar is the 2016 winner of Red Hen Press’ Benjamin Saltman Prize, for his forthcoming Southern Tongues Leave Us Shining. His  The Body Distances (A Hundred Blackbirds Rising), and Voodoo Inverso, won UMass Press’ Juniper Prize & U of Wisconsin Press’ Pollak Prize, respectively. He has also won the James Wright Prize and the Pablo Neruda Prize. His poems have appeared or will in The New Yorker, Tin House, Missouri Review, Field and Southern Review. He is currently serving as a Visiting Assistant Professor at Valparaiso University.

Evening light steals in amongst the tulips
like a pickpocket’s hunger. Grain in the streets,
Midwest goldrush, tractors towing in trailers
piled high, long wains shaking their way in.
Half a horse shy of being a one horse town.
One plastic & foam deer per yard, shot to pieces,
a hundred wounds in each, a hundred arrowpoints,
a braille of absences clustered near the vitals.
I’d sooner trust my hand with a live cobra
than a razor-crowned broadhead—a stainless steel
pyramid of 3 or 4 blades meet at the tip.
No way to pick it up to screw it to the arrow.
No way to leave this town, they sometimes say,
except for the army. And at the road’s end—
doesn’t really matter which road, does it,
it’s every road—a truck on cinderblocks, & baggies
that go a hundred a gram, the quiet of snow settling
to the bottom of a Mountain Dew bottle, a slash
of want, of hunger, I cannot guess at. Here’s one way
it works—the only bar in town runs it out the back.
So yeah, the sheriff says he knows who’s cooking,
but that doesn’t seem to stop anyone, until a fire
blows out the windows, & yellow tape borders
the property. Here’s another: hauled around
in a car behind a tow truck, so if you’re stopped,
it’s someone else’s. I’ll be a tourist here all my life,
in this town without a stoplight, beneath streetlights
orange as sorrow, where the abandoned theater
beams a light of names of those who disappeared
onto a cracked screen, where the water tower echoes
with the passing years, & the weed grows innocently
beside the corn. I’ll be a tourist this evening, too,
half rumor & half lost hour, I’m dewclaw
& peepshow, a cat’s extra life no one’s even heard of.