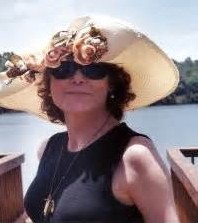 Diann Blakely (1957-2014) was the author of three collections — Hurricane Walk (BOA 1992), Farewell My Lovelies (Story Line, 2000) and Cities of Flesh and the Dead (Elixir, 2008).  She served for many years as an associate poetry editor for Antioch Review.  Widely published and anthologized, Blakely was a tireless advocate for poetry, especially the poetry of the American South.  She was twice awarded Pushcart Prizes for her own poems but worked hard to keep the work of Lynda Hull and Eleanor Ross Taylor in the public eye.  For more about her work, see our blog post from mid-August.

Did you like slasher flicks, their doomed coeds
In eighties’ leg-warmers, six-packed dates
Loaded for a weekend’s fun with sex and sleds

And skis? But not in the Magnolia State,
Where rows runnel the delta’s silt, not snow,
Seeds scattered like mascara-flecks on Kate,

Kimmie, eyes taking on a raccoon’s glow,
Or madmen’s, who pant behind pine trees,
Then smile as blood begins its muddy flow,

As yours did, opened to snaked tubes each week
For chemotherapy, which didn’t work.
What else was there to do but watch old movies, . . .

My nappy curls of hair fell to the floor
At your shears’ cut. “Nappy”? Friends white
As cirrus clouds, as blinding-clean wordwork,

Or empty appointment slots, which added bite
To moods that swung from stars to thickest mud
Despite the meds and opiated light:

The doors stayed locked, despite the thud
My fists gave for our last scheduled meeting:
“It’s this fucking economic crud,”

You’d flung over red wine disappearing
From its box at your last Christmas party . . .

Belovèds are the ones we hurt the most,
More than ourselves—bang! a gun, you’re toast,
And what will your poor mother think? Lost—

Herself and you in a last breath. Your dad?
We searched address books, but nobody had
A clue. Halfway yours, his Creole blood,

How could so many talents live as one,
Given our frail flesh: your clouded kidneys
Replaced but with no savior; my sad lungs
Wheezed silver on your easel, the low stars giddy