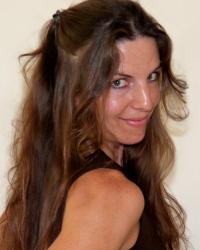 Amanda Pauley, runner-up in this year’s Bevel Summers Contest,  is an MFA in Creative Writing student at Hollins University.  Her fiction has appeared in the 2011 and 2012 Press 53 Open Awards Anthologies, the 2013 issue of Cargoes, and multiple issues of the Clinch Mountain Review.   She was a 2012 Thomas Wolfe Fiction Prize finalist, a runner up in the 2013 Andrew James Purdy Prize for Short Fiction, and the winner of the Arts & Letters Prize for Fiction in 2013.  She is currently working on a collection of short stories.

Dawn came upon the Eastern Shore of Virginia when the farmers were already working.  The tomatoes were staked and tied, heavy with fruit, ready for picking.  The corn fields were tall and green, and long irrigators stretched across the square plots.  Tourists laughed and drove toward Chincoteague Island to watch the wild ponies shake the flies from their necks in the heat.  Seagulls, scanning for carrion, flew around the chicken processing factories.  Employees at Tyson and Perdue labored in bloody, fat-soaked uniforms while the chickens died screaming.  Truck drivers pushed the fifty-five mile an hour speed limit up and down Highway Thirteen, which sliced the Eastern Shore in half, while the lifeguards blew their whistles at fat men swimming too far out from the beach on Assateague National Wildlife Refuge.

The sun finally started to lower, and the heat left off.  In the center of the Eastern Shore there was a chicken farm, quiet now.  The catchers had come in their swirl of powder and arm stockings and sweat and caught seventy-five thousand chickens from the five houses, loaded them into cages, and fork lifted the cages onto trucks.  The last truck drove away and silence came.  Not a single person left.  The grower had gone home and the catchers were already sleeping.  All of the chickens were gone.  Except for one.  In the afternoon’s commotion, and a small fight between the forklift driver and a catcher which ended with the interference of a crew manager, somehow, one single chicken had been missed in a house of 15,000.

That chicken had sat, blinking in the dust as the last truck had driven off with a small Swastika hung on the top cage of the doomed chickens, a joke by one of the catchers that a trucker would later discover when he pulled into the processing plant.  The chicken was disoriented by the sudden solitude.  The heat of the day and that of 14,999 companions was gone.  The plastic dividers were gone, along with the gloved hands of catchers catching.  The water containers were raised as were the feeders.  The only things left were the filthy shavings and rice hulls and the excrement of her previous companions mixed with her own.

She was a she and she was all alone in the chicken house.  Four hundred feet by fifty feet of darkness looked back at the confused chicken.  Forklift tracks graced the entrance to the wide open doors, not one hundred feet from Highway Thirteen.  In the stillness, the chicken moved.  She was alive, unharmed somehow.  Left behind, saved as it were.  She did not make the trip to the factory where she would have been electrocuted, had her throat slit, plunged into boiling water and then been cut apart and wrapped into plastic and rerouted down Highway Thirteen to a grocery store somewhere on the mainland.

She breathed air cleaner than it had been in the fifty-one days she had been raised in the chicken house.  At a neat five pounds, two ounces, she stood up and looked around.  There was no food or water and no reason to stay still, so she walked outside into the setting sunlight.  Had she hung around she might have starved to death or, more likely the grower would have been back eventually with the next round of chickens, killing her surely, as she would not match in body weight with the new arrivals.  She left through the wide open doors and crossed the highway, surprising several tourists and one NASA employee driving home from Wallops Island.  Zigzagging, feathers flying, she made it across, kept on through several backyards and went into a small woods.

From there it is hard to say.  Maybe she lucked out again and found a childless, lonely couple raising chickens in their yard who would happily add her to their tiny population of ten laying hens where she could live comfortably for the rest of her life.  Or maybe she met a dog tied on a chain and was devoured by his jaws.  There is no way to tell.  But for that moment, as the sky went blue and pink over green fields and the grey ocean and bay bordering the Eastern Shore, she was walking free, breathing sweet smelling air with just a hint of salt, and making a friendly clucking into the painted evening sky.  And if I were you, I would hold on to that.