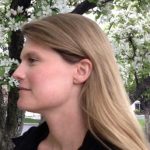 Annie Woodford studied poetry at Hollins College and is now a teacher at Virginia Western Community College. Her poetry has been published or is forthcoming in The Nashville Review, The Southern Review, and Prairie Schooner, among others. Her first book of poetry is forthcoming from Groundhog Poetry Press.

Charlie Poole, you picker with a busted hand,
catching baseballs & breakdowns.
Slurring, on purpose, songs grown in mountain coves—
distinct as certain species of salamanders—
then carried, gap to gap, until
they achieved the syncopated strangeness
a child must feel, tending a loom in a towel mill,
hearing the blue note held over Burley tobacco fields.
You walk across the bottom land,
drinking dipperfuls of liquor
off dew-strewn corn, banjo tuning in and out of time.

I’d set a woman before you,
one who walked the sharecroppers’ shacks
outside Chatham, blood belying a brownness
men would tell their wives about, such beauty
making all men fools, and forgetful.
She is the story no one tells or tells half true,
the music that’s made for the playing,
not to be found on a reel-to-reel tape.
She preferred men to bending over tobacco rows—
their long white feet, their desire to set before her
a whole ham, a bolt of cherry-patterned cloth, a song
(I’d dive to the bottom and never come up).

The rhythm method, prophylactics thick and medicinal,
a falling down like a bucket of water to her knees,
long horse tail of hair hanging over her shoulders—
best not to ask how a woman survives hard times.
But the children came along any way—
a boy she put to walking the Bright Leaf,
picking worms before he could see over the plants,
coffee can of turpentine at his side.
Daughters to raise other daughters
and everything else a hustle for a peck of meal,
a movie show, a bellyful of the moon’s gold coin.

She sat with the men who sat with the tobacco curing,
smoke pouring out of the tops of buildings that looked old
as soon as they were stacked, the embers tended
by boys while a man played a fiddle or a guitar or a banjo
in time to the swallows sweeping the tree line.
A pallet has been made for her.
She lies back on the cooling ground,
seeing patterns in the stars studding the sky,
a heavenly geometry she doesn’t have
to learn to understand
in her long-fingered hands.