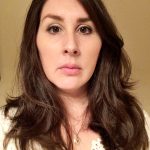 Emma Bolden is the author of medi(t)ations (Noctuary Press 2016) and Maleficae (GenPop Books 2013). Her work has appeared in The Best American Poetry, The Pinch, and Prairie Schooner, among others. Her honors include a 2017 Creative Writing Fellowship from the NEA and the Barthelme Prize for Short Prose. She serves as Senior Reviews Editor for Tupelo Quarterly.

a verb, even before the sky raised its red
lanterns, even while their bodies circled still

inside each pale-shelled egg, the birds
were waiting for wings. They were always

the moral of the story. They knew what
they knew about jealousy by the way each tree

watched their wings rustle like and unlike leaves.
When the fair maiden brought her tears

to the hazel tree, they prepared. They sharpened
their stomachs. They sang to their talons blade, blade.

They sang to their beaks pick, pick. They sang on the girl’s
shoulders, feathers folded. They were patient. When

the clock told its story of midnight, they sang blade, pick
blade, pick, until the wicked were blind. Inside the birds’

throats, the sisters’ eyes watched those slippered feet,
delicate as glass, fox-trot in tune with her sharpest songs.