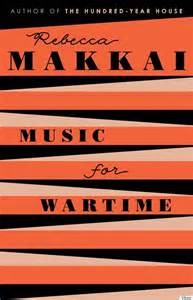 Isabelle McAlevey is a junior English major, art history minor at Washington and Lee University. A lover of all literature, she especially likes to read short fiction. She works as a student intern for Shenandoah and comes from Cincinnati, Ohio.

Music for Wartime, Rebecca Makkai’s impressive first collection of short stories follows two novels, The Borrower (2011) and The Hundred-Year House (2014). Makkai resides in her hometown of Chicago for most of the year, as well as in Vermont – writing, teaching, and caring for her two young daughters. Makkai’s short stories reflect aspects of her lifestyle: her narratives are descriptive and often intimate portraits of family, relationships, and children, and are united, as Makkai has said, by “artists of all stripes and their struggles.” This vision of the arts links past and present, and indirectly connects all her characters in a desire to communicate. In this collection, Makkai shows she is not afraid to take risks in creating nuanced portraits of a wide range of complex characters while maintaining a quasi-autobiographical undertone. Calling on her roots as a first-generation American citizen and child of immigrant parents, the author shapes a new American landscape that is still uncertain and rich with possibility, but peppered with relics of tradition and memories of ancestors.

Often playful and surreal, many of Makkai’s short stories are entertaining. In “The Worst You Ever Feel,” a young boy sneaks downstairs into his parents’ party where a famous violinist passionately performs. Although Makkai succeeds in creating a textured portrait of the violinist’s past in Romania, his “hair would have been wavy still, but black and thick, catching the light of the building’s scattered bulbs,” stories such as this do not require as much of the reader as others. It becomes something of a coming of age story for Aaron, where his understanding of the past changes in light of his first adult experience. He realizes he is not capable of experiencing divine revelations, but that the things he sees and feels are “common sense, floating for anyone to see.” “He lived here in America and now in the present,” and the things he perceives are flashes of his inherent, ancestral past, one that he cannot rebuild fully. Once the reader reaches the end and this conclusion, it seems there is little to entice further reflection.

One of Makkai’s greatest strengths is her ability to weave tradition and memory, both shared and personal into her stories. It is convenient that Makkai is the daughter of Hungarian immigrants, it provides her with fodder for her stories, and her experience and those of her ancestors serve as the building blocks for her literary landscape. Stories come back to back from different perspectives, and while at first this creates a sense of tension, the similarities between past and present, tradition and innovation, hope and destruction ultimately unite.

“The November Story,” about a reality TV producer and her deteriorating relationship with her girlfriend follows “The Worst You Ever Feel,” reinforcing themes of artistic struggle, and also telling stories of passion, lost and found, both in the not-so-distant past, and the present. Similarly, “The Briefcase,” the story about an escaped prisoner who impersonates a professor in order to survive as long as he can comes before “Peter Torrelli, Falling Apart,” which focuses on the friendship and lives of two gay men living in the Midwest. The contrast between the two stories is striking at first, one taking place in Eastern Europe during a time of oppression and one in modern-day America, but the commonality of the struggle against loneliness and the faltering in personal identity spin a traceable thread through the works. Makkai creates a new American landscape where seemingly opposing ideas crystallize in a new single structure.

Makkai’s “The November Story” might be one of the strongest in this collection. Although it follows similar veins of the tension between art and identity, as well as the power of what is left unsaid, the modern context and Makkai’s casual, sometimes sarcastic authorial voice work well in the circumstances of the story. “The November Story” also first showcases clearly the way Makkai treats romance throughout the book. She writes:

Eight days in, the producers tell us we need a romance arc. Kenneth says, “It has to be Leo and Astrid, because she’s the hottest girl, and he’s the only straight guy. We have to go hetero on this.” And then he says to me, “No offense, Christine, it’s the network, they’re asses. And they don’t get our demographic at all.”

Ines says, “You expect us to make them fall in love?”

He slurps his coffee through the lid and then looks at the ceiling.

This passage reflects the modern struggle of production, in any kind of art, where the artist is responsible for his or her characters and must put them together in a way the situation demands.

Makkai also seems to create a “romance arc,” the journey of two individuals from strangers to lovers, throughout this book, although sometimes she struggles to do so. Her best stories focus on peculiar situations or language: forcing a relationship on the set of reality TV show, burying a dead elephant in a swimming pool, Johann Bach emerging from a piano. But when it comes to romance, it seems as though Makkai creates conflict with standard devices. Oftentimes it is distance, emotional or physical, or a circumstance like “he never called her beautiful,” that leads to the crumbling of a partnership. The “romance arc” between the stories seems somewhat tenuous and predictable, the unsurety and unpredictability of the love between Leo and Astrid, two of the show contestants in “The November Story,” redeems the romance plot of that story.

In her efforts to shape a new American landscape, Makkai selects modern themes such as homosexuality, pop culture, and terrorism and infuses them into many of her stories. However, by interspersing these vignettes into modern America with “legends” from her family mythology, she fragments her vision of America. In some ways, this supports an intriguing and even self-conscious portrait of herself as an artist and storyteller. She shares short family legends in order to reflect further on her own understanding of storytelling, and also reveals some sources of inspiration. The first story, “The Singing Women” introduces the possible intent of the author, to fulfill herself by preserving, “before its last breath, their culture.” In the context of the story, it is a male composer who wants to preserve the songs of his father’s people before they disappear altogether, and similarly Makkai memorializes her family and ancestry through her stories. “The Singing Women” ends with the sentence “I’ve lied and turned two women into three, because three is a fairytale number.” This notion of fairytale, magic, and mythology sets the stage for Makkai’s work to follow. Although the inclusion of mythic history in this book helps shape Makkai’s identity as an author and artist, sometimes the myths disturb the flow of the work on the whole and prevent a complete structuring of a new history.

Makkai creates a new American landscape through engagement with the peculiar both in modern and ancestral settings. However, this book, like a struggling artist, has moments that keep it from latching onto a single identity. Still, it makes sense for these stories to be grouped together, they should be, and they are stronger as a collection built on a foundation of artistry and memory than as any one individual might be. Though some of the fluidity of the book is disturbed by the changes between mythic past and surreal present, it does not seem entirely unintentional. When taken as a whole, Music for Wartime creates, as the name might suggest, a symphonic literary rendering of struggle and identity as an individual and artist.