THE BOOK OF GOODBYES (BOA Editions, Ltd., 2013) by Jillian Weise 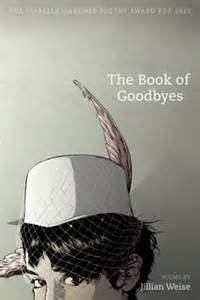 Winning the 2013 Isabella Gardner Poetry Award and the same year’s James Laughlin Award of the Academy of American Poets should be sufficient to recommend Jillian Weise’s The Book of Goodbyes to the reading public. Still, any book that compels a born and bred fan of the University of South Carolina to say something positive about Clemson University, which I hereby acknowledge had the wisdom to employ Weise in her current position of Assistant Professor, requires a more personal recommendation. I have not yet read Weise’s first two books, The Amputee’s Guide to Sex and her novel, The Colony, but I plan to now. The Book of Goodbyes is good enough that I want to read the work that preceded it.

A playwright as well as a poet, Weise organizes The Book of Goodbyes into two acts separated by an intermission and followed by the final section, “Curtain Call.” She employs a wry sense of humor—a very dark one—to explore in “Act One,” “Act Two,” and “Curtain Call” the complex emotional landscape of her speaker’s life as an amputee. Among poems addressing the speaker’s relationship with her lover, Big Logos, the poet directly addresses prejudice against people with physical disabilities in poems such as “The Ugly Law” and “Elegy for Zahra Baker.” Readers will find nothing here of political correctness. There is no suggestion that disabled means “differently abled.” Weise confronts readers head-on with the speaker’s own insecurities about sex, relationships, and fidelity; she does not mince words.

As engaging as these three sections of the volume are, however, the most exhilarating poems are the three in “Intermission,” the book’s second section. “Tiny and Courageous Finches” introduces the reader to two primary actors, Bitto and Marcel—finches who fly in and out of a cave behind a waterfall visited by tourists—and their love interests, the finches Lydia and Kate. In this poem and the two that follow, “Go On High Ship” and “Marcel Addresses Kate (As He Would If He Could),” Weise creates a world in which Marcel works on an “index of every time / a finch appears in print,” birds Skype to communicate, the finch embodiment of Wallace Stevens appears to deliver a monologue and sell insurance, and Kate reads the Surrealists. “Intermission” is a terrific sequence that does, indeed, provide an imaginative break in the volume, although I am convinced that additional readings will suggest subtle connections between this avian world and the dilemmas evident in the other poems in The Book of Goodbyes.