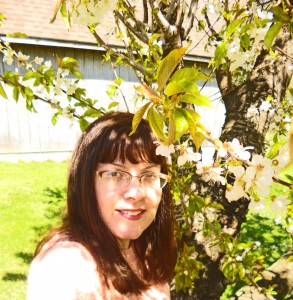 Melanie Faith is a three-time Pushcart nominee who holds an MFA from Queens University (Charlotte, NC).  In addition to poems in Germ Magazine, she has also published chapbooks, Catching the Send-Off Train (Wordrunner eChapbooks), To Waken Is to Begin (Aldrich Press, 2012); numerous photographs; and creative writing articles in The Writer and Writers Journal.  She is currently at work on a novel.

Knee-deep in the yarrow and saw grass, I’m sweating it out on Old John Slade’s property. After school. 75 cents an hour. Bobby Slade cuts me a check every other Friday.

“Avoid running that tiller into the slops, boy,” Bobby Slade warns, handing over the key on a frayed shoelace. “You do and you’ll rue the day.”

Old Slade’s son inherited the property after his daddy’s passing. Bobby Slade’s dunlap blobs over his belt like Santa. Like Cranston Jones, he don’t wear a shirt more than necessary. I’ve been bigger than Cranston Jones since eighth grade. Bobby Slade’s shadow, though my height, could flatten me.

But I need the money. And I’ve already had my fifteenth birthday last Monday—ain’t that much time to save.

I nod. Careful to wheel the tiller out of the garage, safely past the drainage ditch. Swallow gas fumes all afternoon. Sweat dribbles down my back. Rivulets collect under my belt.

No matter. I keep prodding.

Mama says, “You sure are a Jones, through and through,” though everybody else says I look just like Mama. It’s the Morgan square jaw and the root beer barrel eyes. When I get this down payment together, I’m gonna be my own man. I’m gonna ask Jessa Malbeck for a Coke float at Roary’s. Jessa’s gonna sit up in my passenger seat and figure out the rest.

How’d Old Man let it get this high? How’d Bobby Slade show his face in Dehlsboro again, everyone knowing he run off with Mrs. Celia Johnston to Vicksburg. When he come back in April, no Mrs. Johnston. Everybody knows better’n to ask flat-out.

“Plain simple: it’s all about the money,” Mama maintains, lighting another Pal Mal, watching her stories on the tube. Cranston Jones passes through the TV room on his way to second shift, muttering something neither of us can quite make out. Mama ignores him. Drags deeper on her cig.

“I tell you, son, some happenings ‘round these parts are just as no-good and pleasing as what you get on the tube.”

I nod, figuring out the first equation, thinking of Jessa. Her red polka-dot dress. “Jim-Beau, you get the answer to seven?” she’d whispered during the algebra quiz seventh period. I didn’t know. Next time, I’ll be set.

It’s all about the money and Jessa, these afternoons clipping and tilling and mowing Old John Slade’s home place.

The whole time I’m out here, I feel Bobby Slade’s shadow bearing down on me from behind the front-facing window. How’d old guys like Bobby Slade let themselves get that way? A big Santa belly, swilling sweet tea, parked with the fan running while somebody else takes the heat. Making sure I don’t ruin his daddy’s precious machinery. Inherited a cool mill, parked behind his dead daddy’s door. I’ll never get that way.

Where’d it all come from? This saw grass tangles in with the ketchy gnats gnawing away under my collar, nicking my arms and shoulder blades. Always there, just above the skin, though gone by the time I shift my hands from the sticky metal handle to swat them. Red rashes pepper my back. 5:22, 5:27, 5:33. I push, shove, sweat. No matter— for Jessa, worth it.

I’m working it out. I’m working: Monday, Wednesday, Thursday, seventy-five cents an hour. I’m gonna get me that car. My own way.

From the packet of love letters Mama thought she hid in the linen closet, I know it. Sure enough from his checks: that’s Bobby Slade’s writing on them bad-hid envelopes.