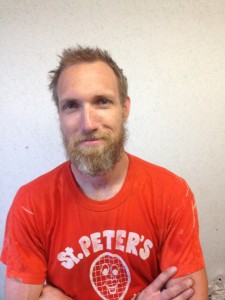 Jacob White is the author of the short story collection Being Dead in South Carolina (Leapfrog Press, 2013). His fiction has appeared in The Sewanee Review, The Georgia Review, Salt Hill and elsewhere. He currently teaches writing at Ithaca College in Ithaca, New York.

Chunking through channels at two a.m., I hit a dead zone. There’s not even static, just the black glow you see behind your eyelids. I become aware of my dark room, a little station above the night sea. I think the TV broken finally, its retina snapped. Slow aquatic taps fill the plastic casing behind the stunned screen. But no, a square of moonlit curtains floats past, smearing the dark, and now the camera is gliding close and slow, like some deep-sea rover, over taupe carpet and lingerie, then ankles, calves; the tapping resolves into sultry synth pulsing desiccated celluloid, the bass blown out. The fried-out stock flattens the bedroom murk, everything irradiated into the yokey black frizzling screen. Clunky sounds crash against the screen, stifling the synth—sheets crinkling like shower liners, kisses like Paramount punches. Everything’s delaminated, disembodied, floating loose, and the world beneath stuns me with its presence: a live feed from a decades-deep fissure where the dead float upright, Sonny Crockett’s sex scene flash-burned upon the water, the midnight sax stuck soaring in its tired genus of bluesy rapture long after the scene has wrapped, the show retired, the mansion reoccupied by its retirees, then sold to a good family, a bad one, the taupe air-conditioned carpet now dank and mildewed, clodded with pigeon shit, now ripped up, rolled, and razed with the filthy white neo-manse. Meanwhile the grips have had a hundred seafood dinners and passed on, the A.D. dead of heart attack before the eighties were quite out.

But now, here in the dark, time has come to nothing but water, and the feed is live: it’s all quiet on the set, while six-hundred miles north my father drags me down Crowders Creek on a tube (these moony bedroom scenes shot in daytime usually). Then she is in the shower, and when she calls out a cheery question to Sonny, who smokes in bed, exhaling across his surprisingly pale armpits, her lilt as artificial and antique as those dubbed actresses in the fifties, I know instantly that she is now dead, a mannequin in the ground, even as she stands, still, in the next chamber of this morbid Miami deco palace, her voice knocking against the walls. If I could get there, I would snap the feed and disappear forever, no matter the morbid ruins, the yellowed corpses, the Martian sun behind the curtains. The desert of the real is the most heartless but most sublime desert of all. Everyone is dead and you don’t have to look much at their eyes. A world without eyes and without words. Miami silent but for the hollow knocking of ropes against the masts.