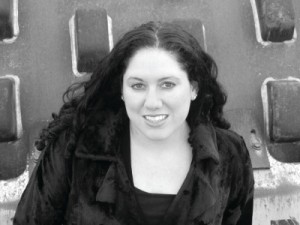 Erika Meitner is the author of four books of poems, including Ideal Cities (Harper Perennial, 2010), which was a 2009 National Poetry Series winner, and Copia (BoA Editions, 2014). Her poems have appeared in journals including Tin House, American Poetry Review, Ploughshares, Virginia Quarterly Review, and elsewhere. She is currently an associate Professor of English at Virginia Tech, where she teaches in the MFA program.

Listen to the author reading this poem.

And the neighbor’s daughter shows my son
the way her father let her hold his gun,

with bullets in it.  She was on Adderall,
and now Ritalin, and they’re only in

and tries to destroy the plants or bugs
around our house, which is the bus stop,

so we head out each morning in our
pajamas, clutching coffee mugs, to wait.

The engine of the bus is huffing,
unmistakable, and we can all hear it

before its yellow nose comes around
the bend.  The kids climb the high steps

like they’re scaling a great peak.
I can see my son fling his body

into a seat; he waves from the window
while Sarah makes her way to her

mandated spot behind the driver,
who waves to us too, then pulls the lever

to shut the doors and heads down Heartwood
Crossing, though the sign says Xing

as the whole name won’t fit.  This cross-
hatch, this target; X marks the spot

Sasquatch Xing.  my son loves to watch
the show Finding Bigfoot, where

a recent spike in Squatch sightings.
Each episode is exactly the same,

save for the location:  they go out
as a team one night to look for bigfoot,

call for him, and find signs.  Next,
they have a town hall meeting

to discuss sightings with residents
who tell stories, which they recreate

using a giant guy named Bobo as a stand-in,
and they always come to the conclusion

for keeping a loaded Uzi on the floor
of their garage.  When Sarah aims,

with her fingers, at the empty birds’ nests
in the eaves of our porch, I wait for her

to say bang, but instead she repeats
it had bullets in it, and there’s the bus

wheezing around the bend again,
yellow as a road sign, a daffodil,

a stretch of CAUTION tape.