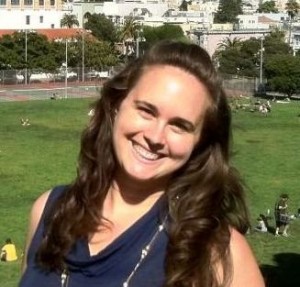 Mary Angelino’s poetry has appeared or is forthcoming in Best New Poets 2010, Hayden’s Ferry Review, 32 Poems, Bellingham Review, and Nimrod, among others. In 2012, she received an Individual Artist Grant from the Arkansas Arts Council and her poem “Farmers’ Market” was featured in the documentary, Up Among the Hills: The Story of Fayetteville, narrated by Bill Clinton. Originally from Los Angeles, she now teaches English at the University of Arkansas, Fayetteville where she earned her MFA.

Salvatore learns English from the movies
where Charlton Heston holds the writhing
Anne Baxter, a white actress made-up to look Egyptian
and tragic. When she pulls away it means hold me closer,

I don’t care if I’m caught.  Sal’s mother hides
in the subway to spy on the 6 o’clock train,
her husband parting the crowd with his Heston chin.
She says it’s her fault she married

a Northern Italian—blond and light skinned,
a mouth full of straight teeth. She cuts
the eggplant without looking, whole garlic cloves
and basil; serves everyone before she serves herself.

Below their apartment the same old
drunk starts to rant about his whore of a wife.
Sal’s mother clears the plates with a look he will inherit
and pass down—a creased brow un-creasing

with relief, when life is bad but not as bad
as it could be. Curses barge through their window
mixing with the voice of Moses, as the desperate
drag everything they’ve got across the parted sea.