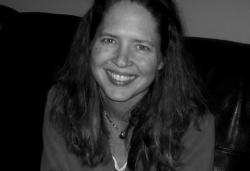 The night lightened to blue through the open tent flap, the humidity pressing close. No one had slept, but the show needed a new trick rider so Toby stood in the middle of the ring, sand on his boots, as Nadina stood barefoot on the mare’s back. She could feel each of Maggie’s hairs under her toes, soft yet frictioned with resin.

The bind of the harness sat tight against Nadina’s waist and shoulders. The leather was old and cracked but Toby had checked it before strapping her in, his chipped fingernails going white as he pulled each piece to test it.

He touched the whip to the horse’s flank, and Nadina felt soft knocks against her feet before she saw Maggie’s shoulders move, before she heard the mare’s hooves rise up and sink back into the sand.

“Arms out,” Toby called, “like a pole passing straight through you.” His voice drawled and lisped, a quiet boy now middle-aged with a cowlick and a cigarette. She nodded then stopped, feeling her head bob like a weight that could send her skittering off with one bad tilt.

Nadina hadn’t wanted this job. She was selling popcorn and shoveling elephant shit and waiting for the trapeze to open up. She glanced now at the bar secured high above her head. She’d been waiting to climb up there for months, the stink of salt and dirt clinging to her as she watched, night after night. Everyone saw her waiting; everyone saw her held in place. They knew she had spent her life so far on the ground, with the dust and the dirt.

But then last night Mario had fallen, rider down, and Toby had told her that she’d be perfect on Maggie, that her legs were strong enough to hold her still, her balance like that of a ballerina en pointe. He’d said that, en pointe, with a French accent like he’d come from another world, one Nadina hadn’t realized he’d even heard of, much less visited.

“I can’t,” she’d said. Balancing didn’t worry her; she’d been carrying books ten high on her head since she was five. And Toby was right, her legs were strong; all that shoveling had called up muscles she’d left long ago. Muscles she’d planned to use on the trapeze, strong enough to hold her to the bar until she let go.

“Try,” Toby had said. Everyone talked nearby, whispers and tears, but Toby was focused on what was needed, what could be done. He leaned closer to put his hands around her face, to pull her near. His thumbs were rough on each cheekbone, his years of handling horses right on his fingerprints.

Maggie walked on, her ear cocked to Toby. Soon he clicked his tongue and she started trotting, shockwaves rolling up Nadina’s spine and into her skull. “Stop,” she called, her knees bending and her hands cupping down.

But Toby kissed the air and Maggie broke into a canter, a rhythmic swinging that rolled under Nadina’s feet. Maggie’s mane lifted from her neck and floated down again, and Nadina imagined this felt a little like the trapeze, the air breezing by her face. Her feet relaxed against Maggie’s back and she crossed her arms to her chest, her heart steady under her right palm.

“Arms out,” Toby shouted. “Quit messing around.” She obeyed as if scalded, and Maggie’s ears flicked back as her weight shifted. Nadina turned to look at Toby, the harness creaking over her head. It was an old one, the harness, Toby said it hadn’t been used in ten years, not since Mario first learned to trick. Ten years, she thought, ten years on this circle. Ten years the harness had lain in a heap next to whips and bridles and surcingles, drying out and cracking and going gray. On the trapeze she’d use a new one, nylon and titanium and rigged with safety backups. She longed to feel the bar hard behind her knees as she flung herself further and further from the earth; she imagined Toby on the ground getting smaller and smaller the higher she flew, the distance between then unrolling like silk.

She heard the earth flying from Maggie’s hooves in clumps as they circled around; she saw the pride in Toby’s face when she turned her head. He nodded, the center of her orbit, as if she would spin around him forever.

Years later she would foxhunt, the horse so excited by the chase that she could feel his heartbeat through the saddle and against her thighs. She’d skim over fields balanced as a cat, stirrup bars hard against her boots, the braid of the reins tight between her fingers. The morning would press close just like this one, the sky a bare light blue, and she’d think of Toby. She’d shut her eyes, a blink, and push him away, her heels to the horse asking for flight. As if she’d been born here instead of brought. As if he’d never taught her anything at all.