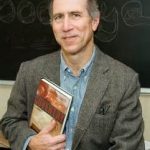 Joseph Bathanti is former Poet Laureate of North Carolina (2012-14) and recipient of the 2016 North Carolina Award for Literature. He is the author of seventeen books, including The 13th Sunday after Pentecost, a volume of poems, released by LSU Press in late 2016; and the  novel, The Life of the World to Come, from University of South Carolina Press in 2014. Bathanti is Professor of Creative Writing at Appalachian State University.

I was a fire-breathing Catholic C.O,
and made my manic statement,
telling off the state and president, and then
sat waiting sentence in the bull pen
beside a Negro boy with curlicues of marijuana in his hair.
— Robert Lowell, “Memories of West Street and Lepke”

shackled State felons, in felon brown,
huddle in the bullpen,

Among them lounges the shade of Robert Lowell –
foggy, white as the Mayflower, goggled

in heavy black spectacles, snowy hair
spiriting about him like “curlicues

of marijuana.” At the sound
of his blue-blooded Boston name –

convict backdrop, a cameo
of numbers sprayed across his breast.

of vermouth, he invokes
the Holy Ghost, blesses his fellow yard-birds

in a flaming hail of Gatling couplets.
They merely glance at him –

another Jailhouse poet, drafting
one more season of the manacle,

his final sentence on the State: Parnassus,
a road camp down-east, bedded

in the Green Swamp, where lurk
bear and panther. The last red wolf,

scribbles stealthily in his brack and fen,
never consenting to be seen again.