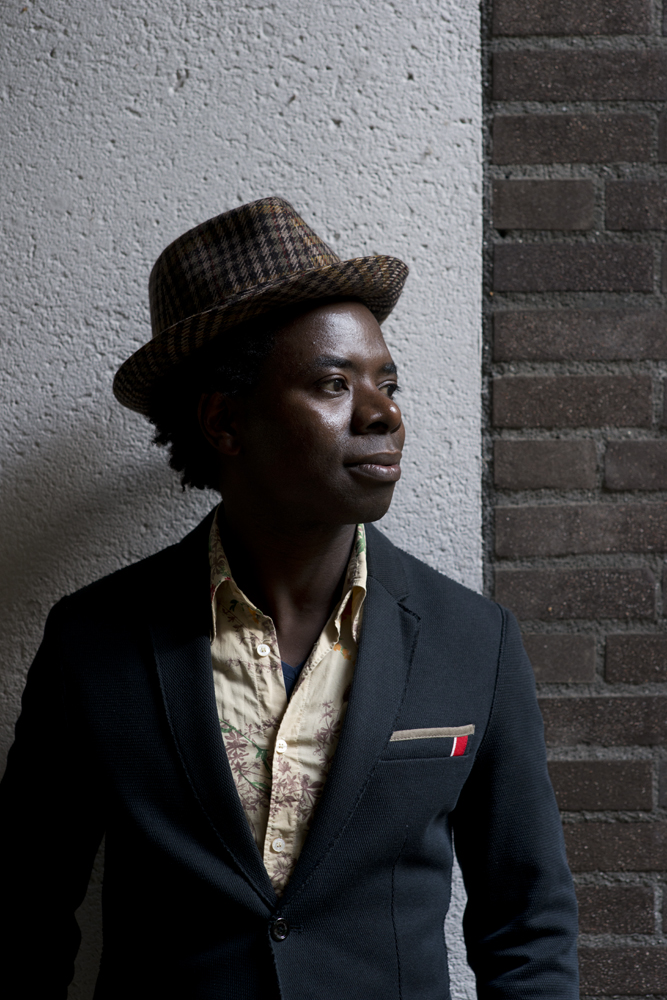 In this feature piece, Lucy Scott, Denice Gravenstijn, and Annemarie Toebosch recap highlights from their interview with author Vamba Sherif, in which he discusses his life, his short story “Flame Trees,” and his forthcoming memoir.

The literary work and life of global writer Vamba Sherif shows that identity doesn’t have to bind a writer to any particular place. Sherif’s short story “Flame Trees,” first published in the Dutch anthology Zwart as “Flamboyante Bomen,” introduces the protagonist Abu, who has spent twenty years living abroad in Belgium, the country where he sought refuge after fleeing civil war in his home country of Liberia. Abu returns to Liberia to uncover the true story behind his mother’s death, refusing to accept his family’s story that she passed away from illness.

Abu’s grandfather is described in “Flame Trees” as having been an influential, charismatic scholar who performed miracles and his mother as having been a beautiful, compassionate woman whose majesty rivals that of the radiant flame trees that dot the landscape of Abu’s homeland. In the mystical worldview that guides the culture of the characters in this story, beloved community figures are granted a less tragic end through protective stories that both reveal the truth (by admitting that a death has occurred) and obscure it (by hiding the means of death).

According to Sherif, a key difference between many African cultures and the West is that African death rituals require the messenger to gradually build up to disclosing a death, first by bringing over food, then by telling stories that highlight the interconnectedness of the deceased with the community, and finally by revealing the passing of the deceased. The circumstances of death do not necessarily need to be shared. As Sherif explains, it’s socially acceptable to prioritize empathy and love for those remaining by innovating a story to make the death bearable.

Sherif notes that Abu, by contrast, displays a European mentality when he arrives in Liberia to piece together the fragments of the various stories that detail his mother’s violent death. “[Abu] is that migrant who wants answers,” Sherif says of the character. Abu’s insistence on using reasoning and logic to zero in on the cold, hard truth underscores his current distance from the Liberian culture that birthed him. While Abu’s brother Sekou asks him where home is, Abu increasingly longs to be back in Belgium, and his attempts to reclaim his Liberian identity by understanding his mother’s death increasingly become an unresolvable cultural clash that highlights that he no longer belongs to his former home.

In the end, learning the details of his mother’s passing does not offer Abu any solace because this discovery does not help him reconcile his European identity with his African one. “I actually share [Abu’s] struggles,” Sherif admits. “I left Liberia as a child and moved to Kuwait, went to an Arab high school, spoke Arabic fluently. And sometimes I actually thought I was an Arab. But sometimes things happened that made me realize that no, I’m still that African boy who left so many years ago. And that’s the problem with migration, because when you move from one place to another, you take things with you, but you lose some things.” Reflecting further, he adds, “That sense of belonging is always a struggle, you know, and so sometimes you are at the border between belonging to one place or the other.”

Sherif belongs in the liminal space between places. He is a multilingual novelist, journalist, and film critic based in the Netherlands whose life and literary work spans three continents: Africa, Asia, and Europe. He comes from a privileged family of intellectuals in Kolahun, Liberia, where he grew up speaking his mother tongue Mande along with Liberian English, Gbandi, Kissi, and Loma, which are spoken in Liberia and the neighboring countries of Sierra Leone and Guinea. In Liberia, he was educated in English and also studied French. He spent his childhood in Kuwait, where he attended an Arab high school and learned to speak Arabic fluently.

When the Gulf War caused Sherif to flee Kuwait and the civil war in Liberia made it impossible for him to return to his hometown, Sherif abandoned his plan to study abroad at the University of Michigan and instead first moved to Syria and then later to the Netherlands as a refugee. There he quickly acquired Dutch and studied international law. Sherif normalizes his linguistic skills, pointing out, “It’s not because I’m talented that I ended up speaking all these languages. It’s not something unique about it. I just grew up speaking these languages because I was surrounded by people who spoke these languages.”

Out of his linguistic repertoire, Sherif writes predominantly in English and in Dutch. “Flamboyante Bomen” has the nonfiction English-language story “Kolahun” as its predecessor. Recalling his decision to rework “Kolahun” into the Dutch-language fiction piece, Sherif explains, “I could have written this story [‘Flamboyante Bomen’] in English. When you read this story, you see that the Dutch version [‘Flamboyante Bomen’] is much better than the English version [‘Kolahun’], and it was very deliberate. I decided: ‘All right, I want to do this. I want to express this sense of loss in Dutch and by doing that claim the language.’ [Dutch] is a language that I speak every day, much more than English or other languages. So it’s my choice. Sometimes I write stories in English, and sometimes I write in Dutch. And there are choices that I make. I see it as a kind of privilege because there are not many people who are given the privilege to write in different languages.”

Although many Dutch consider Sherif to be a Liberian writer or a Liberian-Dutch writer, Sherif himself resists being pigeonholed: “I’m first and foremost a writer. Liberia gave birth to me and formed me. The Dutch language, Dutch culture, gave me wings and made me the person I am today. [The Netherlands] is where I realized my dream. This is where I wrote my novels, where I continue to write novels. So it’s very difficult to say whether I’m a Dutch or a Liberian writer. I will leave that to the people to decide.”

Rather than belonging to any particular part of the world, Sherif notes, “In literature I feel at home.” Sherif has an eclectic taste in literature, listing Gabriel García Marquez, Isaac Bashevis Singer, James Baldwin, Han Kang, Yukio Mishima, and Yasunari Kawabata among the world authors whose work he admires. Sherif is energized by the interconnectedness that literature provides humanity, recounting with astonishment and pure delight a book talk that he was invited to give two years ago in Kerala upon translation of his first book Land of My Fathers into Malayalam.

Asked to identify the types of stories currently missing from contemporary literature today, Sherif says, “I would like to see more novels about the African-Asian connection. How it is to live as a black man in China, for example, or not even that, just the experience of being, of living, and interacting with Chinese. Or Chinese writers writing about Africans and their lives there.” As Sherif sees it, most popular literature in the West is set in America, Europe, and Africa, focusing on the interconnectedness of people in these domains. Since China has such an enormous impact throughout Asia and Africa, he believes more of its stories should be told.

Although Abu in “Flame Trees” views himself as belonging to many places and to nowhere and ultimately comes up empty-handed in feeling at ease with his place in the world, Sherif has successful bridged that gap in his own life. Literature and writing offer Sherif a broader identity than any one country could offer, prompting him to define himself as belonging to the world. “The world belongs to me. Liberia is the place where most of my inspiration comes from—that culture, that past. But the world belongs to me. The memoir I’m writing now is partly set in Liberia, in Kuwait, in Holland. And I’m writing about all these cultures as if they belong to me.”

Sherif’s memoir-in-progress, tentatively titled An Unprecedented Love and slated to appear next year, is stylized as a letter to his daughter. The memoir details both the events that led to Sherif moving to Kuwait and his life there, in addition to exploring his relationship with his mother. “I’m really enjoying it,” Sherif says of the writing process. “I thought I never had it in me because writing ‘Flame Trees’ was such a difficult experience for me. I decided it would be impossible to go back to that past again. But when I started writing, I wrote thirty thousand words in three months.” With this memoir, Sherif allows his daughter to learn more about the grandmother she never knew and passes on to her his sense of belonging, not to a set of places but to the world.

Translator Lucy Scott graduated from the Dutch language program at the University of Michigan in 2014, continuing her path to acquisition of the language through literary translation. She was helped in her translation and analysis of Vamba Sherif’s short story “Flame Trees” by Denice Gravenstijn and Annemarie Toebosch. Gravenstijn is a sociologist specializing in immigration studies. Toebosch is the director of Dutch and Flemish Studies at the University of Michigan. Vamba Sherif is a global writer based in the Netherlands whose work has been translated into English, French, German, Malayalam, Polish, and Spanish. “Flame Trees” is his American debut.