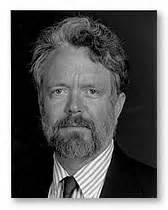 A native Virginian, Henry Taylor earned degrees from the University of Virginia and Hollins College.  In 1986 he received the Pulitzer Prize for The Flying Change, and his later poetry collections include Understanding Fiction: Poems 1986-1996 and Crooked Creek.  He also published many translations of classic texts.  He received a Witter Byner Prize and fellowships from the NEA and the NEH.  He taught literature and co-directed the MFA program in creative at American University from 1971 to 2003.  “The Hayfork” first appeared in Shenandoah 48/2.

I could get up from this kitchen table, I think,
and go see for myself whether, even how,
in the worn planks of the old barn floor
there might still be the two holes I saw made there
forty years ago, in a single second along
the ponderous time-line of farming. Well,

I might get over there one of these days.
Meanwhile, what can I see from here? We entered
the barns second story through a big sliding door
at the top of an earthen ramp. There was a haymow
on either side of a wagon-wide aisle -way.
A rail under the ridgepole ran gable to gable.

High in a dark far end, when I was a boy,
the old hayfork still hung there barely visible
in cobwebs and thin strips of sunlight
that burst between weathering boards. Shaped
like a three-foot inverted U, a giant staple,
it rusted toward absolute darkness against which

stark blobs left by last season’s mud was
stood out like white spots on a heifer.

Who knew how long it had been there? Loose hay
was giving way to bales before I was born,
though here and there I’ve seen it made, the teams
of work-horses pulling the loader and wagon,

a man with a pitchfork working everyday magic
on top of the rack, the slow ride to the barn,
drawing the load up under the rail and the trip-stop.
A man dragged the fork down, hauling against
the two-rope’s weight the forty punts of steel
with two barbed ends that grabbed the wads of hay.

Then the team, unhitched from the wagon, pulled
on the two-rope, moving away from the bard,
lifting the hay toward the roof. A click
as the trolley-hook caught, then the hay
rode back along the rail into the mow
where men forked it away for the winter.

So to a day when I was twelve or thirteen,
when the baled hay we were making was plentiful,
stacked in the mow almost up to the roof,
and we were standing around in the aisle-way
after the wagon backed out, catching breath,
getting ready to go back to the field. One man

up in the mow took a notion and snatched
at the tag-end of rope twill fastened to the hayfork,
so it whirred down the track to a place just above
the middle of the aisle-way, hit the tripe, and dropped,
all faster, it seemed then the noise of the track
could make us look up, and plunged its two points

into the floor just beside the left foot of Joe Trammel,
who stood there, leaning away from it, looking down
and then up, and round at all of us, a barnful
of men struck reverently silent in the presence of
whatever it was, the good luck that kept Joe
from injury, the bad luck that gave him his worst scare

in years, the innocent thoughtlessness that led
to that heat yank on the rope, the way things can go
for years without happening, biding their time
in a dust-whirling, cobwebby barn I can see
and smell and hear right now, staring down
at the grain in the wood of this kitchen table.