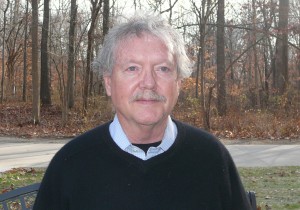 Rodney Jones teaches in the Warren Wilson Low Residency MFA Program and is a member of the Fellowship of Southern Writers.  His books include Transparent Gestures, recipient of the National Book Critics Circle Award, and Salvation Blues, which won the Kingsley Tufts Poetry Award.  The poems in this issue are from  Village Prodigies, a new collection coming from Houghton-Mifflin in the spring of 2017.

Of the one instant we might die in, if we consider it,
it has not yet happened or it is too late, and what
seems to remain of it after an hour misses the point,
and twenty years after it is like twenty years before:
a mud dauber buzzing, the burn smell of the miter saw,
some warp in the quotidian where our talk
migrated to the Steelers, midmorning light
striped and angled by the odd bunching of the shades.

That the husband was sick, gravely ill, we did not know yet
Or much of that place beyond the hardwood floor,
tongue and groove red oak in nearly flawless condition,
which I had bought for a dollar a foot
and that we were prying up from the underlayment
of the house the couple had moved out of into a trailer
where they were living while the carpenters
framed in the new house across the road.

From all we could see, he was just thin, nothing extraordinary
In his talk, a young farmer with an education.
She was the one who got our attention,
large and blond, easy with others and herself.
If you read Beowulf and come to the place
Where Wealhtheow, Hrothgar’s queen, moves among the men,
pouring mead in the great hall, there is the grace I mean.
And where could we go with that?

Only that a respect accrued from watching her
tow a wagon across the lawn, pivot, and back it into the barn.
A pleasure to see her hoeing or petting the dog.
And when she spoke, a lightness to her voice, no hint –
Though later we would agree we should have known,
so gray was his face, so drawn his mouth
when he dropped by, saying how his mother had kept the house,
the kitchen spotless, the floor always shiny and lemon scented.

Or perhaps we denied it or knew subliminally,
wedging a crowbar under each board, leaning back
and rocking gently to save the wood from splintering –
the Midwest cocked outside, the wind carving runnels in the wheat
and farther, the identical fields repeating, the houses,
clean and functional, each with its outbuildings,
farm implements, and farrowing pens – and then
one day he said, “This hospital shit is bad for business.”

The good humor of a dying man is worth something.
I do not say what. We took the floor. Courage?
Beauty? – Leukemia, she said, bone marrow –
but not like sorrow, more like the dust
shaken from the boards by the violence of the saw,
the particles before us, distinct, then invisible.
More tests, she said, and hope – the evidence
was there in the rooms going up across the field.