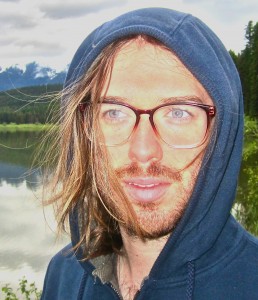 Maxim Loskutoff’s stories have appeared in The Southern Review, The Gettysburg Review, Narrative, and elsewhere. Honors include the Nelson Algren Award and many fellowships. He lives in Oregon, where his current work is supported by a grant from the Elizabeth George Foundation.

The star appeared in the sky off Orion’s leg. Bright, insistent, plaintive—a few billion miles west of his knee. Newborn, you could almost hear it crying out.

Rachel Anne lay on her back on the blue and white lounge chair in the heavy warmth of the Victoria night. Her long, pale body was barely contained by the chair’s length. A tattoo of an orange fox wrapped around her ribcage. She wore a bra and jeans. Her toes, high in the air above the frayed cuffs, wiggled slightly at each hint of breeze. Her features were drawn up toward the sky as she stared at the new light.

Trucks moaned on the distant freeway. Out across the desert all was still. Her fingers gripped the coffee-ring-stained plastic arms. The black form of Hunt Mesa loomed on the horizon like an animal that had long ago gone to sleep. She strained her ears, listening for the star’s sound.

Just before dawn, it came to her: a single, desperate note.

Her husband shuffled onto the porch. Bleary-eyed, he looked across the barren expanse of the yard stretching seamlessly into the flat plate of the desert. The chair and his wife in its center. Her pale skin glowing and unreal, as if she had been lowered there, suspended by two silver threads from a starship, before the threads disappeared and the ship flashed away.

Hungry. The word appeared like a struck bell in her mind. The star was hungry.

Her husband made breakfast. Egg whites and peppers sizzling in a cast-iron pan. Carefully, he served them onto two plastic plates. She sat at the table looking down at her hands.
He ate. He touched her cheek and then he went to work, his old sedan coughing down the driveway.

Rachel composed letters to Australia’s leading astronomers. At the research stations in Parkes, Coonabarabran, and Narrabri, the compact array, CSIRO. In the letters, she described herself as a single mother from Adelaide, an amateur physicist, a lover of the cosmos, a waitress.

She sent a copy to the Journal of Interstellar Phenomena, hoping they’d see a human interest angle in her story. A generation of caravan-park girls gazing up into the night.

The young star burned hotter, sending off focused jets of gas and radiant light for trillions of miles. Planets formed in the orbiting mass of dust. Some of them were blasted from the sky before they even had the chance to harden.

As the December nights grew more humid, she took to leaving her clothes, piece by piece, on the creosote. Lifting her shirt over her head and letting it trail from her finger before falling amid the cacti and fire ants as she walked to the chair. Kicking out of her jeans—the smell of onion grease saturated in the denim.

The star’s light was milky on her skin. It spread across her thighs. She arched her back, tilting her hips right and left, rolling up on her spine, turning over completely so the light could touch her everywhere. She was revealed. Translucent. The pulsing valves and empty chambers beneath her surface.

Her husband watched from the bathroom window, his heart pounding.

“I’m pregnant,” she said, as he straightened the insurance policies stacked inside his briefcase.

The morning sun divided his forehead. He smoothed down his thinning hair.

“Rachel,” he said, his face haggard in the small hallway between the kitchen and the front door. “Please.”

It was true, something was growing inside her. She refused to go to work. She wrote more letters—to the hosts of daytime talk shows, members of parliament, an ex-lover who was now a professor of anthropology at Christchurch University. A newborn star, she told them. West of Orion’s knee.

She checked the mailbox every day for a response.

Flyers for a tennis club, an art walk, a mattress sale. Bills. An international letter from her mother.

Rachel’s blood was still in the pipes somewhere. It had joined the other embryos and life tailings in the steel veins of the city.

She slept most of the day. She lost weight, believing the star would sustain her. Styrofoam takeout containers accumulated in the refrigerator. She only opened the door to put her head inside. Feel the cold. The light. She was in a state of rapture. Even in daylight she could see the tendrils of her star stretching through space. Never slowing, never wavering, until they found her here on this arid patch of earth, standing beside a sun-bleached plastic slide, her hand on the warm plastic, the empty clothesline humming in the breeze.

The creature was born fully-formed. Using its powerful pincers, it pulled itself from between her legs and raised its head. Obsidian skin stretched across its horned carapace, incandescent violet at the edges. It raised a double-jointed limb. It opened its mouth so the slender, waving barbels could taste the air.

She held out her hand, wanting to touch the slick exoskeleton. Exhausted, empty. Wondering if she would ever be able to love again.

It hardly looked at her. Taking its first, tentative steps, it struggled from the pool of fluid on the chair, tumbled off the end, and scurried into the desert. Its six legs quickening into rhythm.

“Won’t it ever be enough?” her husband asked, when she padded into the kitchen, her face wet with tears. She passed by him wordlessly. Her bare feet on the cool linoleum, her fingers clasped over her stomach.

A trillion stars in a trillion skies, but that one had been hers.

1 Response to West of Orion