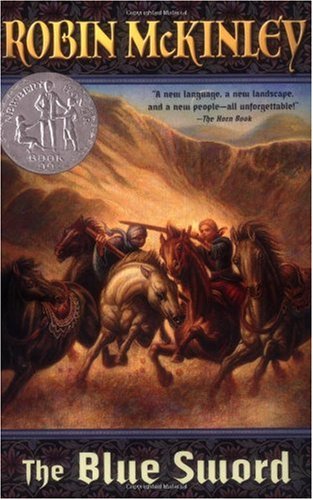 The Blue Sword by Robin McKinley is an engaging read for adults and children alike. In this crossover novel, published as Middlegrade, the textured culture, traditions, and history developed by McKinley is so rich and believable it will leave you wanting more. In The Blue Sword, a young woman named Harry moves to her brother’s posting at an outlying military post upon the death of her father and gets caught between her homeland and a dwindling aboriginal country.  Harry is kidnapped by the desert people where she learns about and falls in love with their culture. Ultimately she must decide between her two worlds and her role in an approaching war. The Blue Sword is a Newberry Honor Book, ALA Notable Children’s Book, Horn Book Fanfare and an ALA Best Book for Young Adults (1).

McKinley’s writing is thoughtful and sharp; the narrative voice is warm and innocent but not naive. Harry develops into a strong female protagonist that makes a place for herself in an unsure world while earning the respect of the more experienced males. She is reminiscent of Sabriel in Garth Nix’s Abhorsen trilogy with similar attributes to Arya Stark in George R.R. Martin’s A Song of Ice and Fire series. If you are an adult reader interested in the hype surrounding Crossover Young Adult or Middlegrade fantasy, The Blue Sword is a great way to get your feet wet.

1 Response to The Blue Sword