Appomattox: A Surrender and a Restoration 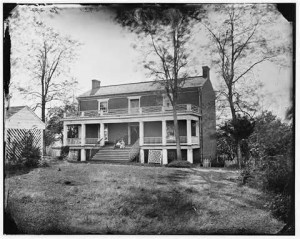 As fifties Georgia boys (and, after a move, Tar Heel boys), my running mates and I were furiously partisan, recruiting even the birds of the air to our Lost Cause. The aggressive, squawky jays we called “Yanks” for their colors and habits. Cardinals and mockingbirds we conscripted as “Confederates,” though we were much taken with the idea of calling ourselves “rebels.” We took our make-believe onto the scabby lawn and pine woods, corn rows and pastures; we ambushed hens, captured calves, taunted Federal hogs in their POW pen, generally co-opted the birds and beasts and weeds to our bellicose recreation, which we never saw as mere amusement. “Our folks” had been invaded and conquered, and we wanted to do better next time. As one of Lee’s “Miserables” (“a ragged private,” according to Shelby Foote) said after the surrender of the Army of Northern Virginia, “We’ll go home, make three more crops, and try them again.” As a Wolf grade Cub Scout, my sentiments exactly.

Our manual of conduct and rules of engagement came right out of Freeman’s revered biography of Lee, which resided in my grandfather’s barrister bookcase, the Pulitzer edition gold-leafed with scarlet fields for the words, featuring Lee’s profile on an embossed leather cover that hovered, depending on the light, somewhere between blue and gray, a phenomenon which remained a puzzlement to me. I didn’t understand much about the politics or the psychology of the narrative, but I could decipher the maps and maneuvers, shudder at the rowed-up corpses in ditches and bristle with pride at the noble faces of gentlemen generals posed for Brady’s cadre of photographers. Outside of books, there was a historical marker beside the railroad track on the east side of Griffin that proclaimed that site a way station for Union (or “Onion” to us) prisoners en route to prison camp, so we overturned logs, switched the ragweed and scraped the clay under the hottest sun whenever we could hitch a ride over there in somebody’s truck bed. We found scraps of metal and jerky-like leather, but nothing I could dignify with the term “artifact,” though I had a cousin who claimed to have dredged up half a canteen. The Singleterry brothers had a collection of minie balls, and a boy from church claimed to have on three separate occasions seen the downtown granite statue of a bearded Georgia volunteer stir on his pedestal in the moonlight. We believed what we needed to believe.

This was not an ornithological phase of my life. I loved the fact that chicken hawks and red-tails were common, bullet-quick hummingbirds unable to resist the althea, whip-poor-wills available for dusk serenade and doves purling from can’t-see to can’t-see. Flocks of yellow birds and red birds and blackbirds who even bore scarlet insignia on their wings were also abundant. Many seemed to maneuver in formations that could result only from rigorous drill. Except for the few skirmishes when we ambushed seed herds of Yanks, I didn’t much confuse the steady medley of birdsong and our higher calling – the rebel-yelling merciless vanquishment of phantom “mudsills” from up “No’th” – but I was young, indoctrinated, versed and rehearsed in the scriptures and talismans, the ceremonies and campaigns of the Civil War and all its supposed glory. The central role of subjugation, human-ownership, slave trading – that had no more reality to me than gossip, or a sentence in a picture book at school. Even when news of the Civil Rights movement filtered down to our level of awareness, it was enigmatic and seemed to be related to jobs more than voting. Since Griffin was a mill town, I translated civil movements of all stripes to labor discord and filed them away with the skill of a denial specialist. How all those people of color got to Georgia, I had only a hazy understanding, and my primary perception about them was that they swam among us, though in a different current, and seemed to invite the unearned censure of white adults in the same ways we boys did, providing a kind of common cause. I was seven, eight, then nine, “Dixie”-smitten, enchanted with occasions of “great pitch and moment.” And after all, the centennial celebration was just around the corner, and we were all bewitched with the predicted hoopla and hoorah in the offing – fireworks and re-enactments, flags, cannon, spurred horses and shelves upon shelves of new books, many aimed at pre-pubescent boys like me who needed heroes and lots of illustrations.

Manassas, Chickamauga, Chancellorsville, Fort Sumter (I’d been there!), Shiloh (there, 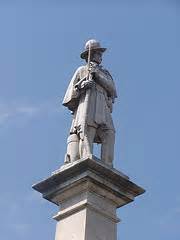 too), the Wilderness and Kennesaw Mountain (a frequent day-trip destination) – these were the legendary sites; as J.E.B. Stuart, Stonewall, Forrest, Belle Boyd, Pelham and Lee were the idols, and the talismans were Colt’s Navy, Parrot rifle, cavalry sash, regimental pennons, a lock of hair from some fictional Aura Lee. Needless to say, Appomattox was not part of our litany, nothing like a shrine. We saw it as the shameful location of the beginning of the end where the colors were struck and the cause was truly lost. I was more willing to visit Gettysburg and cross that wheat field where one ancestor went down, eager to see what Lee saw and strain to comprehend why he made his fatal mistakes, instead of wheeling around and marching his forces, which were perfectly situated between Meade’s Army of the Potomac and Lincoln’s inadequately protected kitchen and parlor and the office where he plotted with his henchmen. I was even happy to walk the rotunda of the Cyclorama in Atlanta, though the great circular mural and foreground manikins recorded the failed defense of that city, and the conflagration that followed. But I did not desire to see Appomattox Courthouse, where God’s apparent judgment was made official in a rainy April of 1865 (the cruel month when Fort Sumter’s Yankees had refused four years earlier to yield until they took hot shot and hell and lost their nerve, so that the first surrender lit the powder keg; also my birth month, a fact I thought auspicious).

Click here to read the rest of the editor’s note.