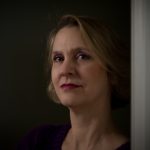 The body flew on a different plane, arriving in Detroit two days ago, at 7:37AM.  She tracked its arrival online.  Not a soldier or a famous politician, just her husband, age thirty, suddenly dead.

Now she was in suburban Detroit, being carried along an anonymous highway in his mother’s Lincoln.  People drove as if they were tense, feeling the crush of that low, grey sky she remembered from their visit two Christmases ago.   The graveside service was in an hour, followed by a “celebration of life” at a country club.  There would probably be balloons released outside, heartfelt notes tied to them with ribbon.   She stared at the parade of silver-paned office buildings out the window.   His mother’s voice was something broken that wouldn’t stop making noise.

Finally they reached the cemetery, that modern kind, with stones flat in the ground to make mowing easy.  The spot his mother selected seemed exposed, exactly in the center.  She was taller than any of the slender trees.

People pressed her hand, clutched limp tissues.  There were old high school girlfriends, all pretty.  Though it was cold, no hats.   The box with the body in front, blanketed with white roses.   A stand displaying his smiling graduation photo.  A CD of songs he wrote for his college band, The Elements.  The scene felt arranged, like a movie set of a sad funeral.  She imagined everyone at home afterwards, sponging off make-up, peeling away costumes, slipping into bathrobes to relax after this hard day of work.

A minister with a square head spoke.  God this, heaven that.  She’d heard it all before.
His mother wept so loudly she startled the crows looping overhead.

When she exhaled, frost clouded the air.

Later, his mother pulled up to the airport curb and said, “Promise you’ll come visit,” and they both knew she wouldn’t.  She watched people wheeling black suitcases, in a hurry to leave Detroit.  Though she didn’t believe in God or heaven or worshiping a flat stone, she half-envied those who did, those who thought it could be so simple.  She said to her former mother-in-law, “Maybe spring.”

“The marker will be in then,” his mother said.

“It was a beautiful ceremony,” she said.  “I’m so glad.  All those Mylar balloons in the sky.”

“Did you get a photo?” his mother asked.

She nodded, patting her coat pocket as if a phone was in there.  “There’s just one last thing.” She hadn’t cried today, and it was important that she not cry as she said, “It was bugging me the whole time that maybe they’d put him in upside down.”

“That his head was where his feet should be.”

“They wouldn’t do that,” his mother said.  “They don’t make those kinds of mistakes.  There’s hinges on one side.”

“I kept thinking about it,” she said, which was true.  “I couldn’t get it out of my head.”

His mother spoke urgently:  “It doesn’t happen like that.”

“Don’t lots of things happen that we think won’t happen?”

His mother tightened her face.  “Have a safe trip.”

The sound of the car door opening, then closing, was loud.  Strange not to have luggage, to float so lightly.

On the flight home, she knew there’d be a time she might wish she hadn’t acquiesced to the anger nudging her to speak those unforgivable words to her former mother-in-law.  But that wasn’t today.