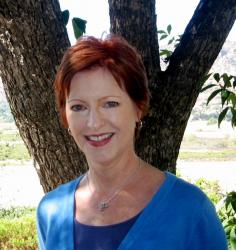 Dawna Kemper’s stories have appeared in Colorado Review, The Florida Review, Quarterly West, Santa Monica Review, The Idaho Review and The Kenyon Review.  Her stories have also been nominated for Pushcarts and listed as “Notable” in The Best American Nonrequired Reading 2009.  Her new work is forthcoming in Zyzzyva.  For five years she served as editorial assistant at The Santa Monica Review.  She has completed a collection of stories and is working on a novel.

This prized fish on the wall in our suburban split-level is a rainbow trout, an identification I know because my husband made a point of telling me this, more than once, when he brought the fish home from the lake. When I forget what type of fish it is, the engraved brass plaque beneath the rainbow trout is there to remind me. There is no rainbow on this trout, though; just one long rosy band down the side that flares like a blush on the gills. Also, the fish’s skin is dotted with black speckles. So “rainbow” is not necessarily a given, not something I would naturally intuit about this fish. I admit I only know one side, the fish’s left side, but wouldn’t one safely assume its other side is more of the same? Sometimes I wonder though. This fish appears to have been pinned mid-leap to the wood behind it, as if it leapt up and got stuck there right in our dry house. The long curve of its body looks pliable and at the same time frozen stiff. The fish is empty. That silent open mouth with the underbite concerns me; it makes the fish appear at an utter loss to explain its circumstances. Its left eye stares at me when I use the chamois to clean the cobwebs from its gaping mouth. I’m most careful when I wipe the artificial tongue.

A real trout’s tongue is quite long and barbed.

Mounted just above the fish’s head is the jig, in other words, the hook and lure the fish swallowed. This jig resembles a flashy skirt that hides the hook. When this fish swallowed the hook, the hook lodged deep in the back of its tongue and stayed there. Even if it had not grown to an unfortunate trophy size, this fish was a goner. My husband refused to cut the line to release the fish; he wasn’t about to lose that lure. Now the lure is mounted right there alongside the fish’s mouth, just out of its reach.

My husband likes to tell the story of how he caught this fish. “True story,” he always begins. I’ve heard it so often I sometimes misremember; I get confused and become convinced that I was the one out on the clear lake that day with my rod and reel, that I was the one who saw this amazing thing leap straight out of the water into blue sky, saw it flash and twist high in the sun, that I was the one who felt the splash on my cheek when it dropped deep back into the cold lake. And I am the one who feels a suffocating sadness when I recall how strong this fish was while it fought.

To land such a fish as this is rare. When you fish for trout you must make that jig dance just so.

The fish is mounted over our bed. For a trout, this fish is enormous. When I look at it long enough, yes, I can see that it’s beautiful; but also that it’s monstrous. Its length is nearly as wide as our bed. My husband says it weighed over 39 pounds. Not anymore. This fish has been hollowed out. My husband paid a fortune to have it done. Its stripped skin has been expertly dried and stretched over a frame that restores it to its fish-like shape. Its gleaming scales are polished and sealed. At night, before my husband turns out the light, I stare up at its pale silver belly. When we make love, I close my eyes and dream of leaping into fresh water.