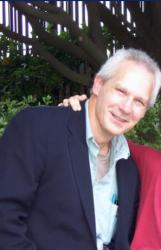 Thomas McConnell’s work has appeared in the Connecticut Review, The Cortland Review, Yemassee, Emrys Journal and Crossroads: A Southerm Annual.  His honors include a Porter Fleming Award, recognition from the South Carolina Fiction Project, the H. E. Francis Award and the Hardagee Award for Fiction.  He has lectured and read in Berlin, Istanbul and Paris, and he serves on the editorial board of Hub City Books.  Educated at the University of the South and the University of Georgia, he is now professor of English at the University of South Carolina Upstate.

Let me tell you bout my boy, she says, the way they do, the gnarled walnut knuckles working like the gnarled walnut of their cheeks swollen with that pride that slows her speech from the gallop it also wants her to take. But let me tell you, she says behind eyes dream ridden, about my boy, my boy’s boy, she means, her grandson, he’s the grandest thing she’s ever seen. Can play ball all day and not be too tired to watch her roll the biscuit in the shack of a kitchen out behind the shanty they inhabit, the flour powdering the cutting board, the floorboards when she sighs too hard. And he does well enough at school though those books fall apart at the spine and the mouse gnaws the corners where they’re stored back in the schoolhouse over summers, summers when he picks her a long stemmed weed that flowers and brings it to her from beside the road where he walks in the ditch when a car comes, well into the ditch because you never know who’s boiling the dust down that road, could be anybody, but he brings the flower with white petals dust speckled. And the little girls like him because his cocoa skin comes over those cheekbones that must owe something to that Cherokee down the line before they all moved north back in the day, the one with the ebony hair long past his shoulders that they had a tintype of once long ago but it warped and peeled in one fire or another. Noble looking man without a wrinkle round his squinting eyes. Whatever happened to him. But it’s that boy she wants to speak of, her boy’s boy, so lively and quick limbed, a caution with his bright eyes that grin though there’s a tooth missing from where that white grocerman kicked him at the fair. And he grows fine and tall and lone pine straight and when the war brings his turn he signs for the army and he’s in Ohio and New Jersey and then over there in France and Italy and she doesn’t know where all and when he comes home there’s a parade for them, for the black boys who went by the train from their side the tracks, a parade down their unpaved street and they’re all so sharp in those uniforms with the razored line in the pants legs all marching to time despite the dust to the flag whapping in the breeze at the head of the column and he’s got a medal on his pocket but when they try to describe to her what it’s for she has a hard time breathing it in because that world aint her world and never will be and she’s mostly glad and sleepy. So pretty soon he’s got him a girl of course and he’s so good he’s only got the one girl though the way they talk he could have them all, that gone tooth don’t matter to his smile, and then he’s got a boy of his own and that boy plays ball too in the pasture he’s let to play in with the other boys south of Main and that boy too has those same Cherokee cheekbones thank Lord that will mark him out as the envy of girls and not take after his mama who runs around but this boy, this newest one, the littlest one, her great grandson, four generations to account for now before you can fall asleep good, also brings her a flower from side the road, the same white weed that leans into the barbed wire and so gets protected from the mash of cattle and feeds on the lush water from the ditch when it rains and she squints at him there bringing her his flower in a hand palsied like hers only he never does because that boy she wants to tell you about in the beginning, her only grandboy, was never born at all except in the womb of sleep she sobs to wake from because his father, her own first boy that she fetched in her belly through ten moons and yet another winter rich with cold suds and bleached wash, never grew up to sire her any kin because one night while he was twenty during what they called the Red Summer of 1919 when the devils broke with hell after that first war and everone of them was stalking streets for Bolsheviks and work that there wasn’t enough of to go round he was hauled from the jailhouse (where they said he’d raped a white woman which he never did) and strung at the lamppost and burned alive with a chest full of lead over a pile of lumber and if you go back into the stacks of that yellow newspaper you can see his body still for yourself lying in a state of flames, the sphere of the skull fired clean of features, the broiled torso glowing in black and white, the legs or what’s left of them melting into the wreckage of the fire, it’s all there, the posers with hands on hips and grinning cigarettes, gawkers in good hats and even a laughing woman in a belted coat making the background of the night lit by the pyre of her boy’s body, her boy slowly refined into the night of his execution when she can’t sleep and for what.

6 Responses to Her Last Boy