A Face to Meet the Faces: An Anthology of Contemporary Persona Pieces

Nick Ripatrazone’s novella, This Darksome Burn, is available from Queen’s Ferry Press. His debut collection of short fiction, Good People, is forthcoming in 2014 from Foxhead Books. His writing has appeared in Esquire, The Kenyon Review, Pleiades, The Iowa Review, Colorado Review, and The Mississippi Review, and has received honors from ESPN: The Magazine. Nick can be found online at www.nickripatrazone.com. His “Cribbing Collar” received honorable mention in this year’s Bevel Summers Contest.

A Face to Meet the Faces: An Anthology of Contemporary Persona Poetry
edited by Stacey Lynn Brown and Oliver de la Paz (Akron, 2012)

Dislocated Identities, Found Personas
Edward Hirsch notes that persona poetry originates “in archaic rituals where masks are independent beings that possess the ones who assume them,” resulting in the animistic “displacement of the poet’s self into another existence, a second self.” Hirsch quotes W.B. Yeats that the poet “never speaks directly as to someone at the breakfast table, there is always a phantasmagoria.” Each poetic or imaginative act is a form of persona, but persona poetry is the acknowledgment of disruption of the self’s shape, like a phantasmagoric, lantern-projected image onto an uneven rock wall. 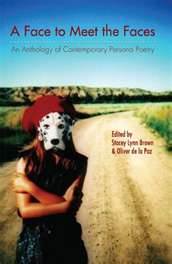 A Face to Meet the Faces offers nearly 500 pages of persona poems arranged by both content and theme. Sections include historical figures, characters from mythology, folklore, popular culture, religious figures, fairy tales and other imaginative literature, as well as adoptions of the voices of poets and fiction writers. The editors have compiled a generous sampling of both established and emerging voices. Blas Falconer documents Diego Salcedo’s 16th century murder that preceded the Taíno rebellion. Tony Trigilio channels Lee Harvey Oswald’s confession to his father. Kazim Ali renews the Icarus myth. Jericho Brown performs as Diana Ross in “Track 4: Reflections.” Cornelius Eady elegizes Emmett Till through the young man’s glass-top casket. Patricia Smith braves the hate of a skinhead who has “my own beauty.” Susan Rich’s midrashic “Sarah’s Story” compliments the treatment of Isaac by William Robert Flowers. Philip Memmer shares a new magician’s assistant hopes to better her predecessors who have worn “the same short sequined dress.”  The collection spans moments of seriousness and absurdity, all glued by the transformative act of persona.

The poem is narrated by a group “urging their horses forward, watching ribbons / of steam rise from their flanks.” In the only metaphorical reference to the structures of Los Alamos, “Crises’ steel shoes sang / on the sandstone outcrops.” Moonlight is found “down by the river,” where “the boatman slept in an old alder shack / between two palms.” Though the boatman is unnamed, the postwar context, along with Oppenheimer’s poetic self-awareness of his role in the machinations of death, intimates Charon. Here Canaday revises the language of Oppenheimer’s own poem, “Crossing,” written at Harvard. Oppenheimer’s poetry induced Paul Dirac’s infamous jab: “I understand that you are writing poetry as well as working at physics. I do not see how you can do both. In science we say something that no one knew before in a way that everybody can understand. Whereas in poetry . . . ”

The poems of Oppenheimer and Canaday share content: several men on horseback crossing a river, a moon lost behind mountains. Phrases are nearly replicated: Oppenheimer’s “ranges barring the sky” has become “High slopes / barring the sky.” Yet Canaday’s divergence from Oppenheimer’s original poem creates a successful work of persona. Oppenheimer’s poem was written long before the reality of the Manhattan Project, and could be set anywhere in the Southwest. Canaday’s version is set on the Rio Grande, so that the riders see their boatman in the shadow of the bomb’s development. Oppenheimer’s boatman “called to us”; Canaday’s boatman sleeps. It is the riders, not the boatman, who “called farewell,” and only the “tamarisks replied” with “salty breath” before their “dry leaves . . . flickered like candles / and went out.” A soft ending to a poem about a man instrumental in developing a most dangerous weapon.

A Face to Meet the Faces moves beyond refiguring historical personas to contemporary poets adopting past voices. Matthew Nienow’s “Walt Whitman Sings Happy Birthday to Himself” works well. In the preface to the 1855 version of Leaves of Grass, Whitman nearly contemplates such persona attention: “The greatest poet forms the consistence of what is to be from what has been and is. He drags the dead out of their coffins and stands them again on their feet.”

The 25-line poem is one sentence. Commas nudge the narrative forward, but the form never feels convoluted. Nienow resists the urge to elevate Whitman. The poem begins “Down the uneven plank stairs, down to the cellar-world” choked by “thick smoke.” There, “the low rumble of a hundred men” become one, joined by Whitman. They all “have come here, to celebrate / or curse the fact of our being here.” Though Nienow indulges, like Whitman, in “myself,” the personal reflexive is tempered: myself “is also to drink to you / for we are of the same flesh and must sing to say so.” Whitman, after “the long night among other men, smelling / still of smoke and earth,” returns to the now quiet city to “sing myself another year in this lingering body.”

Visitors to Whitman’s 1891 birthday celebration included the painter Thomas Eakins, who, speaking of painting Whitman, said “ordinary methods” were insufficient; “technique, rules, and traditions would have to be thrown aside; that, before all else, he was to be treated as a man.” Whitman’s confidence and voice threatens to burst through Nienow’s own words.

Not bound to the real, A Face to Meet the Faces also offers fictional personas. “Pinocchio’s Elegy for the Unreal” by Ariana-Sophia Kartsonis offers a continuation of Carlo Collodi’s serialized novel. In the novel, still-marionette Pinocchio is chased by assassins, and seeks refuge in the house of a “lovely maiden” who claims she is already dead, simply “waiting for the coffin to take me away.” Once Pinocchio is captured the narrative turns from sardonic to violent: the marionette is lynched, but as an unreal child, death is not possible. Pinocchio is taken down and wrapped in sheets. One of the doctors summoned, the Talking Cricket, calls Pinocchio “a rascal of the worst kind . . . rude, lazy, a runaway,” but he survives.
Collodi’s novel ends with Pinocchio’s strange transformation into a boy: his wooden form is “leaning against a chair, head turned to one side, arms hanging limp, and legs twisted under him.” So the gift of life is one of displacement, the passing away of an old body. Collodi ends the novel abruptly, and the story begs continuation. Kartsonis offers the next act with Collodi’s wit. Geppetto, “who once pulled my strings, / knit the motion to my dance, tied to me / somewhere inside even now” is “deep in the sleep of death.” Now “you’re on your own.”

The speaker misses “the certainty of my ligneous hands” and that a “torn finger can’t be carved anew.” Unfortunately, with humanity comes mortality: “I wish you’d told me about the way it feels / to be watching life from a dying body.” The poem evolves from sarcasm to a concerted lament, as the speaker longs for moments of the unreal, since he “can still hear the toys talk, still hear the whispers / of the inanimate world, the soul of objects.”
The poem ends with a return to Geppetto’s workshop, where “every old tool dreams of your hands, / your smoothing grip.” There, “veiled with cobwebs,” a spider “unlaces a luna moth, a dinner / too huge, too gossamer to be real.” In these final lines, the poem and novel coalesce, reaching another layer of story. Such conversation between poem, precedent, persona, and variations might be the best result of A Face to Meet the Faces, and of the persona act.

Donald Hall finds possible “dangers” in persona poetry, exampling the work of TS Eliot and James Dickey. In “The Self as Agent,” Dickey explains that each poem “is both an exploration and an invention of identity.” All poetry, for Dickey, is fiction, so critics should not expect autobiography or consistency of personality across works. For Dickey, a poet’s worth is synonymous with multiplicity of personality. Persona “gives the poet a chance to confront and dramatize parts of himself that otherwise would not have surfaced.”
Hall posits that Dickey’s usage of persona might be an act of poetic cowardice, saying “we want him to try to find out what it means in his own life.” He finds that Dickey “does not accept the risk of his search . . . Instead, he uses a persona as a way out.” Such criticism might be valid in a particular, political realm, but the act of persona poetry is not the avoidance of the “I,” it is an acceptance and qualification of the “we.” Empathy–poetic or otherwise–is not easy, and the dramatic monologues of persona poetry offer valuable experiences for both reader and writer. Distortion of truth and identity is good for the breakfast table, as well as the page.

1 Response to A Face to Meet the Faces: An Anthology of Contemporary Persona Pieces