Barbara Benoit’s poems have appeared in Cimarron Review, Slueline, Slipstream, Naugatuck River Review and others. A recipient of an Artist Development Grant from the Vermont Arts Council, she holds an MFA in poetry from New England College and is pursuing a second MFA at Eastern Kentucky University. 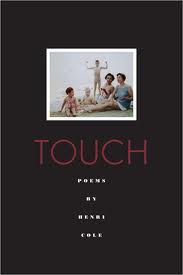 In the absence of end rhymes, the voice in each of Henri Cole’s otherwise sonnet-like poems rises like ether from moist, cold ground. The separate parts mingle and merge, doing what the title suggests: they touch. Like a transparent vase, the poems are given just enough architecture for the naked experiences to appear within them. While his colloquial, accessible voice makes the poems easy to read, they are emotionally difficult because he offers the reader an unblinkered glimpse into his reality.

The three sections of the book focus on (as the dust jacket tells us) “…a mother’s death, a lover’s addiction, war…” Section I, titled Don’t be an open book, Mother, contains the title poem, “Touch.” This poem radically breaks away from the sonnet form, employing indentations and varying stanza lengths. It economically evokes the image of the “I” lying in a pine box by using relatively short lines and a simplicity that strikes by its directness.

In a hospital morgue,

I lay in a pine box

propped in a simple tiled room

This matter-of-fact voice continues to assert itself, creating a visceral experience of what it must feel like to be in a coffin. “White satin covered me to the waist / and was crudely stapled / around the edges of the coffin.” The reader can see the uneven staples, the sloppy attention paid to the elegant satin. This crudeness asks us to look at our attempts to beautify the dead. Cole can be with his mother only if he enters the casket with her, further evidenced in the third stanza:

Then I lay down beside you,

and the white maggots wriggled.

Though they didn’t know where they were going

they made the prettiest song of all.

These last two lines are absolutely earned. If we were to lift them out of the context of the poem, they’d appear platitudinous, especially “the prettiest song of all.” But here, they bloom with a poignant ache.

Throughout the collection, Cole turns his back on artifice. Whatever truths his book offers leap out of the poems’ blue-collar hours. His speaker seems unfettered by shame as he maps his vulnerability awakening in dark places. This commitment to “telling it like it is” deepens his poetry. The title of the poem, “Resistance,” strikes me as ironic, as the poem speaks more to the inability to resist, the opposing concepts facing each other the way the lovers in the poem do in the same torn bed. He tells us, “I didn’t go to him for virtue” and “I wanted to know what it felt like, eating honey like a wasp.” I’ve been told that wasps don’t eat honey, and I wondered if this were an oversight on Cole’s part, if he’d gotten his facts wrong. However, he may have intentionally used this waspy falseness to suggest the speaker’s spurned desire in the poem, his not really making love any more than a wasp really eats honey. Or perhaps he was trying to walk the thin line between the polarities of sweetness and sting. He gives in to his desire to taste what his drug-addled lover tastes, even if that includes the shame that goes with it. He makes an art of his willingness to lose everything and doesn’t dilute the power of that choice by anesthetizing the language: “Loser old man u r a cheap cunt,” he writes. “I need coke. Unless ur buying, the answer is no.”

Cole constantly goes back to questions of the self: what it is, where it can go, or who it becomes in relation to outward events and the collision of consciousness. Is he referring to Christ or himself in “The Flagellation” when he says, “I am afraid to fall down, / but I will not be dominated”? Through this highly-accomplished collection, Cole shows us that he will not be dominated, that he won’t give in to anything but his personal version of the untrammeled truth.

1 Response to Touch by Henri Cole