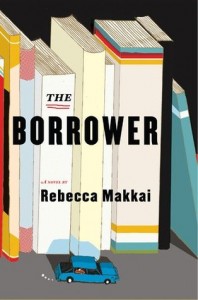 The concept of revolution is formed around and nuanced by abstract conceptions of change, of emotion, and of hope. Providing a succinct definition for such an intangible idea is a near impossible task. What makes a revolution? And, maybe more importantly, who makes a revolution? In her first novel, The Borrower, Rebecca Makkai tackles these questions as well as the more subtle themes of identity formation, the self-concept, and the possibilities of future generations. The Borrower is indeed the story of “a would-be revolutionary stuck at desk,” in other words, “a dormant volcano.” Exploring family, memory, and what it means to dream, Makkai uses straightforward yet somewhat psychological prose to create the story of a journey that is motivated by the impossible pursuit of knowing who you are and how you came to be that way. This very idea of the impossibility of knowing, of being able to grasp one’s self-concept, is reflected by the many surprises found throughout the novel, a feature of the story which makes it difficult to discuss without undermining the author’s strategy.

Reading and revolution are parallel strands in the novel. The novel’s protagonist, Lucy, is a librarian who comes from “a long line of revolutionaries.” Almost trying to escape the limitations of her Russian upbringing, and the secrecy thereof, Lucy takes a rebellious path that leads her to one of the least controversial places: the children’s section of a library. Facing a crisis of identity and the struggle to find out who she is as a result of where she came from, Lucy finds herself in a position many mid-to-late twenty-year-olds find themselves in. Graduating from college and striking out from home has not led Lucy to either an ideal life or a mature self-awareness, and the novel explores the ways in which people achieve a well-rounded perspective of who they are and who they want to be. Soon, Lucy looks to a person much younger than her to understand how to fashion an identity out of one’s dreams.

Lucy’s dynamic relationship with an intellectually curious, and possibly homosexual, ten-year-old boy ultimately leads to an unexpected kidnapping and a revelatory road trip. Bound up in this journey is the pervasive idea of freedom, and the possibility of earning freedom through a revolution of one’s own personal experience. Lucy constantly struggles to resolve her desire for “endless possibility” with her “librarian’s sensibility,” and her adventure with Ian only seems to upend her understanding of herself. However, Lucy is not the hero of this story, in fact, she “might be the villain.” At the core of the novel is Ian, a boy who is so full of potential and offers the possibility of what the life of a dreamer, and a revolutionary, could truly be like.

Ian’s family background is rather troubling. Struggling to find his expressive voice in his fundamentalist Christian home, this active mind finds freedom in the many books that he reads. For Ian, the library becomes a place not for escape, but rather, a sanctuary where he can broaden his scope of the world and develop his perspective of possibility. As Lucy fights to understand her past and sort out her present, Ian provides a sense of potential, and where revolution could lead. Furthermore, the hopeful future Ian represents is one that can be found in the everyday lives and experiences of normal people. Makkai unites the reader with Ian by demonstrating that, although his life has its own flaws and tragedies, these are not the tragedies of the heroes so often found in literature. Ian’s spirit of revolution and dreams of freedom are the dreams anyone who has ever experienced containment or limitation can recognize.

Suffice it to say, Russian mobsters, a relentless ex-boyfriend, and a serious lack of money do not make Lucy and Ian’s quest any easier. Potential consequences of their journey always lurk in the back of Lucy’s head, from her fear of legal consequences to the ideological consequences of returning Ian to his overbearing parents and the troublesome Pastor Bob, Ian’s spiritual adviser and teacher of “anti-gay” classes. Although the novel pushes us into the microcosm of Ian and Lucy’s world, which seems safe and almost wholesome despite the illegality of the situation, it is impossible to forget the realities of the outside world, and the absurdity thereof. Throughout their quest Lucy has to develop a complex set of lies, and constantly has to answer questions about who she is and where she is going, and this inability to truly escape from the limitations of everyday life demonstrates an accountability to others that can be both nourishing and destructive.

Makkai employs mature techniques, imbuing each character with a well-developed complexity that forces the reader to constantly question and examine what it means to be a hero, a villain, a child, or a librarian. The depth given to each character allows the reader to wonder about the very nature of what makes a person moral, corrupt, or happy.

Ultimately, the narrative shape of the novel is almost cyclical, and the conclusion finds the reader returning to many of the themes and challenges presented at the start of this novel. Lucy’s struggles in the beginning of the novel remain persistent to the end. Revolution has to be read alongside this repetitive notion of time where “you can’t keep going, you can’t go back, and you can’t stay here.” Indeed, the novel itself does not remain self-contained. By the conclusion of the story the reader is left as unsure and wary of the future as Lucy. She thinks to herself, “What happy ending could I have been nursing, this whole time? It lurked there like a dream, half remembered. There was a picture from somewhere of a place I would take him, maybe a place from a book: a white-walled, sunny house where people took care of children, where they would explain everything and let him stay there forever or until he was strong enough to face his parents. Or we would all launch out together in our happy little boat and forge a new country on new land rising from the ocean foam: an ideal America finally again.” Urging a new evaluation of how to consider endings, happy or otherwise, Makkai hints that perhaps what is considered satisfactory in the present condition is just not enough.

Trying to understand what makes Lucy an admirable character is perhaps where Makkai’s strengths shine through. The push and pull between like and dislike, sympathizing and condemning, forced upon the reader reveals the complexity of Lucy and perhaps the complexity of all people living in the modern condition. Lucy’s story demonstrates the plethora of choices people make every day, and her mistakes show how incredibly important every choice can be. In many ways, The Borrower is a timeless story of human connection and impact, and how the choices we make can deeply affect others around us. It is Makkai’s astutely chosen words and her ability to weave themes that have always concerned the human condition that make The Borrower an excellent read for those who like to ask questions and those who appreciate the pursuit of finding answers.

Tracy Richardson is the editor of Washington and Lee’s student literary magazine Muse and is currently Assistant editor of Shenandoah.