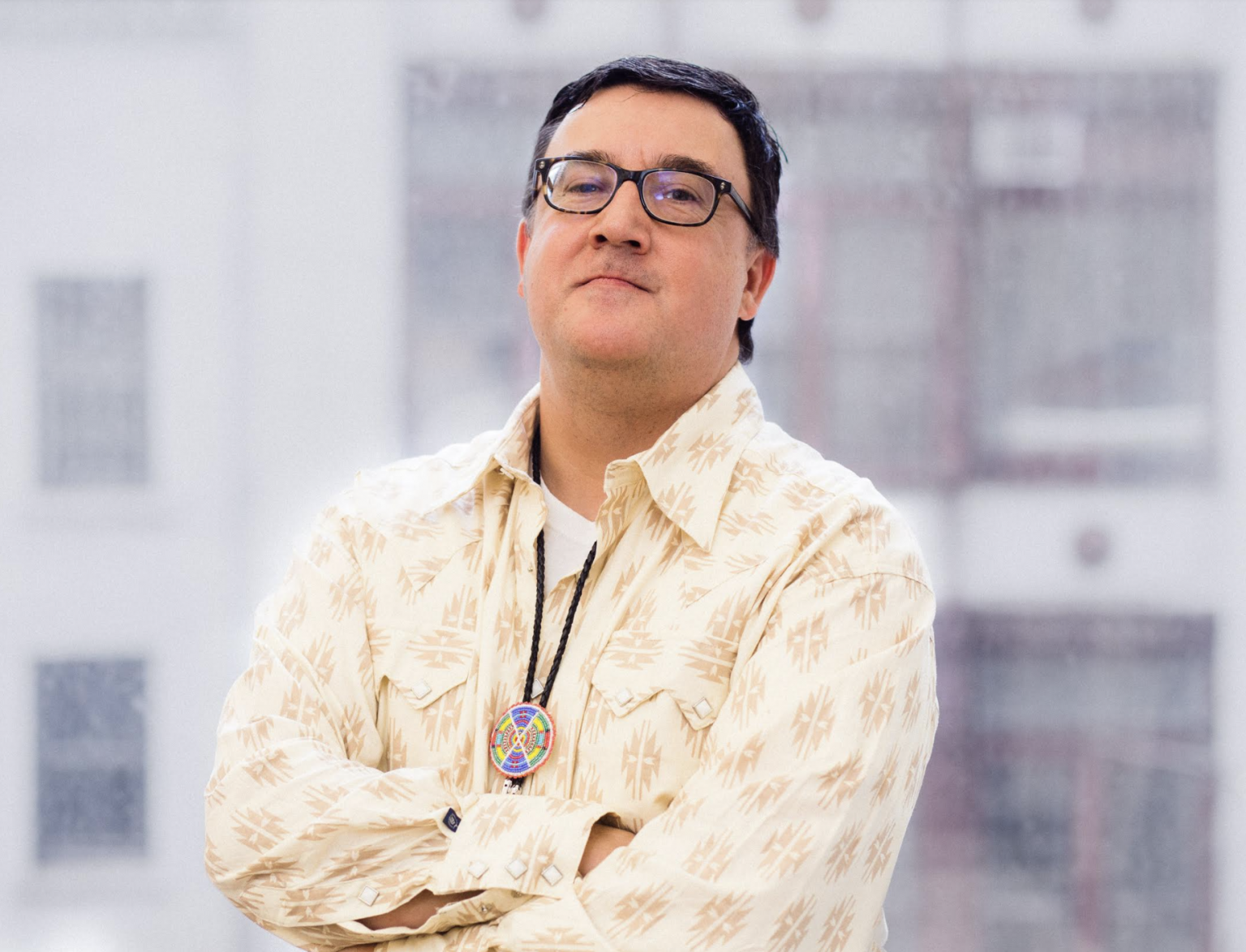 I felt more than a little ridiculous, standing in the middle of the night in a little shed nicknamed The Oracle. The structure resembled an old outhouse, with a tiny A-frame roof and weathered wood shingles on the exterior walls. Inside, there was a picnic basket with a hole cut out on top, as well as offerings left by previous aspirants. I saw empty liquor bottles, slips of paper, ribbons, and dried flowers. I’d been told that a visit to the Oracle was essential if I was at a creative crossroads or seeking guidance on an artistic issue.

Both of those applied to me, as I’d recently finished work on a major project and was considering writing an essay about my grandmother and her time at the notorious Carlisle Industrial Indian School. However, I was deeply conflicted about the piece, as I’d have to reveal some correspondence from her that I’d uncovered—letters that embarrassed me and which I’d kept hidden for years.

Inside the Oracle, I read the directions—smudged and grimy—tacked on the wall:

1. Write your question down (or skip this step and go directly to #4)

2. Insert in top of ball

3. Give the Oracle a second to work on it (use this time to dwell on your dilemma)

4. Retrieve answer out of bottom of ball

Having no pen or paper, I decided to forego writing down my questions and instead speak them aloud. Still feeling foolish, I whispered my first query, about my recently completed novel manuscript: Will my book be published? I waited a moment, then reached inside the picnic basket and pulled out a tiny slip of paper.

It said, the answer to life is always a party.

I felt doubly foolish then and stuck the little message in my pocket. I considered leaving without asking my next question, but decided to finish what I’d started. I stood there for a while, silently composing my request. I glanced around, making sure no one could hear me, and then I mouthed these words: Should I write an essay about my grandmother and her time at the Carlisle boarding school?

I reached again inside the basket and pulled out a little message. I waited a moment before looking at it, then held it up to the light.

I wrote the essay, “Carlisle Longings,” in the early summer of 2018 while I was at the MacDowell Colony in New Hampshire. I was there to finish writing my novel, Winter Counts, a literary thriller set on the Rosebud Reservation in South Dakota. However, shortly after my arrival in New Hampshire, the news about the Trump administration’s forced family separation policy at the southern border began to break. Horrifying images of children in cages appeared in the media, along with allegations of inadequate nutrition and abysmal sanitary conditions. Like so many others, I was shocked and appalled by this news, and it became difficult to work. My mind kept returning to the children—some as young as two or three years old—and how painful it must have been for them to be torn away from their parents, not knowing if they would ever see them again.

Of course, the policy of forced family separations is exactly what American Indians endured during the boarding-school era in the late nineteenth and early twentieth centuries, but I saw few references to that historical abomination in the news or on social media. Scholars estimate that as many as 30 percent of Native children were forcibly removed from their families by government authorities back then. I began thinking about whether I could write something that could illustrate the similarities between the two groups. Indeed, my own grandmother had attended the most infamous of the boarding schools, the Carlisle Indian School in Pennsylvania. However, my most pressing task was to finish the draft of my novel, so I had to defer any plans I might have had to write something on family separations.

Initially, I found the MacDowell Colony a daunting place to work. I’d graduated from my MFA program just weeks before, and MacDowell was the first residency to which I’d ever applied. For the first few days, I was too intimidated to do any real writing, but then I adjusted to the atmosphere and experienced the most astonishingly productive time of my life. I wrote from dawn to dusk, taking a break only for the famous lunches, silently delivered to each resident’s doorstep in a wicker picnic basket.

To my surprise, I was able to complete the draft of my novel manuscript by the end of my third week at MacDowell. I took a break for a day, but then turned to the question of what to work on for the remainder of my time in New Hampshire. I’d continued to think about the possibility of writing about the Native boarding schools and the historical parallels to the forced separation policy, but I’d hesitated, as I knew that an honest essay would require that I mention my grandmother’s apparently positive experience at the Carlisle School.

Years earlier, I’d obtained my grandmother’s records from Carlisle and discovered a letter written by her wherein she declared her fondness for the school. I was ashamed of that missive, as it seemed to show a distressing tendency to accommodate the horrible policies of the institution. I wished her letter had expressed anger and fury against the oppressive conditions of the school, so that I could trumpet her rebellious nature and bask in her warrior spirit. Instead, I had an alumnus note where she praised the school, expressing her longing for the institution and her desire to return there. I’d never told a soul about the letter, choosing instead to keep that awkward truth hidden.

My dilemma, then, was whether I should write the essay, which would necessarily include my grandmother’s appreciation of and affection for the school. That revelation would undermine my contention that both the Native boarding schools and border camps were inhumane and cruel institutions. Of course, I could simply omit my grandmother’s letter from the piece, but I ruled that out as disingenuous.

It was at this point that I made my visit to the Oracle. As much as I’d like to say that the message I received in the tiny structure influenced my decision, that wasn’t the case. Rather, I reflected on the question and decided that I had a duty to be honest to my grandmother and her history, no matter the reaction from others. I threw myself into the essay, researching and writing furiously, as I tried to learn more about her time at the school and the conditions there.

Of course, in the process of writing the essay, I uncovered the larger truth of my grandmother’s time at Carlisle. I learned that she’d been indoctrinated, as had so many others, but that she’d practiced her own forms of quiet resistance and rebellion on her own terms. Rather than an image of her as passive and accommodating, I discovered something far more complicated. I realized that it’s vital for Native people to rely upon collective memories and traditions, rather than to trust written accounts that were shaped by colonialist perspectives. Survivance, resistance, resilience—my grandmother demonstrated all of these, and I hope the essay does justice to her memory and her spirit, as well as to all the Carlisle students.

Sadly, there’s been no satisfactory resolution of the immigrant crisis, and we remain in the time of family separations. The Trump administration ostensibly ended the forced family separation policy by executive order on June 20, 2018. One week later, a federal court ordered the reunification of separated families with children under age five within fourteen days, and families with children older than age five within thirty days. Although a number of families were reunified, federal authorities have reportedly used several exceptions to the executive order to justify the continued separation of immigrant families. Most commonly, the allegation that a parent had a criminal gang affiliation or that the parent poses a danger to the child is used to warrant the continued detention and separation of these families. As of this writing, there are still hundreds of immigrant children—and perhaps many more—who are still separated from their parents. The agony of these families continues, a sad echo of the pain Natives felt for so many generations.

David Heska Wanbli Weiden, an enrolled member of the Sicangu Lakota nation, is the author of the novel Winter Counts (Ecco/HarperCollins, forthcoming 2020) and the children’s book Spotted Tail (Reycraft, 2019). His work appears in the Yellow Medicine Review, Transmotion, the Criminal Class Review, and other magazines. He’s the recipient of a MacDowell Colony Fellowship, a Ragdale Foundation residency, the PEN America Writing for Justice Fellowship, and was a Tin House Scholar. He received his MFA from the Institute of American Indian Arts and his PhD from the University of Texas at Austin. He’s associate professor of Native American studies at Metropolitan State University of Denver and lives in Colorado with his family. You can find him on Twitter @WanbliWeiden.