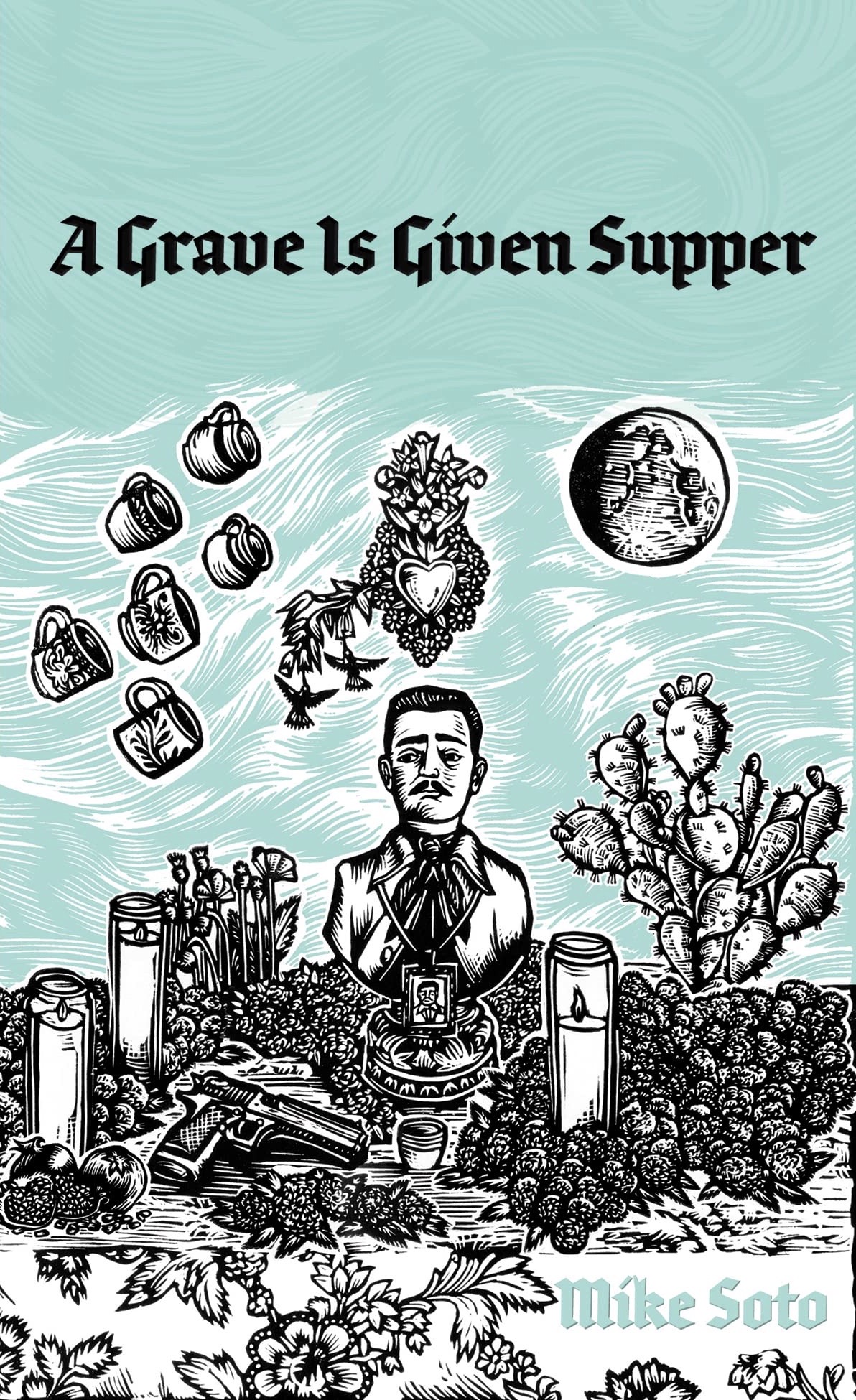 Poet Mike Soto’s new collection is out this month, and we asked him to tell us its origin story and about its fantastic cover, among other things. Mike’s poems, “[Her eyes were a rifle & I was standing]” and “The Next Life” in our Fall 2019 issue.

I vaguely started working on AGIGS in earnest circa 2012, with only the idea that I wanted to respond in some way to the increasingly sinister culture of violence that had taken shape in Mexico, & that I wanted what I wrote to be a journey of consciousness despite these conditions—those were really the only parameters I set for myself. I worked on the poems whenever I could while trying to eke out a living in New York, & after some years passed the manuscript came to a crossroads—I had one protagonist, Consuelo, & another unnamed protagonist, & very little narrative structure to propel the work forward—then I was nudged toward Alejandro Jodorowsky’s El Topo. The imagery of the film mirrored the poems I was trying to write—surreal but visceral. I felt a deep corroboration with it. It gave me permission to trespass, in a sense, & take the work where it needed to go. Pretty soon I was writing the book as a kind of Acid Western set in the context of the drug war, my unnamed protagonist had a name, Topito, & the shape of the book came alive.

“Topito’s Poise” can be said to represent the collection & be a current favorite, maybe because it’s one the last poems I finished. This poem encapsulates the main protagonist’s journey in the late stages of the book. At this point he’s gained some mastery over his spiritual self, & the journey outward has become one & the same with the journey inward, & he’s able to come home to himself, in a sense. The past, present, & future converge, & as he moves forward a flash of memories are summoned by his arrival:

To mute the blood, enter the room

with the neon labyrinth, to lay

my weapon down by its entrance,

as a string of silver memories

gets brighter in my mind:

my grandfather braiding a sling,

into a bowl of milk & the cats

coming out of nowhere…

I’m curious about some logistics of the book: the title, its organization, the amazing cover art.

The title came from a line in a poem I once wrote in Tom Lux’s workshop. I challenged myself to write a poem with short, one-sentence stanzas, each attempting to frame an image, or to frame a moment. One of those one-sentence stanzas was simply: “In the cemetery, a grave is given supper.”

I ordered the poems based on my own cinematic feel for the manuscript. Though a lot of the narrative that the poems tell is chronological, I knew I wanted to begin the book in the middle with a mistake that would set the story (& back story) in motion—a pivotal moment that would be explained by the book itself. In this case, the book starts off with Consuelo, one of the protagonists, finding herself inside a chapel whose walls have been vandalized. The last poem is a showdown because the book is, after all, a type of Western.

The cover art & interlude art I owe to Daniel Gonzalez, a printmaker from Los Angeles. I did a graphic sketch of what I wanted for the cover & the art that would break up the poems into sections. I’ve loved Daniel’s work for years, & decided to pitch the project to him, thinking he could take my sketch to a completely different level. When he said yes, I was ecstatic. I can’’t think of anyone better to interpret the vision of the book.

I spent several years sending the manuscript to contests, & in the meanwhile met Will Evans, founder of Deep Vellum, which was publishing amazing work in translation out of Dallas, my hometown. As more time passed, I had a growing inclination to pitch the manuscript to Deep Vellum as a book in the realm of translation, as many of the poems were first written in Spanish & have a foot on both sides of the U.S./Mexico border, in a sense. To my surprise, Deep Vellum was already thinking about expanding toward publishing original works in English. So, I would say the process of finding the right publisher was a convergence of ideas & timing, being in the right place & the cultivation of some luck.

What’s it been like to release a book during a pandemic? I’m sure that’s been challenging in a lot of ways.

It’s been very challenging to have cause for celebration—writing this book was a huge undertaking—& then to not be able to release that energy. Or, to not even feel like celebrating because of the impact the pandemic has had on so many lives. But it’s been important to remind myself that the work is in reality & in our imaginations. Both need to be nourished & sometimes one more than the other. I think this is obviously a time for our actions to take the lead & for our imaginations to follow, inform, & elevate our work toward issues like health care, racial inequity, & immigration reform, all which the pandemic has painfully exposed. But the imagination remains crucial. If anything, now is the time to sharpen it.

Despite the state of things, I do think this is an opportunity for writers to redefine & amplify their writing practice in ways they wouldn’t imagine otherwise. Especially with poetry, since the attention poems call for usually tends toward a non-linear, more associative type of attention, expanding the text, say, with images & sound, could add another dimension to it, & draw a reader’s attention toward the published work from a different place.

What are you excited about related to the book? Anything special you’re working on now or next?

I’m very excited about the possibilities of AGIGS being interpreted in other spaces. There are currently plans for a theatrical adaptation, for example. When the time comes, I would love to do some performance-based readings specific to the book myself.

Right now, I am working on a collaborative book with text & photographs by Diego Enrique Flores, a long-term collaborator. It will be an exploration of memory, identity, & origins, documenting a ten-year span traveling between Texas, Mexico, & New York. An illuminated text by way of photographs.

Mike Soto’s debut book-length work of poetry, A Grave is Given Supper, will be published by Deep Vellum Books in summer 2020.