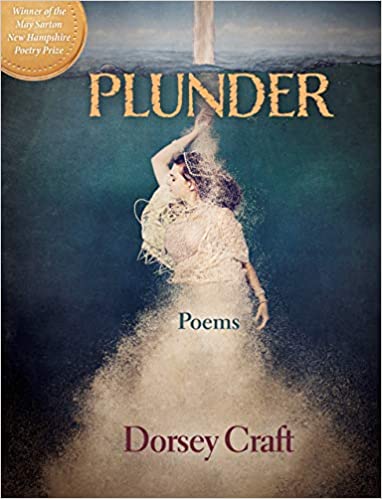 We’re excited about Dorsey Craft’s new poetry collection, Plunder, which won the 2019 May Sarton New Hampshire Poetry Prize. She answered a few questions for us about the book, available here. “The Pirate Anne Bonny Does Not Care About Football” is in our Spring 2020 issue.

Can you tell us the story of this book: When did you start working on it? What were some of your preoccupations as you were writing it? How did you know when you had a complete collection on your hands?

I started working on Plunder while eating a chocolate croissant. I was in between my MFA and PhD programs and casting around for subject matter that didn’t feel tired or ripped-off from my MFA thesis, and this particular morning I wrote three lyric poems about Anne Bonny and ended up really excited about the idea of a series. Ocean imagery and femininity/gender were always at the forefront of my poems and I felt like I had finally found a way to marry them together in the figure of this mythical female pirate. There were several times that I was sure I had finished the collection, but the version I had in the summer of 2019 felt especially good because it had a really precise balance between Anne Bonny poems and poems from a modern-day speaker.

One poem that feels central to me is a longer poem called “Memos for My Mother.” We once found this memo pad in my grandmother’s house that had a bulldog printed on it, and my mother had written stories about the bulldog thinking that his name was “Memos.” They were hilarious and witty and had such a voice, and I loved reading them because they made me think of my mother as a writer for the first time. The poem quotes Cixous’s The Newly Born Woman, where she says “To write is always to make allowances for superabundance and uselessness.” The Anne Bonny poems provide space for this superabundance and uselessness within the collection, but the speaker is always tentative about it. “Memos for My Mother” reflects that tension between excess and stillness: it’s a long poem, but each section is a tight little sonnet. I also treasure it because it features several dogs and because it’s my mother’s favorite poem in the collection.

We’re curious about some logistics: How did you come up with the title? How about the ordering of the book—its organization, or choosing the first poem or the last poem?

My friend Eleanor Boudreau and I were trying to study, but we ended up discussing our favorite recent titles for poetry collections. All my favorites had only one word. Eleanor plugged in “pirate” into an online thesaurus, “plunder” came up and we both felt immediately that it was perfect. I wrote the first poem of the book, “The Pirate Anne Bonny Says She’s Not the Madwoman in the Attic,” last, probably only a week or so before I sent it to the May Sarton Prize. It’s a key poem for the reader’s understanding of the relationship between the two voices of the book—the pirate Anne Bonny and a more contemporary female speaker. Eleanor (to whom I owe quite a bit) had always been a champion of the interplay between the two voices and always resisted me when I wanted to put them in sections of their own. I finally laid out piles of Anne Bonny poems and speaker poems and then went back and forth between them to create the final draft of the manuscript.

It required a lot of faith and patience, which are not my strong suits. I sent out to contests and open reading periods very aggressively for two and a half years. I know I’m very lucky to have found a publisher at all in that amount of time, but to me it felt like forever. Bauhan has been lovely to work with and I’m incredibly grateful that I found the May Sarton Prize last year just before the deadline.

What’s it been like to release a book during a pandemic? I’m sure that’s been challenging in a lot of ways. Anything surprising about the way you’ve been able to connect with readers? Any advice for other people about to publish their books?

The pandemic has certainly caused me to rethink the book release in a lot of ways. There was going to be a pirate-themed book party, a whole swath of readings with friends. Outfits had been planned. Now it’s almost all moved to social media, which is a mechanism I’m still trying to fully grasp. Still, I’ve given a couple of online readings and had some cool opportunities to promote the book and I appreciate the support that the poetry community showered on writers with books coming out in the spring. Rosebud Ben-Oni’s crowdsourced list over at Kenyon Review was unbelievably generous and thoughtful, as was Frontier’s Digital Book Tour.

What are you excited about related to the book or your own work? Anything special you’re working on now or next?

I am so, so happy to finally be at work on a second project. It is genuinely thrilling to sit down in the morning and not know what I’m going to be writing about. I’ve written love poems and elegies and prose poems. I’m working on a series of sonnets about football as well as some poems about mourning doves. Like many people, I’ve been spending an inordinate amount of time with my partner so he has gotten a whole mess of love poems as a thank-you for putting up with me.

Dorsey Craft’s debut collection, Plunder (Bauhan 2020), won the May Sarton New Hampshire Poetry Prize. She is also the author of a chapbook, The Pirate Anne Bonny Dances the Tarantella (CutBank 2020). Her work appears or is forthcoming in Colorado Review, the Massachusetts Review, Poetry Daily, Southern Indiana Review, Thrush Poetry Journal, and elsewhere. She is currently a PhD candidate in poetry at FSU and a poetry editor at Southeast Review.