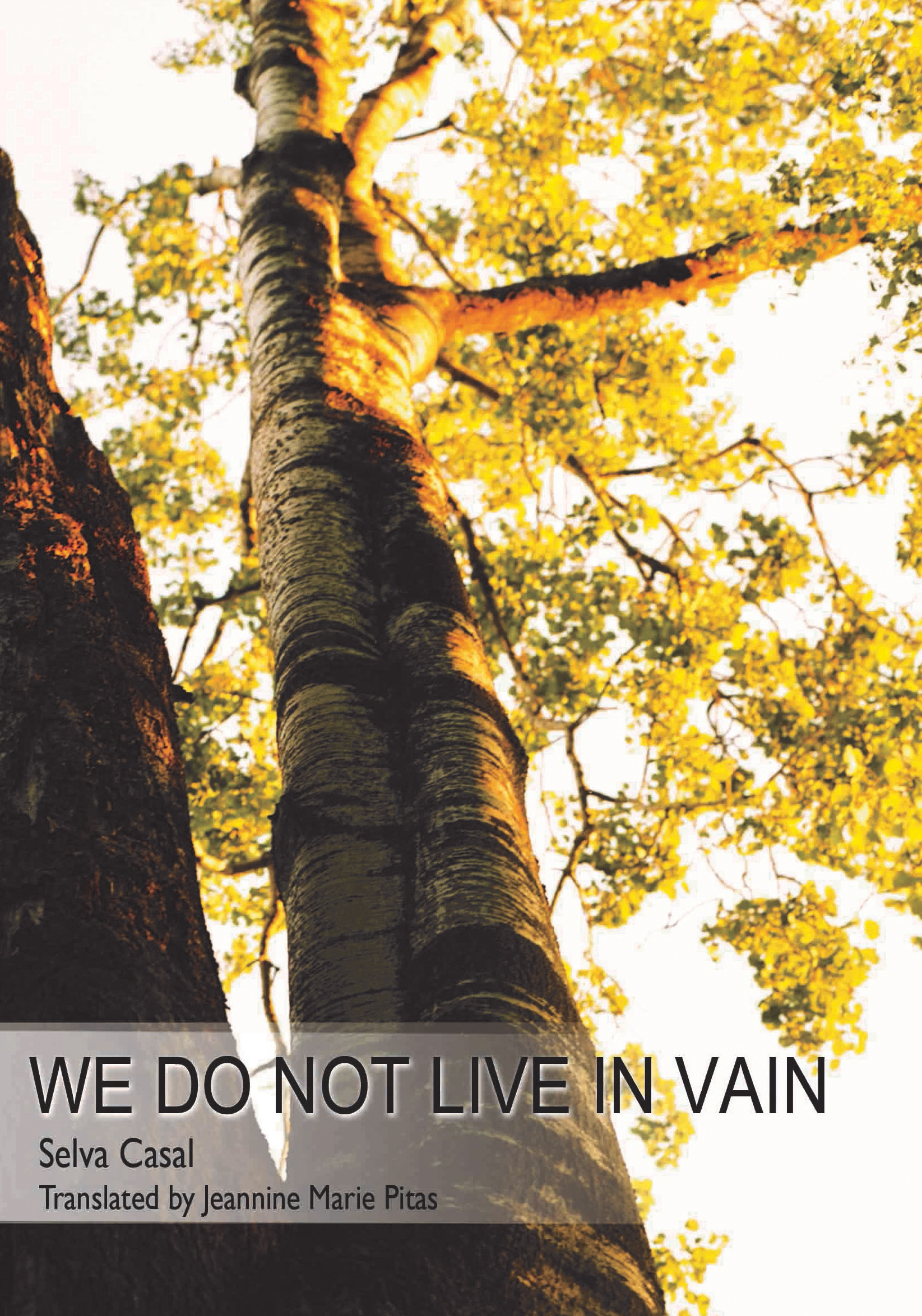 Selva Casal’s new book We Do Not Live In Vain, translated by Jeannine Pitas, was recently published by Veliz Books. We asked Jeannine to share her favorite poem from Selva’s collection and to speak about the book’s powerful backstory and the unique process of publishing during a pandemic. Selva’s poem, translated by Jeannine, “No me alcanzan los brazos de la tierra” appears in Volume 68, Number 1.

Selva Casal began writing at a young age (her father was also a poet). No vivimos en vano, published in 1975 when the poet was forty-five years old, was her sixth book. At that time Casal was a married mother of four, a successful criminal lawyer, a sociology professor, and a poet known throughout Uruguay and beyond. This small book—just forty-five pages in its original version—was published in the middle of the U.S.-backed dictatorship that ruled Uruguay from 1973 through 1985. Subtly (and at times not so subtly) critical of the regime, the book was a risk and a danger for Casal. This was a time when thousands of people were being illegally kidnapped, tortured, and murdered by the government. Casal showed tremendous courage in publishing these poems, and she did pay a price: she was removed from her academic position at Uruguay’s main university.

I first met Casal in 2013 while on a research trip to Uruguay. For many years I had been studying and translating another Uruguayan poet, Marosa di Giorgio (1932–2004) who was a close friend of Casal. Di Giorgio’s family members told me that Casal wanted to give me some of her books. I met her and her husband in their home, and I was struck by her kindness and her delightful sense of humor—which posed a lovely contrast to the intensity of her poetry, which reveals a deep awareness of human beings’ most unsavory characteristics. I fell in love with both the poetry and Casal herself, and I have since translated poems from various books of hers. But I decided to work on No vivimos en vano first because of its historical and political significance. After the 2016 U.S. presidential election, the book came to seem more and more relevant to the moment we are living now in this country and the world. I am honored to see this book published in this year 2020.

Is there a poem you feel is a good representative of the collection as a whole?

For me, the most representative of the poems is this one, which you can quote in full if you like! The title is “Ya no hay mar” (“There’s No Sea Anymore”).

Ya no hay mar

ya no hay mar

you come back from the wave and move forward

the bullet hisses it hisses

on the golden foam

today an absurd man is growing

he has neither sea nor house

violent to the point of delirium

that grabs you by the feet, snatches you

climbs up your feet

lays you out naked and alone

over a landscape of lies

they put on statisticians’ voices

and speak of a democratic system.

I’m curious about some logistics: How was the title chosen? How about the cover art?

I believe Casal sees the title as a statement of hope. Any stories I’ve ever heard about living under a dictatorship or other form of oppression suggest that in those conditions it is hard to find meaning and purpose in life, to trust that our lives are not in vain. I see the title of this collection as an act of faith on the part of Casal. To me it is incredibly inspiring.

For the cover art, I chose an image of a large tree in a place that I love. Big trees, for me, represent fortitude, endurance, and faith. They are reminders that whatever difficulties we are living through will not last forever. They are signs of strength and hope.

I was very fortunate to encounter Veliz Books, a small press that specializes in translations from Spanish, Portuguese, and Galician as well as poetry, fiction, and creative nonfiction in English. The editor, Laura Cesarco Eglin, was an acquaintance who attended a session of the American Literary Translators’ Association where I gave a presentation on Casal two years ago. Cesarco Eglin is herself from Uruguay and is committed to promoting underrepresented voices from Spain, Latin America, and beyond. I asked her if she would be willing to consider the manuscript, and she said yes. A few months later she told me she had accepted it. Since then, while working on this project and participating in some events together (before COVID-19), we have become good friends. I greatly admire Laura, who is a multilingual poet and translator, for making a home for herself in this adopted country and contributing so much to it. We greatly need more presses that focus on translation; in cofounding Veliz Books five years ago, Laura has offered this country a tremendous gift.

What’s it been like to release a book during a pandemic? Any advice for other people about to publish their books?

It is extremely difficult to sell poetry books without live, in-person events. I published my own first book of poetry, Things Seen and Unseen, with the Canadian publisher Mosaic Press in 2019, and the in-person events I held that summer and fall were the main way I sold books. Admittedly, I myself was never one to buy books (or anything) online prior to COVID-19. Since that time, I’ve started buying friends’ and acquaintances’ books to support them and the presses that publish them. So, to anyone publishing a book in 2020 or 2021, the first thing I would urge you to do is to purchase books by other writers you admire, particularly ones published by small presses. In times of crisis, we need to support one another. The second thing I would say is to be patient and persistent in promoting your work, and to remember that there are ways to share your writing with the world beyond book sales and live events. When the book was published, Veliz hosted a Zoom event, and while I think we’re all suffering some Zoom fatigue, I was grateful to have the chance to bring together a variety of people from different countries, including many in Uruguay. While online platforms are no replacement for live events, they do allow us to connect in new ways across distance and share our work with people who might not encounter it otherwise.

What are you excited about related to the book or your own (or Selva’s) work?

My biggest excitement is to see the translation being published in bilingual form now, in the historic moment the U.S. is living through. Casal wrote this book in the context of Uruguay in the 1970’s. The translation has been published in the middle of a global pandemic, a new anti-racism movement, an ecological crisis, and political division within the U.S. However, despite all of the strife, there are people striving to maintain hope and show care for others—whether sewing personal protective equipment for those most in need or reckoning with ingrained realities of racism. Though a small gesture, I really see the publication of Casal’s book in English as part of the struggle for justice in the world. Casal herself is ninety years old and not in the best of health at the moment; the only way I can connect with her is through her daughter. For me, it was extremely important to publish this translation during her lifetime, to let her know that her courageous example has inspired me. In translating this book, I hope it will inspire others as well.

Jeannine M. Pitas is a writer, teacher, and Spanish-English translator living in Iowa, where she teaches at the University of Dubuque. Her translation of four books by Marosa di Giorgio, published as I Remember Nightfall by Ugly Duckling Presse, was shortlisted for the 2018 National Translation Award. Her most recent poetry chapbook, Thank You For Dreaming, was published by Lummox Press in 2018.