Artist Xavier Tavera, whose photograph appears on the landing page for our Fall 2019 issue, had a conversation with poet Mike Soto, whose work also appears in the issue. The two shared their work over email and discussed the purpose of art, the nature of time, and memory’s relationship to truth. Here is a transcript of their conversation. 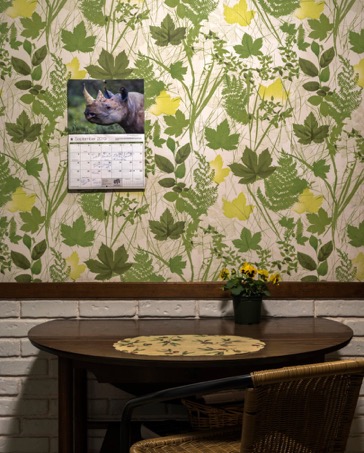 Mike: This image to me speaks about the domestication of the wild. The wall is foliage, but not actual foliage. The rhino is reduced to an image on a calendar, of domesticated time, and the table implies that even further, with the wicker chair, nature-patterned tablemat, and the potted flower. This makes me think of our tendency to appreciate nature from a distance and not from actual experience, which seems like a chasm that has widened from our consciousness. To truly love and immerse in nature, one must feel the discomfort, one must lose one’s domesticity and safety. That seems to be the constant lesson. This photo is an elegy. 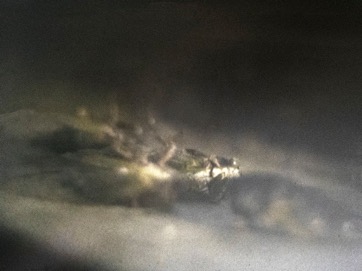 Mike: I feel like I’m inside the living sphere of a cicada in this image, or brought to its level of perception. I even imagine this being an attempt to look out from another cicada’s perspective—a cicada’s view of death? Either that, or it implies a scientific approach, one that begs dissection. A cicada on a dissecting table. But the nebulous quality of the image implies the table appears in a dream state.

Xavier: When you write, do you see in your mind images of spaces, people, and objects? How about time? Do you consider specific time in your writing?

Mike: Writing my current manuscript, I’ve definitely visualized a specific glossary of images relating to the drug war in Mexico from 2008 to 2012, to themes gleaned from El Topo, Alejandro Jodorowksy’s film which the manuscript is partly based on—and almost without fail, a memory that grounds the emotional/subconscious experience of what I’m writing.

In terms of time, I deliberately try to step into a depth of time, seek it out in words either directly, or in a cohesive way. I think I made a choice early on that writing about contemporary issues would never get me at the heart of the matter, unless it was through a process of extraction where I would render the contemporary issue into the context of a poem to recondition it and try to get at the emotional truth, or the subconscious truth. I know I’ve stepped into the time that I seek when I feel the words on the page will stay with me (with the reader) and remain alive as a possible memory in the future.

Mike: I wonder if these four legs are an attempt to compose a table, but they do not imply a table for me so much as they imply their own singularity, their individual character. Each leg seems to stand on its own in a unique manner, but they are obviously part of the same implied table? The more I look at these images the more I notice how each leg is imperfect, how each one falls short of the form. And the more I continue looking at them, I start to think that they are each actually very different, as if made with rudimentary materials and by hand. This makes each leg feel like an attempt (with limited tools) to carve all the legs from the same model (not pictured), or possibly from memory.

How do you end up choosing the subject of a photograph? Do you think about a subject and then find an object(s) that will symbolize that subject? Or do you immerse yourself in the process of taking photos and then later assess which images are worth thinking more about?

Xavier: It all starts with a particular idea, a concept, a desire, or simple curiosity. The need to access a space, a person, or a situation turns into a strong feeling of wanting to learn about the subject, and then it turns into a tentative plan to access the subject. Once the admittance is granted, there is a lot of improvisation and reaction to each individual situation. For me the rationale and purpose to photograph is to have encounters, to have the experience to meet someone or something. The byproduct is a photograph, but the encounter is the main reason to photograph. 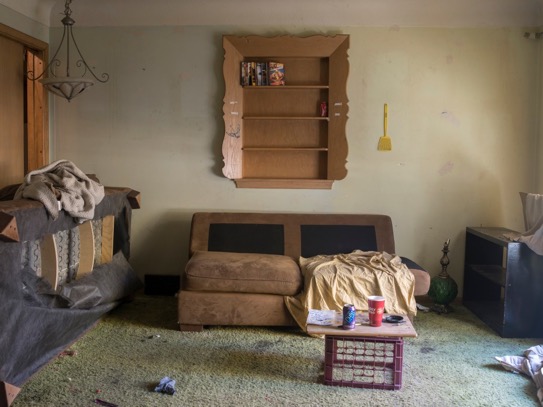 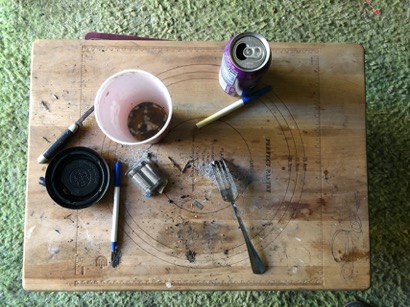 Mike: I think what immediately stands out about these images is the intimacy coupled with the darkness/bleakness of them. Or, the feeling that this is a place where someone has slept, been comfortable, experienced euphoria and perhaps the hell of withdrawal. It resembles what would be a normal intimate space for most of us—a blanket, a couch, a small collection of movies, but it isn’t. There are stains. The space is stained beyond salvation, one could say. Most of us would think to destroy it in order to transform it into a newly hospitable form, but the bed sheet on the couch suggests at least a modicum of comfort. The flyswatter on the wall is absurd. But still it persists in this scene out of sheer necessity, it seems. I imagine someone getting high, and the only thing disturbing his/her euphoria (or sleep) would be the buzzing of a fly. This room provokes discomfort and queasiness, maybe even nausea. But the flyswatter tells us that there was also an attempt to be comfortable, or an attempt to have a pleasant experience. Whoever inhabited it may have even thought of this space as sacred, or at least a haven. And it seems vulgar that this is possible, that this space could somehow be sacred or a haven, but also redemptive. A human darkness is present even if a human body is not.

The detail of the improvised table—one thinks that at some point the coincidence of it being a pastry board, for “the perfect pastry,” had to become part of the language of preparing the drug. Did it become a joke? Did it become a metaphor for the process? The preciseness of the concentric circles, being centered, focused on the task of someone fixing a high, focused on that need, that desire. The perfection of technique. Even if the person who inhabited this room was completely oblivious, I feel like this aspect is laid bare. This photo captures a process, the stain it leaves. In many ways it resembles a shot of the workspace of an artist’s studio. But this is more personal. The depths painfully real.

These are incredible images to have captured. But I felt annoyed with myself when I started assessing them like any framed work of art. Not knowing the context, I would say these photos convey a singular feeling—the space of a feeling. Something akin to the dark night of the soul, but with all romantic aspects obliterated. Art was not the intention of whoever was here—maybe that’s why it can resonate so much like/as art? The worst art is self-conscious art, and maybe at the other end of the spectrum is a slice of real life. It would be interesting to get your thoughts on this.

Could you tell the who, what, when, where, why, of these images? I’m very intrigued to know some of the truth.

Xavier: These images were taken inside the living room of an extended family member that recently passed away. This uncle lived an adventurous and perilous life. He was known to water ski barefoot. Even at an older age his eccentricities took him to burlesque and underground scenes dressed in a tuxedo and equipped with a BHS camera where he documented dancers and regular bar customers. I believe that later in his life he became nostalgic for his younger years when he was more extreme. This sentimentality drove him to embrace a number of people into his home that carried a high sense of risk and questionable living conditions. The images are a peek into the illicit attitudes and clandestine approaches to life motivated by my attempt to understand him a little better.

You mention truth in your question. Truth is something that photography brags about but is never fulfilled. It tries very hard to apprehend realities so we buy into the falsehood of the image as a statement of truth. Photography defies everything we think we know. More than truth photography is a resource for memories and most times those memories change with time.

Mike: I agree, the truth seems to be only the framework of a memory, if it’s our memory. And something completely different if we don’t have any personal attachment to it. I like thinking of photography as a mnemonic device, same as writing can be, a way to remember, not accurately, but as a place to remember and come back to things that have happened so we can continually make sense, or make new sense, of them. However, I think of how photography uses the facts of the matter in a unique way. All of the elements pictured happened—that was a real couch, a real table, and a real person inhabited that space. Maybe that’s a better word than truth—fact. Plausibility seems to never come into question with photography, but as writer I’m always concerned that things are grounded in a logic that can stand up in some way to reality.

I wanted to ask you about your images that have a table superimposed on them. It is not an actual table, but a schematic plan for a hypothetical table. This is imposed within a landscape on the border, seemingly where an extension of the border wall between the U.S. and Mexico would be built. Can you say something about this process and what the table in these photos means to you given the current political climate surrounding immigration and the border? 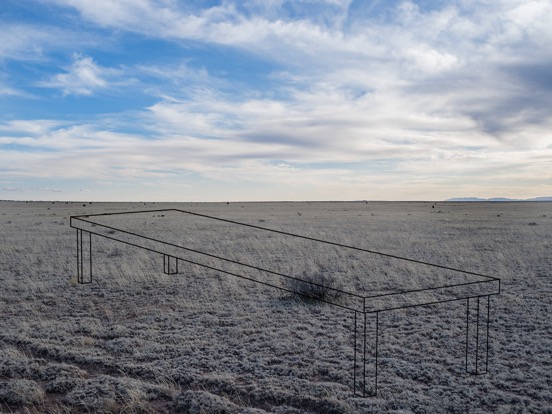 Xavier: The superimposed table on a border landscape is an imaginary blueprint about an imaginary border. I was trying to imagine an elongated table instead of a border fence. What would we do if we encounter a table instead of a wall? Would we have a meal with somebody across the table? I try to imagine the conversations people would have along that table. Sometimes I imagine the possibility of a more humane future where we can converse with one another even with people that we don’t agree. What a senseless concept…

After moving from Mexico City to the United States, photographer Xavier Tavera experienced a sense of cultural alienation that compelled him to document the spaces, places, events, people, and artifacts of those living in marginalized communities. Tavera’s images offer insight into the diversity of numerous subcultures, giving a voice to those who are often invisible. This exhibition focuses on the notion of borderlands as Tavera explores the echoes of cultural clashes at the United States/Mexican border that reverberate through other Latina/o/x geographies. Tavera has shown his work extensively nationally and internationally including in Germany, Scotland, Mexico, Chile, Uruguay, and China. He lives and works in Minneapolis, where he teaches at the University of Minnesota.