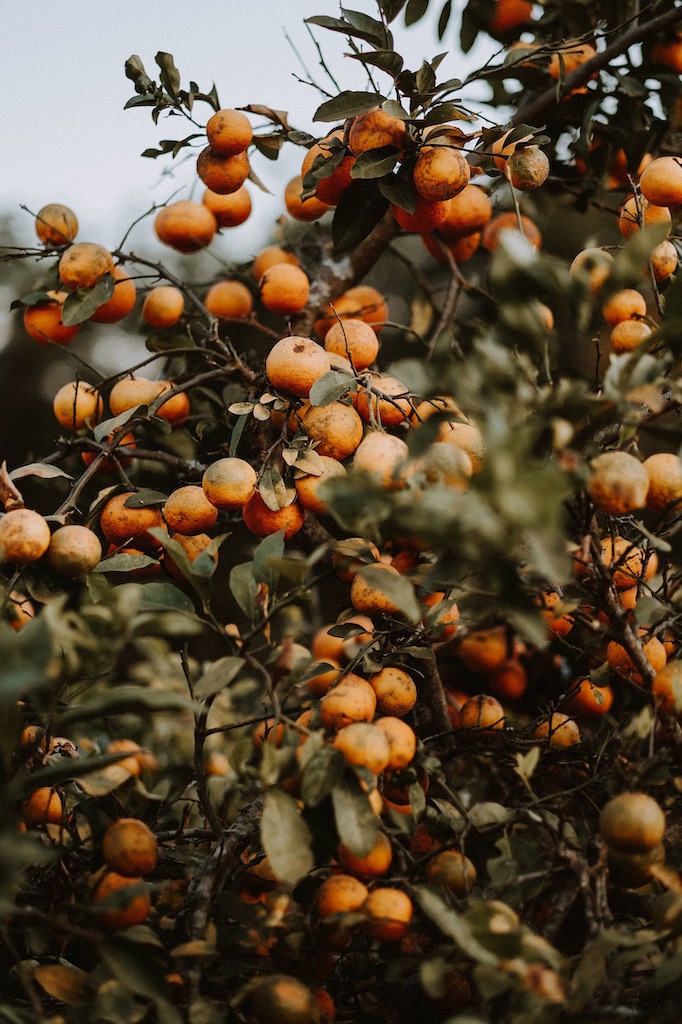 Ann Fisher-Wirth reflects on dying and the afterward. She talks about her late sister, Jennifer, and shares the origin of her poem “Persimmons” (published in Issue 70.2) in which she and Jennifer meet in “that place beyond identity.”

We never gathered the Japanese persimmons

ripening in the upper branches those long autumns

my mother and I lived alone. She liked

their red-orange opulence against the sky.

For my nineteenth birthday you joined us

at Norman’s. The walls were hung with surreal nudes.

We spooned our cream of chervil soup, the same

pale green as that bare haunch above her head.

That night she came to my room: I think you’re sleeping

with him. The way you two looked at those pictures. . .

I’m not, I protested. I couldn’t bring myself

to say, I want to but you told me not to.

When you came by the next evening, under the tree

you stooped in the wet leaves and raised me

on your shoulders. We were so young. The persimmons

hung just out of reach. Tightening my thighs

around your neck, I strained up and loosened

the smooth fruit. One by one they dropped into my hand—

This is a poem my sister wrote long ago about something that had happened still earlier, in 1967; it is a love poem for the man who became her husband. She published the poem, and I read it at the time, but she pretty much stopped writing poetry not long thereafter. It captures that time so well—my mother’s kind but strait-laced anxiety, my sister’s dutifulness, the passion growing between a young man and woman who would be in love with each other for the next fifty-plus years.

My poem “Persimmons” is haunted by this poem just as my life is haunted by my sister. In April 2019, as my husband and I were en route to Greenwood, Mississippi, for a poetry event, my phone rang, and in a tiny voice, my sister said, “It’s cancer.” She had had some bleeding, which seemed not to be a problem, but when it happened again, her doctor did further tests and discovered she had a Stage 4, rare, fast-growing uterine cancer. An immediate hysterectomy revealed that it had seeded throughout her abdomen. She began radiation and chemo under the supervision of a brilliant gynecological oncologist, then more chemo, then a more brutal chemo, but each time it failed to stop the progress of the disease. Finally, her oncologist did tests to see if there was any drug that would match her DNA. But there was none.

My sister and her husband Bruce lived outside St. Louis, and my husband and I live in Oxford, Mississippi, so I couldn’t see her every day. We drove up in May, they drove down between chemo bouts in July, and I went up in September. In May, she took the jewelry she had made out of their gauzy bags, laid it on her bedspread, and let me choose four stone and bead necklaces and a handful of delicate bead bracelets. In July, she and I lay on my bed, and I wrapped my arms around her. She said, “I’m afraid.” And she—ever the lover of medieval literature—told me that “health” and “whole” have the same derivation, from the Old English hal. She said, “It’s not that I want to be well; I want to be whole.” We went to Magnolia Grove Monastery, opened by Thich Nhat Hanh outside Batesville, Mississippi, and walked among the shrines and trees. Everywhere, my sister was greeted with love by the nuns who, like her, had shaved their heads. In September, she slept most of the time. I stroked her feet. Her husband and I coaxed her to eat even a few bites of chicken noodle soup, half a pot gummy. The night before I left, we sat on their little white couch, my arm around her, and watched an episode of The Great British Baking Show. I took pictures of every room in their house, of her asleep, of her with Bruce—everything I could think of, to hold on to this time so desperately fleeting. As I bent to kiss her goodbye, she said, “Every time…every time…” and I knew it gave her joy to see me, to be my sister. Then she said, “One time will be the last time.”

One week later, on October 1, 2019, she died. She is buried at Bellefontaine Cemetery in St. Louis; by chance, her grave is near persimmon trees.

Yoga nidra is a form of yoga which may be characterized as waking sleep; it involves nothing more arduous than lying on your back with your eyes closed and following a guided meditation, which ends with some time in Savasana, then the blessing of peace—Shantih—and finally the phrase that ends all yoga classes, Namaste. Yoga nidra helps to alleviate stress and anxiety, which are so prevalent among us these days—but I have found it to be even more powerful, too. On September 29, two days before Jennifer’s death, I took a yoga nidra class at Southern Star, the yoga studio where I have long taught in Oxford, Mississippi, that a friend was offering, and as I lay there at the beginning, I couldn’t stop sobbing, trying to be quiet, but completely devastated. Eventually, I passed out—that’s the only way I can say it—I entered a darkness deeper than sleep. And when at last I regained consciousness, I knew that I had found her, found my sister in that darkness, that place beyond identity, where though we do not know it, we are one. That was the only place I could find her any longer, but it was there, beneath all things, and while I am still part of time, that knowledge inexpressibly comforts me.

Then, a month after Jennifer’s death, I had the dream my poem “Persimmons” speaks of, when my sister came and walked with me.

Ann Fisher-Wirth’s sixth book of poems is The Bones of Winter Birds. Mississippi, her fifth, is a poetry/photography collaboration with Maude Schuyler Clay. With Laura-Gray Street, Ann coedited The Ecopoetry Anthology. A senior fellow of Black Earth Institute, she was 2017 poet-in-residence at Randolph College, and has had numerous residencies as well as Fulbrights to Switzerland and Sweden. A professor of English, she directs the environmental studies program at the University of Mississippi.