Fiction writer Brenda Peynado untangles the connections between self-discovery, faithfulness, and her novel as it falls into place. 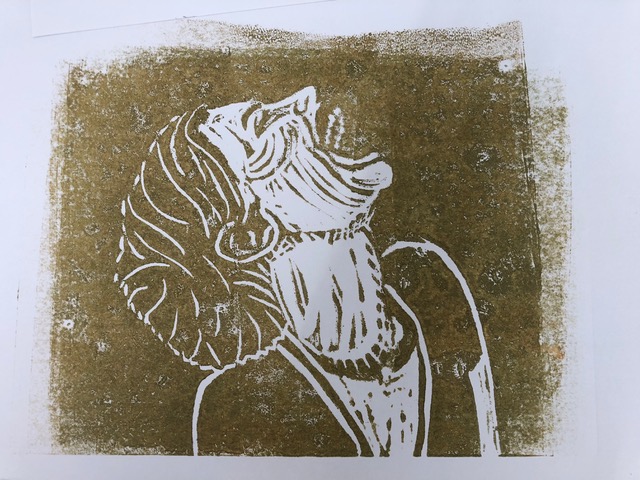 When I first started The Furious Branches, the novel excerpted in Shenandoah, it was a realist story that started on the day Americans invaded the Dominican Republic to quell a civil war in 1965, helicopters blackening the sky. I was trying to stick to facts, trying to stick to the stories relatives had told me about what they remembered. A grandmother snuck gasoline over to the rebels. A great aunt hid guns underneath a crib; holding the baby while Americans searched her house, she pinched him so he’d cry and the soldiers would leave. My great grandfather, Puerto Rican, hosted American officers at Sunday dinners. Someone else was a pilot in the Dominican Air Force. Someone else had American Marines bivouacking in her yard. And because the civil war happened fifty years ago, everyone had processed their involvement, adapting it to their own stories. Every time I interviewed someone for the historical research, the story would be pulled in another direction: their direction. “I know what your novel should be about,” was a common refrain. As a result, the core story and its characters changed over and over again. The heart of my story was a family, I thought, but who they were and what they represented shifted daily. I had a plot, but I hadn’t yet found my story. After doing a year’s worth of research in the Dominican Republic, after having read countless historical accounts, after having much of a first draft finished, I pitched the novel to Leah Stewart, a wizard at novel structure who taught the novel workshop in my PhD program. “It’s all a little inchoate, isn’t it?” she said honestly.

I was trying so hard to be truthful to the history, to the characters I met, and I was so concerned with trying to understand what their compulsions would have been at the time, that my novel was a crowd of people demanding to be listened to, the story yanked in a hundred directions, a chaos of chapters. It had seemed like a good thing, a kind of faithfulness. Yet I could feel the ground shifting under my feet every time I wrote.

It wasn’t until Leah gave us all a tip in workshop that I understood how to tackle the novel anew. Her advice was something like, “It’s easier when your main character or narrator is in the same position as yourself. Not in terms of the superficial parts, like a twenty-something living in Cincinnati, but in terms of your obsession. What obsesses you about this story? What drew you to it? Why is this the story you need to tell, that you’ll spend half a decade or more on? And once you figure that out, give your narrator the same obsession. There’s nothing harder than trying to wrangle a narrator who is constantly looking away from what you’re interested in.” That was the beginning of everything falling into place for me.

I think the hardest part about writing a novel isn’t the writing itself, it’s the process of self-discovery. It was doing deep soul-searching to figure out what was up with me, the writer; what my obsession was with this civil war beyond the fact that stories about it were ever present in family lore. Yes, this novel was about a war, and a war leads to plenty of plot—but what was I looking at in this war? What was the diamond that I was turning over and over again in my hands? Within a week of hearing Leah’s advice, the core of my obsession started to revel itself. Much of this civil war happened in one city over six days—this was not World War II, no gargantuan taking-over of a continent, a decades-long war with players no longer individual—and it was apparent from all the history books how small changes could have changed history. A single person on one side or the other. An hour here, a different decision there. Had Americans occupied the country a day earlier or later, the country would have changed. And why did that bother me? Maybe because of how easily I might have ended up with an entirely different life in another country. Maybe because of the push when I was growing up to view things apolitically. I remember feeling that America was too behemoth to change, that I could absent myself from politics and it would rush past me. In contrast, I had heard of Trujillo and Balaguer in the Dominican Republic, but to my parents, the political system in the U.S. and secret police stealing people in the night were apples and oranges. And yet, there in the history books was how much the U.S. had to do with politics in the DR. Americans training Trujillo during the first occupation, Americans propping up the dictatorship for decades, Americans changing the tide of a war toward the military rather than an elected president, Americans pushing Balaguer into power. Apples creating oranges. And how many Americans, oblivious or apolitical, at home watching all of this on the news then turned off the TV?

And this was why learning about that civil war rocked me to my core: I am American. I am Dominican. And one generation back, part of my family was Puerto Rican, some drafted into the Vietnam and Korean wars as Americans. I am the product of all of this. I am split and split and split. So much of this could have changed with a stone’s-throw difference. How could everything have been different if small variables were changed? Who could I, a Dominican-American with family on all sides of the war, have been? And what responsibility did I have toward change now? There—there was the core of my obsession.

Thus Mayluz was born (literally, in the excerpt here) with a vision that made both our obsessions literal: the power to see other possible futures, timelines splitting and splitting, the power to change an entire world, to become something else. Suddenly, her vision was aligned with mine. Some people might describe this as finding their novel’s voice, but, for me, it was naming my obsession.

It took a magical conceit to break me out of getting sucked into other people’s stories, the whirlwind of yearnings about that time, the factual details of the history. This has been my way into historical fiction: a magical conceit that allowed me to bend the details of history in service to the truth of it, to my truth of it. With Mayluz’s vision, I am able to look where I need to.

There’s still a struggle, of course. There was a draft in which I cut Mayluz as the narrator, lost the handle on my obsession, totally lost my way again. That draft, though ultimately thrown away, gave me new characters. The novel had started as a multi-generational family story, then turned into a love story. Then, in this last draft, I realized that this story, which is about change, political violence, and identity, rested with characters that also embodied those obsessions, same as my narrator. It became a race to change time.

The same need for a conceit happened with each of my characters, and once I realized this, their powers came to me quickly. A Haitian-Dominican who is the strongest man in the world. A Dominican housewife who can bring people back to life. A Puerto Rican soldier, part of the American forces, who could trade places with his shadow. A Puerto Rican-Dominican doctor fighting for the constitutionalists who can see backward to the cause of any wound, the moment it was inflicted, and beyond. Together, they can save one person; change the fate of a nation. Together, they have the power to bring other worlds to life. For each of them, they slipped out of my hands until I grounded to them magical conceits that mirrored my own obsessions. I had multitudes within me, all of these characters exploring different sides of the same questions. When combined, they are fingers on a single fist. I can feel this will be the draft that sticks.

Brenda Peynado’s short story collection, The Rock Eaters, is forthcoming from Penguin Press in early 2021. Her stories have won an O. Henry Prize, a Pushcart Prize, the Chicago Tribune’s Nelson Algren Literary Award, inclusion in The Best American Science Fiction and Fantasy, a Dana Award, a Fulbright Grant to the Dominican Republic, and other awards. Her work appears in the Georgia Review, the Sun, the Southern Review, the Kenyon Review, the Threepenny Review, Tor.com, and other journals. She received her MFA at Florida State University and her PhD at the University of Cincinnati. She’s currently writing a novel about the 1965 civil war in the Dominican Republic and a girl who can tell all possible futures. She teaches in the MFA program at the University of Central Florida.