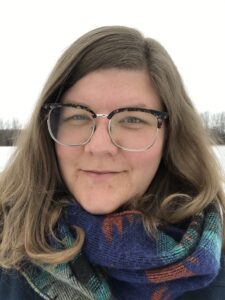 Martha’s essay, “Picnic,” appears in the Spring 2021 issue of Shenandoah, and was edited by fellow DW McKinney.

The not-so-secret secret is that I don’t know how to talk to my parents about being genderqueer. Water has consistently been the conduit through which my family communicates. Water loosens. It smooths. My mother took me to the waterfall in my hometown to tell me my daycare was closing when I was ten. When, at nineteen, I told my brother I was queer, we were walking next to a creek. While fishing on rivers, Dad and I talked about school, work, writing. But I didn’t talk to my parents about my gender.

I came out to my parents as gay during the winter when I was sixteen. My parents said they loved me. And then we stopped talking about it. Coming out in high school was a fast-paced affair. But my gender journey was slow and meandering. Coming out as genderqueer to my family felt less pressing than coming out as gay did.

I told my parents I was gay on dry land, far away from any of my water. If queerness was an island I lived on, my parents didn’t have any way to get to me.

Growing up, there were certain things I thought I would automatically be good at. One was telling people about my feelings. My dad is a psychologist; my mom was a computer programmer. My brother and I were raised on books, the outdoors, and using our “feeling words.” I was always writing, making art. I was always expressing myself. But in high school, I stopped telling my parents what I was feeling. I came out, then spiraled into a depression. I think I assumed that I would feel better after coming out. But that wasn’t the case. If anything, I felt worse. If you asked me at seventeen why I couldn’t talk to my parents about being gay, I wouldn’t have had an answer for you. I had done the hard thing of naming myself gay, but I couldn’t name the feeling of don’t be difficult. I wanted to make myself small for my parents. So, I did. Or I tried to.

It was a cork in my throat.

Nine years passed from that evening in the dining room when I came out—the carpet somehow hard underneath my feet, the light somehow too bright and casting shadows in all the wrong places—and in that time, I didn’t tell my parents about the partners I had or how my gender identity had changed. In my mind, I imagined my parents had a big blank spot in their understanding of who I was as a person. The complication came in that they didn’t know the blank spot existed. And they didn’t ask any questions, waiting instead for me to tell them any important updates. But even water didn’t loosen the cork in my throat. Not trout fishing on the Escanaba River. Not swimming in the Saint Croix River. Not the endless space and cleansing salt of the Atlantic Ocean and not even Lake Superior—full and clear and waiting.

Ten years passed, and I wrote a thesis about being queer and the water I called home. I gave copies to my parents. I had been writing myself down for nearly fifteen years, and my truths never scared me until I realized that not only would my parents read my work, but I wanted them to. And in reading my work, I would have to come out to them again.

I had always believed in the power of art. My parents gave me that and believed in that themselves. Both of them are music majors. Music—art—is what moves the world. My thesis is about being trans. It is also about the landscape—how the landscape is a type of body. And my body—my identity—is as fluid as the landscape.

I hadn’t explicitly told my parents I was genderqueer. But my thesis did. My thesis also talked about my pronouns. How I had started using singular-they pronouns. So, when my parents finished my thesis and didn’t mention anything about my gender, it felt like I had misplaced my faith in art. My parents only saw the water—their home water, too. It is a kind of gift to give people their home in a piece of writing. But I had also given them my body. And I felt invisible.

I had wanted art to do my job of talking to my parents. But that is not art’s job. And, of course, art had done its job. It had done exactly what it was supposed to do. A few months after my parents finished my thesis, I began talking to them about my gender and my pronouns. My thesis was a buoy. It allowed me to point to something and say, This is me—here and also here. On the page, and also in front of them. These conversations were uncomfortable, and occasionally painful. At the heart of each one was an aching desire to be seen, to be loved.

I don’t want it to sound like I believed my parents’ love was conditional. Language fails me here. See, so many queer kids find out their parents’ love is conditional, and I hold that anxiety in my throat—a cork. Because what if, despite all evidence to the contrary, asking my parents to use my pronouns was the line in the sand? What if language was what took away my parents’ love?

In water’s ability to loosen and soften is also its ability to erode. In my thesis was all the water of my life—how I was part of that water. Lake Superior held me through all of my gender ramblings and I wrote her and myself down. My thesis was a bridge. Or a canoe. A way to reach my island. An invitation.

I am not certain I know how to talk to my parents about being genderqueer, now. There are answers I do not have—how do I tell the rest of my family about my gender? I haven’t figured out how to hold the weight of a few members’ inevitable rejection of me. I am still working on understanding that loving only a certain version of me is a kind of conditional love. Like loving Lake Superior only when she is calm or loving the Escanaba River only when she is slow and steady. We do not put conditions on water.

The water of my youth—Lake Superior, the Saint Croix River, and the Escanaba River—brought me closer to myself. The art brought my parents closer to me.

Martha Lundin is a genderqueer writer and educator living in Minnesota. They graduated from the University of North Carolina Wilmington’s MFA program in 2017. Their work appears in Ninth Letter, Fourth Genre, Entropy, and others.