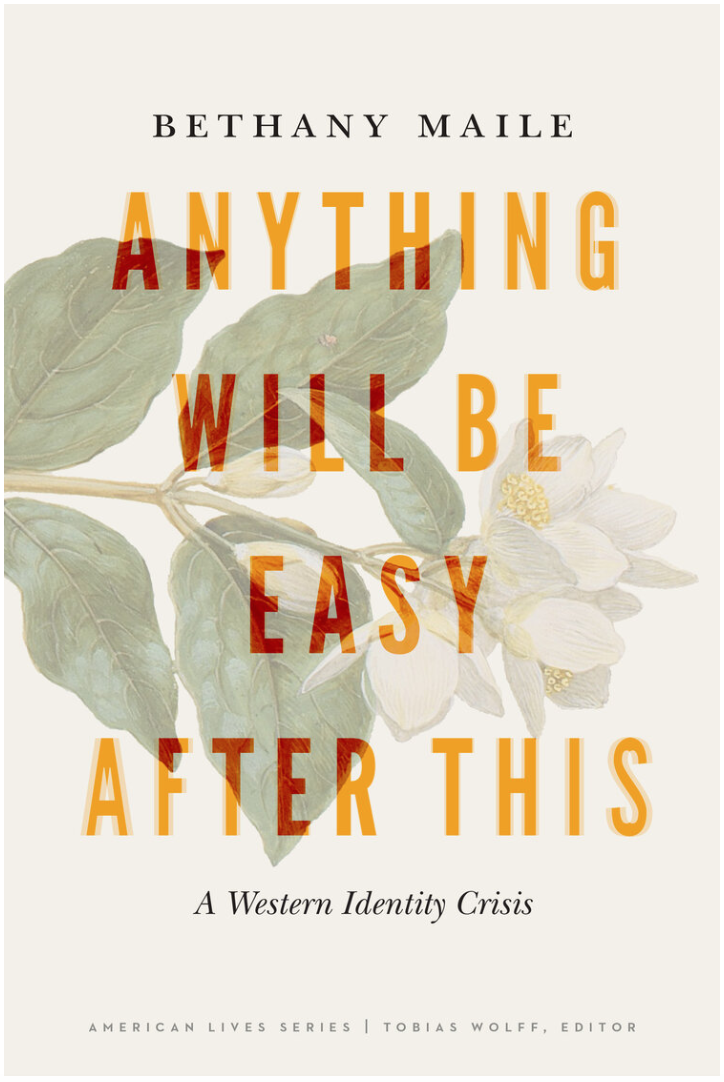 We’re excited about Bethany Maile’s new essay collection, Anything Will Be Easy After This: A Western Identity Crisis, out this month, and asked her to tell us more about it. Her essay, “What You Get is What You Give” is in our Fall 2019 issue.

Congratulations on the publication of book! Can you tell me the story of the book?

Thank you! Sure! I started writing this as a graduate student at University of Arizona.The first essay I wrote there was an early version of “Anywhere, U.S.A,” which is the second chapter in the book. I was in the Sonora Desert, which can look like the movie poster for a spaghetti western, and I was thinking so much about place—about where we’re from and how it shapes us. I’m from a farm-town-turned-suburb in Idaho, and up until that point, I had spent my adult life pushing and pulling with my home. I kept finding myself in far-off places—happy to be in them—but unable to shake the dream of the place that had grown me.

Preoccupation is the best word for this book. It was born from preoccupation—first with my bone-deep affection for the landscape that grew me, but then that bred a preoccupation with the ways that enchantment was misplaced and problematic I grew up on ten acres of high desert horse pasture that’s now surrounded by McMansion suburbs. And as ideal as I might remember my childhood on that plot of green land, I know that my parents’ building their home there carried its own footprint. So I became deeply preoccupied with trying to understand how we all shape place and how it in turn shapes us.

I think I knew I could make this into a book at the end of my first year of graduate school. I wanted to spend the summer back in Idaho sussing out the space between my idealized, “Wild West” home and the less-than-charming, suburban reality. So I spent that summer seeking out the vestiges. I watched ranchers bid on cattle, I tried to find a herd of wild horses on the prairie, I spent a week trailing rodeo queens as they competed for the state title. I knew I could weave all those pieces together, but when I got to the queens I had a real “A-ha” moment. The competitors were such a gift. They really led me to this important piece about what it is to be a woman in this landscape, and after that ideas about toughness and femininity became really important to the book. But all of those fringe, rural holdouts were useful. I wanted to understand how these Westerners fit in a world that’s largely left them and how I fit next to them.

Is there an essay/chapter or anecdote or paragraph or moment you feel is a good representative of the collection as a whole?

The title chapter, which is where I trail the rodeo queens, showcases a lot of what I wanted this book to do. It allows the reader to enter a little corner of the world that is quickly vanishing, one they might not otherwise access. But it also gets to the heart of the book: what it means to be from a place that is constantly evolving, and what it means to evolve with it even if it means leaving a version of the place (and yourself) that you love behind.

Also the chapter “Ladies’ Night at the Shooting Range” tracks my disenchantment with my (and America’s collective) relationship to the gun. Given our country’s gun crisis, that’s a conversation I don’t think we can pump the brakes on, like…at all.

In terms of shorter passages, there’s one from the back of the book that cuts to one of the book’s key ambitions. As much as this book is after big ideas (how we are shaped by place; how place and self must continually keep evolving), it also has a really simple ambition, which is to speak to the suburbanization that is chewing up small towns all over America. How can we grow responsibly? How can we redistribute population growth but do so while maintaining the integrity and culture of individual places? There’s a moment toward the end of the book where I speak to this directly, and it feels like a key takeaway for people all over America.

When people come here pursuing that wild place—the mustangs bucking through desert, the mountain trails fringed with suncups—I want to tell them, Come, find them. They’re here. The elk still rove, [even if in dwindling herds]. The sunsets are still fiery. But there are ugly parts too. Our entitlement and possession yield the worst kind of development. We get stuck in wars we refuse to quit. We haven’t reconciled our conflicting ideas about what the West is or should be, have failed to live coherently. The transfixing parts remain but only in fractions. So love the epic, enchanting parts of this place—the most beguiling facets of the old story—but love them with a loose grip. Love them for what they are—remnants to behold because of their scarcity, not as a denial of it…

When my husband and I picture [a farmhouse of our own], we quickly fill it with the children we hope to have. There is so much we will show them, we say. I imagine a child beyond the front porch, bending to lupine bunches. I see her peeling splinters from front steps. I see her asleep on my shoulder, smelling of lavender and sage. I see my father lifting her to a horse’s back and leading her through a corral. I see Ryan teaching her to cast a fly line in a river bend, to keep the wrist straight, to read the water for calm eddies. I see us feeding her potatoes around a campfire. I see us leading her across wheatgrass meadows, down steep and dusty paths to the cool relief of a shallow creek. I see us pointing to a deer on a hillside, and watching her eyes follow.

I want to give her what I had. I want there to be something to give.

I’m curious about some logistics: How did you come up with the title? How about the ordering of the book—its organization of the essays or the balance of reportage and lyricism?

The title was one of many gifts from the rodeo queens. Competing as a queen is super grueling. They were putting in like twenty-hour days. They work rodeo circuits in 100-degree heat and heavy denim and tons of leather. They have to know so much about the sport and horses and the state and agriculture. And I think one of the runner-up prizes is like a bag of horse feed and a grooming kit. So I was asking them why they do it and they gave me a lot of reasons (to preserve the sport, because they love it) but one of them just said really directly, “Anything will be easy after this.” And that bit of dialogue shot right to the heart of the grit-building that feels so true to the Western and even American ethos. The book was already mapping my relationship to grit—how as a child I’d absorbed the message to prize toughness above all else, even if it didn’t make obvious sense. So that moment of dialogue, I could just feel it echo through the project.

The order of the book came together pretty quickly. I knew I had to chart my disenchantment in a clean arc. And I had most of the chapters drafted as stand-alone essays, because I’d drafted the bulk of them from that summer I spent immersing myself in “western” phenomena. So then it was just about plotting around when and how I moved away from my intoxication with this place and pushed into a more clear-headed understanding of place and identity. So I knew, for example, that the cattle auction was pretty peak-infatuation for me, because it was cowboys, and I can fangirl out pretty hard in that scene (I blame watching a lot of Luke Perry in 8 Seconds as a preteen). But then the gun range and Country Strong, for example, those were hard moments of disconnection for me, so I knew those would need to come later.

Balancing reportage and lyricism was pretty natural. The bulk of the chapters are built around one “western” event, so there’s a lot of reportage laced in those, but they’re also braided in some way with the personal (this braiding varies chapter to chapter. For example with the queens I exist only as disconnected side notes). Usually the lyricism comes in strongest at the end of each chapter.

But what needed some care was the work the lyricism did. In an early draft of the book, each chapter tended to end with this big lyrical thrust and it was always keeping me entrenched in my enchantment with the myth. But I needed to be continually repositioning myself in relationship to the Old West myth so we could see my growth. I had to tweak those moments. So even if the language stayed softer and more evocative compared to the rest of the essay, I needed it to point to a different idea. I needed it to position me somewhere a little farther removed from the myth each time.

I feel very fortunate because when I was writing this book it just felt like a University of Nebraska Press book to me. I’d kept a steady diet of books from their American Lives series as I was writing, and I just imagined it finding a home there. And then it did, which felt right.

What’s it been like to release a book during a pandemic? I’m sure that’s been challenging in a lot of ways.

Given that it’s my first book, I don’t have much to compare it to. But I guess I still imagine a launch party and giving in-person readings at my most beloved bookstores and at universities, and at some point the denial will wear off and I’ll accept that that just isn’t going to happen. But I’ve also really loved seeing the way the industry has pivoted in creative ways. I think in some ways, as a reader/audience I’ve been able to access more because so much has been done online. So it’s my hope that as I start to do some online events that feels true to this book’s audience as well.

What are you excited about related to the book or your own work? Anything special you’re working on?

Yes! I am currently working on a memoir about motherhood. It’s such a strange time to be ushering my first book into the world while pivoting into my second. The backdrop feels totally unprecedented. Like what is the world we’re living in? What will the world be a year from today? Right now everything carries extra urgency and as a writer that isn’t without its appeal.

Bethany Maile is the author of Anything Will Be Easy After This: A Western Identity Crisis, which is forthcoming in fall 2020. Her essays have been notable selections three times in The Best American series, and her work appears or is forthcoming in the Rumpus, the Normal School, Prairie Schooner, and River Teeth, among others. Her essays are anthologized in Essay Daily: A Reader and What Happened on June 21st, 2018. She is writing a memoir about Alaska and motherhood, and she lives in Idaho with her husband and two daughters.