Ana Fores-Tamayo talks about her work with refugees seeking asylum in the US and shares the backstory of her poem “Marimacho” which appears in Volume 70, Number 1.

Our organization, Refugee Support Network, has been holding volunteer pro se asylum refugee workshops in the Dallas/Fort Worth area – that is, workshops for people who don’t have legal representation – since 2014. We help incoming asylum seekers from the Northern Triangle and other countries fill out their complex applications so they can stay in our country legally. Before all the restrictive regulations put in place to stymy immigration, we would hold these workshops every month. But with the ever-growing restrictions, we decided it was better to hold these workshops one month while the next month we had “packet pickup.” There, asylum seekers would make sure everything in their applications was correct and pick up their “country conditions” packet, another part of the process crucial to their asylum claim. By the time they presented themselves in court then, they were often better prepared — in terms of paperwork — than if they had a lawyer. Of course, it’s always better to hire an attorney, but since most asylum seekers cannot afford one, our clinic was an excellent alternative. We are hoping that with this new dawn in our country, asylum will once again be able to survive as a last resort for refugees entering the United States, as it has been completely shut down with one abrasive regulation after the next. Between that and Covid19, it was an impossible task to continue. 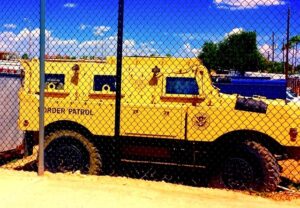 This above description gives context to the genesis of my poem “Marimacho” with its interpretation, “Butch, Marimacho,” a poem about a young gender non-conforming, queer woman, who suffered even more so than most in her home country and later, traveling north to find “freedom.” She suffered unendurable damage, forcing her to flee. Yet on her way north, she was castigated for her looks, her way of being. She could not hold down a job in Mexico, although the government had given her a permit of safe passage for one year. She could find work nowhere in the country as she traveled north, because everyone rejected her: they labeled her a freak.

As I mention in my bio, my art becomes a catharsis from the cruelty yet ecstasy of my work. Through it, I keep tilting at windmills. I write poetry as an expiation, to banish my demons, so that I can continue my labor. Those days I spent at the workshops, or later when I did asylum applications remotely for Lawyers for Good Government, I was emotionally drained, exhausted.

Poetry was the outlet I needed to let go of all my emotions, as I had to remain calm and composed for the sake of asylum seekers. I always had to give them the courage, the hope, the fortitude to face the odds against our cruel system (even when I myself did not have it). So poetry restored me, as it has always done. Not many outsiders will truly understand the gut-wrenching angst we feel digesting hours of harrowing stories, then having to transform them into black and white sensible matter, so that an impartial judge will understand them, and say yes, this person has a credible fear: she may stay in our country. We needed to take these asylum seekers’ agonizing tales of woe and transfigure them in order to demonstrate persecution based on one of the five protected grounds: race, religion, nationality, membership in a particular social group, or political opinion. I needed to take the story of this young woman, the pain she felt, and transform it so that it would make political sense to a judge granting her stay. 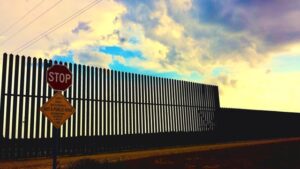 At the border, for miles & miles… © Ana M. Fores Tamayo

Coming from the Northern Triangle, most people we saw were women with children; most were here because of domestic abuse, to the point they truly feared for their lives; most knew someone who had been murdered or hurt by a spouse or partner. The other group was made up of mothers fleeing with their young children because they were afraid the maras or gangs were going to force their boys to work for them, or their girls, to become the maras’ “brides.” They fled to save their children; as mothers, how can we fault them? A few rare cases involved LGBTQ+ individuals. These cases were especially painful, though they should have been easier to win because of the prejudice faced everywhere. All these stories were real; they were mesmerizing, tearful, violent, excruciatingly painful. And all of them were unique. But most of these stories did not convey one of our government’s “sacred” protected grounds: the maras may be the de facto state in Central American governments, but for our government sensibilities, they are just private actors and those they harm are not worthy of asylum. Domestic abuse, too, they deemed a private family matter… So we needed to write these stories all down, factually, without prejudice, yet transform them so that we could bring out one of these protected grounds against all odds. We needed to try our hardest to give these women and children that one chance in hell at asylum. But even then, these asylum seekers would most likely lose. 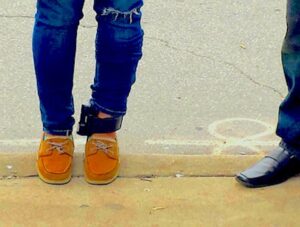 “Marimacho” was borne from one of these moments. After coming home from an exhausting workshop, I was especially shattered. The raw material originated in that one workshop: a fragile young woman bore her soul to me, little by little. Of course, I took her truth, and I fictionalized it. I changed it so that it was not only her but every asylum seeker like her, every woman who is made to feel the horror, the unbearable pain. Moreover, this retelling also became a purging for me: I had to let it go as I had internalized this woman’s pain, and now I was consumed by it. Only in writing it could I free myself from it. So was born “Marimacho.” Oftentimes, I write to expel the monsters within my life, so that I can then continue the work I do, positively, to help these refugees, to guide them through the labyrinthian minefields that consume the immigration court system. Although this is heart-wrenching work, it is at the same time quite satisfying, being able to help others one on one. Their pain, their sorrow, their joy, is quite humbling. And I would rather not do anything else, help anyone more, than I would these incredible women who show such courage. Though lately I have had to stop, given the state of the world, I am hoping that soon this world will right itself again. And I am longing to begin anew, to help the most vulnerable. Because only in helping others can I renew my “self.”

Being an academic not paid enough for her trouble, Ana Fores-Tamayo wanted instead to do something that mattered: work with asylum seekers. She advocates for marginalized refugee families from Mexico and Central America. Working with asylum seekers is heart wrenching, yet satisfying. In parallel, poetry is her escape. Her work appears in the Raving Press, the Laurel Review, Indolent Books, and many other anthologies and journals, both online and in print. Her poetry in translation and photography have been featured at home and internationally. Through poetry, she keeps tilting at windmills.