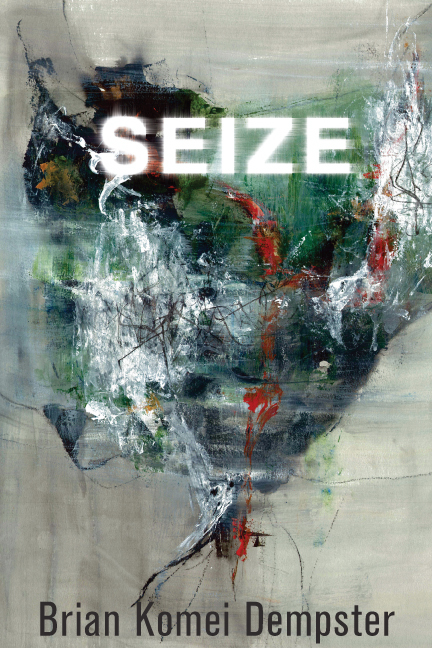 Brian Komei Dempster’s new book Seize was recently published by Four Way Books. We asked Brian to speak about the book’s powerful backstory and the unique process of publishing during a pandemic. Brian’s poems “Tangle” and “A Boy” appear in Volume 69, Number 1.

I started working on Seize when my son was one year old. As first-time parents, my wife, Grace, and I didn’t initially realize our infant son, Brendan, was not hitting typical milestones. Over time, the mystery of his condition increased, and our concern turned to anxiety when Grace’s mother, who is a doctor, said, “He should be walking and talking by now.” Her assessment was confirmed by the director of a day care center that Brendan attended. We took him to several specialists and found out he had global developmental delay.

One memorable day, we were in the office of a neurologist. “That’s a seizure,” she said as Brendan’s eyes fluttered. In that moment we discovered he had epilepsy and later found out he had cerebral palsy as well. After his diagnoses, we began our long quest, still ongoing, to avail ourselves of knowledge and effective treatments to help our son. At first, I wrote poems to process my chaotic feelings and thoughts in response to these events. At first, I didn’t know that I was writing a book—only that I was drafting poems that helped me.

Being a father to Brendan was the most challenging thing I have ever done, and writing was a way to document our lives together. I remember how helpless and sad I felt each time his eyes fluttered, his face scrunched up, his head jerked back, when he suddenly dropped to the floor. I remember the dry, dark air of the hospital and the bundle of blue and red and green EEG wires glued to Brendan’s head while Grace and I tracked the jagged lines on the screen, an ebb and flow of seizure activity. I remember asking myself, “What did I do wrong?” “How could we have prevented this?”

This book emerged out of necessity, out of a need to understand my vacillating emotions—of love and rage, resistance and surrender, gratitude and mourning. To articulate the impact of Brendan on me, on our marriage, our family members. To show who Brendan really was, his world beyond words, the meanings behind his silence, his magical ways of communication. To capture the weight of his suffering, the depth of his resilience, the intensity of his radiance. And to connect his experience of seizure to other seizures: my Japanese American mother’s unjust wartime incarceration in a prison camp; my cellist brother’s assault by a gang; acts of racial and homophobic violence; the PTSD of war veterans.

The collection took over a decade to write and revise. Seize felt finished once the father-son story was complete and served as a through line and powerful connecting thread for these diverse narratives.

The poem “Bird Cries” is a good entry point into the book’s main themes. The piece foregrounds the father-speaker’s paradoxical, multifaceted view of his son. Two lines capture this: “I keep him / from falling, keep him / from flying.” On one hand, the father protects his son from getting hurt; on the other hand, the father’s protectiveness prevents him from seeing his son’s full potential. The stanzas take the reader on a journey through the father’s emotional spectrum—from his impatience about his boy’s loud sounds to fears about what others will think to tenderness when his son attempts to communicate though gentle bird coos.

It also brings in other key characters and themes. The speaker’s parents chime in with their own thoughts about Brendan’s tendencies and true potential. The bird metaphor, a reoccurring one in Seize, helps the reader to better understand the many sides of Brendan. Indeed, the narrator’s insistence on comparing his son to other animals, natural phenomena, and everyday objects underscores the boy’s unique nature. At the same time, the power and limitations of the speaker’s language are reinforced by certain lines: “I fly to retreats to write / about him. When I come / back, he is still caged.”

I’m curious about some logistics: How did you come up with the title? How about the ordering of the book? The cover art?

At the Colrain Poetry Manuscript Intensive, led by the fabulous Joan Houlihan, the workshops have a very useful exercise. Each poet brings in a list of possible titles, some of them culled from manuscript poem titles or lines, and then the group discusses them. My manuscript was initially called Storm Music, but when the group heard Seize, they fell in love with that and convinced me it was the right way to go. Seize is a variegated verb with multiple reference points. Seize speaks to not only the medical condition of my son but other forms of seizure, the notion of being taken by force, whether physically or psychologically or both. It also means the ability to empower yourself by owning who you are and taking back what’s yours.

The ordering of poems went through various iterations before the final sequence fell into place. Grace had the great idea of beginning the manuscript in media res, in the middle of the family crisis, and then working through the stages of crisis towards a sense of resolution—no matter how ambiguous or complicated that resolution is. The opening poem, “Night Sky,” shows how the father’s idealized expectations for his son are disrupted by the realities of his boy’s condition. The final poem, “Tangle,” weaves key characters and events, creating a closure that is both intense and fraught yet hopeful and open-ended. While the order reflects the growth of the father and his relationship with his son and family, at the same time, the order links this present day family story to various experiences and themes: the speaker’s childhood, the volatility of race relations, the intergenerational legacy of wartime trauma, and others.

The cover art is a painting by my mother, Renko, whose artist name is Suiren. I was struck by how the image resonated with the content and themes of Seize. It contains the colors of the brain (gray, black, white, red) and evokes the impact of a seizure. Moreover, the various shapes offer room for interpretation—one might see a brain, heart, face, field, blood, and fire, among other things. All these elements are present in the poetry. Ryan Murphy, Associate Director at Four Way Books, is a brilliant designer who transformed this image into a stunning cover.

I was incredibly fortunate to have published my debut poetry collection, Topaz, with Four Way Books. I deeply respect Martha Rhodes, Director and Founding Editor of Four Way Books, and her whole team. When I got the amazing news that Martha had accepted Seize, I was elated and responded to her, Associate Director Sally Ball, and Ryan with enthusiastic gratitude. Throughout the whole process, Martha provided me with valuable edits, Ryan skillfully formatted the manuscript, and Bridget Bell copyedited and proofread the text with meticulous care.

What’s it been like to release a book during a pandemic?

It’s been an adventure. Scheduling events has been more difficult than before, largely because the world is in flux, and organizations face challenges in terms of resources and staffing. Against these odds, many venues have stepped up and more than met the challenge. I am grateful for their support, and I have upcoming virtual events with Eastwind Books, Hudson Valley Writers Center, Hugo House, Interabang Books, Japanese Cultural and Community Center of Northern California, Literary Arts, Malvern Books, and Poetry Flash. My September Instagram Live launch reading with Four Way Books required me to learn new technology, but it was a total blast and worthwhile. While I miss in-person readings, scheduling has been easier in some ways, because travel is not a factor. Moreover, online formats allow us to reach broader audiences. It’s my hope that these presentations will allow more people to tune in and provide some inspiration during this tumultuous time. It’s my hope that the work will resonate with parents of special needs children and parents in general. It’s an honor to enter the conversation, to be part of a growing body of literature about issues of disability that deserve our care and attention.

Along with the generosity of event organizers, I have been buoyed by the warmth of community: mentors and colleagues who have given me words of encouragement; journal editors—like Beth Staples and Lesley Wheeler of Shenandoah—who first published poems from Seize and have offered to support the book through interviews and reviews; Clarissa Long, Publicity Director and Assistant Editor at Four Way Books, who has been a wonderful collaborator and done a terrific job with marketing and promotion; and friends and family who have been there the whole way.

My advice for other people who are about to publish their books: Believe. Be fierce. Persist. Stay strong. Revise. Let the manuscript sit. Revise. Let it percolate. Revise again. But don’t ruin it by overediting! Make sure to keep the core feeling of each poem intact. And when you lose hope, freak out that you’ll never realize the poem you envisioned, be kind to yourself. Connect with others. Find mentorship. Find community. Find yourself. Once the book is published, “Go with the flow,” as my mother and father say.

Anything special you’re working on now or next?

With Seize, I am shedding my fear of being vulnerable and judged. As artists, we balance candor and compassion. We grow by addressing new themes, navigating difficult terrain. As a result of being a poet and, more specifically, writing this book, I am more comfortable in my own skin, more calm and accepting of my life. It’s a joy to give voice to my incredible son. This process is exciting; by opening a window to truly see him, I am slowly healing myself and maybe helping others along the way.

Currently, I am working on a third, in-progress poetry manuscript, tentatively titled Dust and Rain, that is an independent, distinct work and, at the same time, the final part of this poetic trilogy. I am also working on a creative nonfiction manuscript of essays, called Brendan’s Garden: Reflections on a Special Son. It’s fun and invigorating to step into these worlds.

Brian Komei Dempster’s debut book of poems, Topaz (Four Way Books, 2013), received the 15 Bytes 2014 Book Award in Poetry. His second poetry collection, Seize, was published by Four Way Books in fall 2020. Dempster is editor of From Our Side of the Fence: Growing Up in America’s Concentration Camps (Kearny Street Workshop, 2001), which received a 2007 Nisei Voices Award from the National Japanese American Historical Society, and Making Home from War: Stories of Japanese American Exile and Resettlement (Heyday, 2011). He is a professor of rhetoric and language at the University of San Francisco, where he serves as Director of Administration for the Master of Arts in Asia Pacific Studies program.