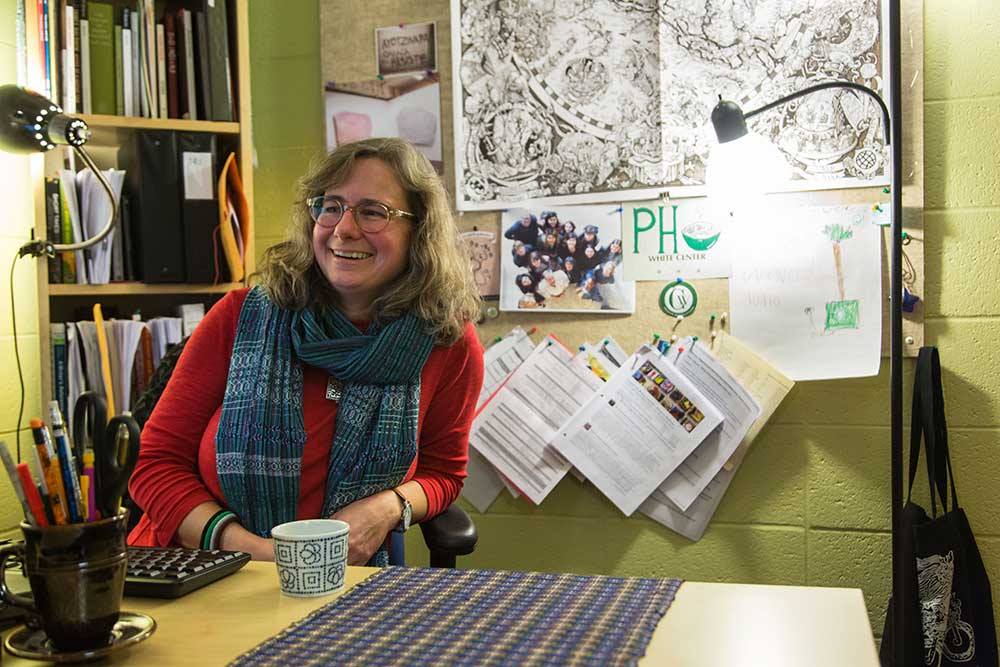 Wendy Call shares her thoughts on the collaborative process of poetry translation. Irma Pineda’s poems and Wendy’s translations “My feet won’t pause” and
“I traveled the path from the south” appear in Volume 69, Number 2.

Irma Pineda’s 2007 poetry collection, Xilase qui rié di’ sicasi rié nisa guiigu’ /La Nostalgia no se marcha como el agua de los ríos (Nostalgia Doesn’t Flow Away Like Riverwater) includes a series of twelve poems entitled “Lu neza / Sobre el camino.” The title doesn’t translate neatly into English; it could be “On the Path” or “About the Path.” Both titles are apt; the series depicts a migrant walking across the desert to get to El Norte and reflects on the physically and psychologically tortuous process of this crossing.

The whole book is a collection of thirty-six persona poems telling a story of separation and displacement in two fictional voices: a person who migrates from southern Mexico to the United States to work, and that person’s partner, who waits at home.

Irma Pineda publishes the majority of her work bilingually, in Spanish and in Diidxazá, or Isthmus Zapotec. A family of languages containing dozens of distinct variants, Zapotec has a longer written history than any other New World language. Around 600 BCE, the Zapotecs began using a glyph-based system to record their history. This glyph recording system persisted for fourteen hundred years, falling into disuse half a millennium before the Spanish arrived in southern Mexico. For nearly an eon, Zapotec literature continued as an entirely oral tradition. In the 1890s, Isthmus Zapotecs began to use a transliterated Latinate alphabet to record their poems, stories, histories, songs, and jokes. Today, Diidxazá literature is vast, varied, and vibrant.

Pineda has published nine collections of poetry, eight of them bilingual Diidxazá Spanish, since her first collection appeared in 2005. The two poems in this issue of Shenandoah are from her third collection. For many years Pineda has been a professor of intercultural education at the campus of the National Teachers University near her hometown of Juchitán, Oaxaca. She currently serves as a senior advisor to the majority party in the Mexican Federal Legislature, on issues of science, culture, and education. As of January 2020, she is also serving a three-year term as a Vice President of the United Nations’ Permanent Forum on Indigenous Issues.

Pineda and I have collaborated for a dozen years to bring her poetry into English. Because her poetry is bilingual, and I understand very little Isthmus Zapotec, the translation process is quite involved. I create a draft translation based on the Spanish original and by looking up words in an Isthmus Zapotec-Spanish dictionary. I listen to audio recordings of her reading the poems. Pineda is a talented, sought-after performer of her work, so I am lucky to have access to audio or video recordings of many of her poems. Once I have a draft translation of a full collection, I meet with Pineda in person to review each poem, to learn more about the Zapotec versions, and to learn context and history for each poem. Because Pineda is a longtime teacher and translator, she has a wonderful ability to deeply and patiently explain her work. This process helps me bridge the many gaps of not being Mexican, Latina, or Indigenous. After our meetings, I revise my translations and then focus on what I think of as “six S’s” of each poem in English: shape, sound, structure, symbolism, significance, and spirit.

Irma Pineda and I are both grateful to have these two poems from Nostalgia Doesn’t Flow Away Like Riverwater appear in Shenandoah. As Pineda says, this publication is “the gift of a joyful star” during the long night of the coronavirus pandemic.

Wendy Call translated In the Belly of Night and Other Poems by Irma Pineda (Pluralia, 2020); wrote No Word for Welcome (Nebraska, 2011), winner of the Grub Street National Book Prize for Nonfiction; and coedited Telling True Stories (Penguin, 2007). She was a 2018-2019 Fulbright scholar in Colombia, teaches creative writing at Pacific Lutheran University, and makes her home in Seattle. These translations were supported by a 2015 Literature Fellowship from the National Endowment for the Arts.