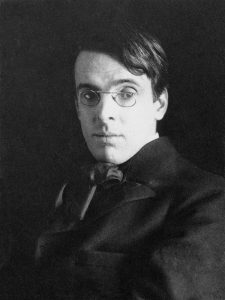 I.
AROUND me the images of thirty years: An ambush; pilgrims at the water-side; Casement upon trial, half hidden by the bars, Guarded; Griffith staring in hysterical pride; Kevin O’Higgins’ countenance that wears A gentle questioning look that cannot hide A soul incapable of remorse or rest; A revolutionary soldier kneeling to be blessed;

II.
An Abbot or Archbishop with an upraised hand Blessing the Tricolour. ‘This is not,’ I say, ‘The dead Ireland of my youth, but an Ireland The poets have imagined, terrible and gay.’ Before a woman’s portrait suddenly I stand, Beautiful and gentle in her Venetian way. I met her all but fifty years ago For twenty minutes in some studio.

III.
Heart-smitten with emotion I Sink down, My heart recovering with covered eyes; Wherever I had looked I had looked upon My permanent or impermanent images: Augusta Gregory’s son; her sister’s son, Hugh Lane, ‘onlie begetter’ of all these; Hazel Lavery living and dying, that tale As though some ballad-singer had sung it all;

IV.
Mancini’s portrait of Augusta Gregory, ‘Greatest since Rembrandt,’ according to John Synge; A great ebullient portrait certainly; But where is the brush that could show anything Of all that pride and that humility? And I am in despair that time may bring Approved patterns of women or of men But not that selfsame excellence again.

V.
My mediaeval knees lack health until they bend, But in that woman, in that household where Honour had lived so long, all lacking found. Childless I thought, ‘My children may find here Deep-rooted things,’ but never foresaw its end, And now that end has come I have not wept; No fox can foul the lair the badger swept —

VI.
(An image out of Spenser and the common tongue). John Synge, I and Augusta Gregory, thought All that we did, all that we said or sang Must come from contact with the soil, from that Contact everything Antaeus-like grew strong. We three alone in modern times had brought Everything down to that sole test again, Dream of the noble and the beggar-man. VII And here’s John Synge himself, that rooted man, ‘Forgetting human words,’ a grave deep face. You that would judge me, do not judge alone This book or that, come to this hallowed place Where my friends’ portraits hang and look thereon; Ireland’s history in their lineaments trace; Think where man’s glory most begins and ends, And say my glory was I had such friends.

W.B. Yeats is widely considered to be one of the greatest poets of the 20th century. In literary and academic circles his reputation precedes him so I’ll keep the introductory formalities brief. Although he won many awards throughout his long and illustrious career, his most prestigious recognition came in 1923 when he was awarded the Nobel Prize in the Literature. He was the first Irishman to be honored. The committee praised his work as “inspired poetry, which in a highly artistic form gives expression to the spirit of a whole nation.”
With Saint Patrick’s Day on the horizon, it’s fitting that we remember the contributions of the Emerald Isle’s foremost poet. In the particular poem, “The Municipal Gallery Revisited,” the narrator recalls a visit to the Dublin City Gallery The Hugh Lane, at the time known as the Municipal Gallery of Modern Art, where he remarks on the faces and legacies painted on the walls. While the particular figures to whom this eulogy is addressed have their own important place in Irish history that may be too long, too nuanced, too political, or too important to condense and tell here, the sentiment towards the end of the ballad resonates most.

When I think of this poem, I’m reminded of an old friend, who recently sent me the final lines of this poem in a message—

Think where man’s glory most begins and ends,And say my glory was I had such friends.

As Yeats revisits old friends and old memories, he is “heart-smitten with emotion.” And, although I can’t say with certainty what inspired the sentimental message from my, it struck me with a wave of nostalgia and coincidental gratitude—smitten. I cannot divine Yeats intentions in writing these final lines, but I can relate them to personal experience—it can be rewarding to revisit in memories old friends from our own lives and in visiting, be thankful.