Heard you that shriek? It rose
So wildly on the air,
It seem’d as if a burden’d heart
Was breaking in despair.

Saw you those hands so sadly clasped—
The bowed and feeble head—
The shuddering of that fragile form—
That look of grief and dread?

Saw you the sad, imploring eye?
Its every glance was pain,
As if a storm of agony
Were sweeping through the brain.

She is a mother pale with fear,
Her boy clings to her side,
And in her kyrtle vainly tries
His trembling form to hide.

He is not hers, for cruel hands
May rudely tear apart
The only wreath of household love
That binds her breaking heart.

His love has been a joyous light
That o’er her pathway smiled,
A fountain gushing ever new,
Amid life’s desert wild.

His lightest word has been a tone
Of music round her heart,
Their lives a streamlet blent in one—
Oh, Father! must they part?

They tear him from her circling arms,
Her last and fond embrace.
Oh! never more may her sad eyes
Gaze on his mournful face.

No marvel, then, these bitter shrieks
Disturb the listening air:
She is a mother, and her heart
Is breaking in despair.

Frances Ellen Watkins Harper stands out among the earliest prominent African American poets. Born in Baltimore in 1825, Harper was the only child of free African American parents. At 20-years-old, she published her book of poetry. She continued to write poetry, essays, short stories, and novels throughout her life. 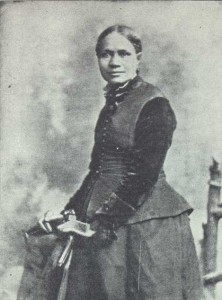 Themes of spirituality, feminism, and civil rights fill Frances E. W. Harper’s ouevre and reflect her time spent advocating abolition, education, and other social causes. She helped slaves escape via the Underground Railroad in 1851. In 1853, she aligned herself with the American Anti-Slavery Society to speak out publicly on the issues of abolition and policy. Harper wrote “The Slave Mother” the following year. Decades later, she went on to help establish the National Association of Colored Women.
In the verse above, we readers rest alongside Harper, flies on the wall, watching but not doing anything to help. What I find most intriguing are the poet’s circular and aquatic symbols. As Harper describes the relationship between the slave mother and the child, she uses both types of symbols to create a metaphor for maternity, fertility, and feminism. First, Harper calls the boy his mother’s “only wreath of household love.”  The wreath recalls the cyclical nature of reproduction and, even more exclusively to women, the curve of a pregnant belly. Historically, a wreath’s purpose ranges from heraldry to holidays to funerals. Here, the slave mother’s child represents her “pains” of labor and celebrates her own womanhood, motherhood, and lineage. This mother, however, is forbidden from rearing her child in a normal domestic condition because of her slave status. They are instead driven apart. The wreath metaphor then warps into the slave mother’s defiance against her oppressed rights to bear and raise her own children and her protection of her family, her “household.”

Next, Harper compares the love between the mother and son to a “fountain gushing ever new,/amid life’s desert wild.” The contradictory images of flowing water and barren wilderness pits fertility against sterility, life against death. The positivity as well as the mysticism connected with fountains in myth (e.g., the Fountain of Life, baptism, Fountain of Youth), makes the boy all the more sacred and holy to the slave mother.  The fountain’s continuity, cyclical flow brings both mother and child together as a “streamlet blent in one.”  Fluidity fuses the two. Until an em dash halts the metaphor and diverts our hope to a cry to “Father,” the third and absent piece of this family. But is this not also a jab at female oppression under patriarchy? The mother bears the most weight and burden throughout pregnancy, birth, and bearing. So why, now, must the speaker refer to “Father” as if he has so much authority?  Why would God even allow, or perhaps even call for, this separation between mother and child?  Harper casts a distant and even dark impression of an absent father, both biological and heavenly. Finally, the mother’s “circling arms,” rounded again like an impregnated stomach, surround the boy in a protective womb.  But the mother’s attempts to conceal and protect the boy fail; their “last and fond embrace” is torn apart, and the circle connecting them is finally terminated. In this poem, Harper paints slavery as the enemy of all of these maternal images. She captures slavery as it deliberately suppresses and strips women of their rights to motherhood and womanhood.

“The Slave Mother” was first published in Poems on Miscellaneous Subjects(1854) and can also be found in American Poetry: The Nineteenth Century(The Library of America, 1993).