It’s just the wind she says,
and not the cigarette pull
of a stranger in the roadside weeds,
the wind, and not the ember burrowing
like a mite in a dead bird’s wing
or your fear that the weeds will catch
and it won’t be wind any more,
the wind, and not the shadow
blazing brush toward the few
still-lit windows that glow
like cigarette tips through the leaves,
but the wind, the wind,
through his hair, his lungs,
his easeful steps quiet
as the wind or the wisteria
gripping the screen or the small boy
running through the moonlit woods
from the man who entered
like the wind in his ears
as the trellis bends
to those open, hungry hands,
or the maple shuddering at the screen
where no one’s home
but the wind that watches itself fall
to the man whose suit of flame
crackles like the wind
that comes through the screen
like a mother saying
hush it’s just the wind
or a mother saying
hush it’s just the wind.

In this hypnotic poem, originally published in New Orleans Review and then in Jake York’s first collection Murder Ballads (Elixir, 2005), the methods of lullaby contribute to an ominous, Grimm, atmosphere.  Whether someone or something physical and external or something internal and doubly haunting, the stranger with his “suit of flame” reminds us how close and near-domestic peril can be.  We say one is “afraid of his own shadow” to suggest complete lack of courage, but what’s more dangerous than our own shadow?  Here York begins to sidle up to his great subject — what one person (maybe he, but just as likely you or I) might do to another, and how difficult to extinguish that ember that might ignite conflagration.  He would pursue that question across the horrors of American civil rights violations till his own sad death this month. 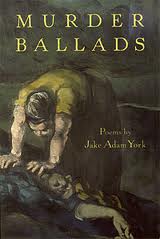