Some time when the river is ice ask me
mistakes I have made.  Ask me whether
what I have done is my life.  Others
have come in their slow way into
my thought, and some have tried to help
or to hurt: ask me what difference
their strongest love or hate has made.

I will listen to what you say.
You and I can turn and look
at the silent river and wait.  We know
the current is there, hidden; and there
are comings and goings from miles away
that hold the stillness exactly before us.
What the river says, that is what I say.

I thought of this poem today because it’s been cold as Dante’s Hades lately, and “when the river is ice” has an almost irresistible allure.  But as soon as weather invited it in, reflection embraced and clung to it.  When I look about at the current storm of extravagant poetic styles, it’s often hard to find a still point, a moment of persuasive contemplation.  That’s when it’s time to turn to Stafford, though the currents of solace in his work are always counterpoised with a tone of resignation.  If you want to save this poem in the mysterious sector of your mind, you may find my probing, while hardly exhaustive, a little annoying.  I’m in a ruminative mood.  If you prefer original recipe, just read the poem again and leave me out of it.

The narrator begins by admitting that he’s made mistakes, and they’re not easy to own up to.  That understanding leads to asking if there’s a gap between being and doing, then he admits that the healing and harming actions of others have probably contributed little to the answer to this asking.  Indirectly, I believe he’s refusing to dodge any responsibilities or take any credits.  He reiterates the invitation of the title three times in the stanza, making certain the listener understands that he earnestly wants to be asked.  One imagines this little credo is in the midst of a conversation, and the narrator is attempting to allay some friction.

Even in two seven-line stanzas, the sonnet shadow falls heavily on this poem.  It has a two or three part structure, two if the last line just extends the rest of stanza two, three if it deeply complicates it or subverts it.  Many of the lines are decasyllabic or close to it, and there’s just enough rhyme (especially “say . . . away . . . say” in stanza 2) to suggest a formal feeling.  The six accents in the last line reinforce the feeling of rhetorical finality, though the poem ends on an expansive note.

The narrator is saying — to you, me, any wilderness willing to listen (See Stafford’s “Traveling through the Dark.”) — you can ask me about my identity and its relation to others.  And if you do, I won’t dismiss your question, but I recommend that we look and listen and wait until we can fully appreciate both the still silence and the dynamic that “hold[s] the stillness exactly before us.  “Before us” both spatially and temporally.

Then he takes the enigmatic, wisdom-teacher way out: “my answer is that wordless, mysterious nature of the river.”  So we’re left with an analogy which will leave some readers saying “cop out; coy; that’s a dodge” and others consenting to accept and consider the ways that nature’s example argues against our trust in rhetoric.

One of my favorite aspects of the poem is the way the questioner and the interrogated narrator occupy the first stanza as separate, perhaps caught in a tense moment of difference.  But the second stanza begins with an invitation to cooperate, leading to “you and I,” leading to “we” and “us.”  Once the speaker and his questioner — imagined, single or collective — have merged, the narrator makes a straightforward statement which has the structure and rhythm of decisiveness, and it is decisive, just not explicit or literal.  I’m left feeling that the narrator of the poem and the river are quite similar — still and cold on the surface, forbidding, but underneath full of energy and complication.  And the day’s swelter has been diminished by chilly contemplation. 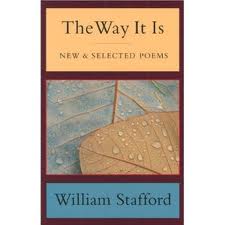 “Ask Me” can be found, among other places, in Stafford’s New and Selected Poems, published by Graywolf in 1999.