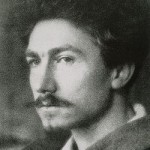 Come my cantilations,
Let us dump our hatreds into one bunch and be done with them,
Hot sun, clear water, fresh wind,
Let me be free of pavements,
Let me be free of printers.
Let come beautiful people
Wearing raw silk of good colour,
Let come graceful speakers,
Let come the ready of wit,
Let come the gay of manner, the insolent and the exulting.
We speak of burnished lakes,
Of dry air, as clear as metal.

The dissatisfaction of a restless wanderer is an itch or a push that may remain dormant for a while, and thus go unnoticed and unfulfilled. Yet, ultimately, the wanderer’s urge to leave and explore reawakens, impelling his flight. In “Come My Cantilations,” Pound communicates his discontent with village life—its “[h]ot sun, clear water, [and] fresh wind,” and its “pavements” and “printers.” The positive nature of the things the poet is tired of emphasizes the degree of his restlessness. He would rather have the “dry air” of a city than the “fresh wind” of the village, and he would prefer the “burnished lakes” of urban pollution to the “clear water” of the countryside. By leaving this “bunch” of “hatreds” behind, the poet believes he would be rid of them permanently; he seeks a tabula rasa of sorts—a new location for a fresh perspective. And perhaps the final attainment of total satisfaction.

A “cantilation” is a ritual chanting. As an established wanderer, Pound’s unrest has become ritual, and is manifested by his chants that convey what he seeks. Biographically, Pound lived for stretches of time in America, London, Paris, and Italy. He left each place with a sense of disappointment, as either it or he (or even both) did not fulfill his expectations. He pushed to find somewhere he would be able to flourish.

Ezra Pound was born in Idaho in 1885, and died in Venice in 1972. He was a key figure in the early modernist poetry movement, as well as the central founder of the Imagism movement, which advocated the use of precise imagery and sharp language. As an editor for several London literary magazines, Pound aided in the discovery of such writers as T.S. Eliot, Robert Frost, and Ernest Hemingway.