Poem selected and commented on by Trang Nguyen

I first looked Ocean Vuong up because he was an author born in Saigon, Vietnam who now resides in New York. “Headfirst” is exactly what I expected from such heritage – a powerful piece about maternal love that is closely related to the Vietnam War.

The opening lines from a Vietnamese proverb which means “Nothing can compare to rice and fish/ Nothing can compare to a mother and her child” catch my attention, as it not only signifies a poem rich in maternal affection but also points to a traditional approach in portraying such a highly elevated relationship in Vietnamese culture. Yet the fragmented form evokes exotic and uneasy feelings. On the first read I thought Vuong wanted to imply the fracturing effect of the war, but perusing it the second time gave me the impression that the mother – the narrator – was probably making emphasized statements too. 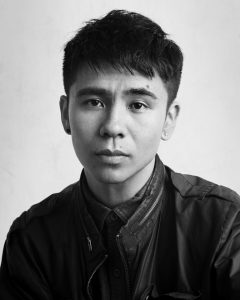 The poem can be separated into two parts that have the same structure, starting with “Don’t you know?” and ending with “My son,” in which the later is dominantly longer and more eloquent. Tension builds up as the piece goes, with the explicit clues such as “fire,” “skulls,” and “the dead” cumulate at “a war-woman.” Here the mother makes it clear that she is talking about a pregnant mother who participated in the war along with her male comrades, a story often neglected when it comes to glorifying their bravery, determination, and heroism. She is grounding a bold statement of self-awareness but also feminism.

Yes, the war appears brutal – it is “the hunger of dogs,” but the mother’s fortitude and profound love for her child surpasses it all. The poem couldn’t end in a better way – the last two lines are too packed with daunting intensity to be neglected. The mother affirms her son’s sense of self, saying that ever since his birth he has been indomitable, that he has headed straight into the war, and that his steadfastness is not to be questioned. The image of “a blade that sharpens by cutting” ties to the theme of war, while at the same time underlines the toughness.

The lesson that the mother is giving in “Headfirst” is no new story in a context of Vietnamese upbringing culture. It is not the transparent motherhood, however, but rather the son’s admiration and love for his mother that lingers in my mind. Such a beautifully heroic portrait of a mother must have come from a deep and unquestionable fondness.

Ocean Vuong currently serves as an Assistant Professor in the MFA Program for Poets and Writers at Umass Amherst. His debut poetry collection, Night Sky with Exit Wounds was a winner of the T.S Eliot Prize, the Whiting Award, the Thom Gunn Award, and the Forward Prize for Best First Collection.