I DREAMED that one had died in a strange place
Near no accustomed hand,
And they had nailed the boards above her face,
The peasants of that land,
Wondering to lay her in that solitude,
And raised above her mound
A cross they had made out of two bits of wood,
And planted cypress round;
And left her to the indifferent stars above
Until I carved these words:
She was more beautiful than thy first love,
But now lies under boards.

Poem selected and commented on by Madison Hutchins

After reading the first line of the poem, the reader is aware that the narrator is about to recount a dream. By using the word “strange” to specify how the death took place in a “strange place,” Yeats stresses the importance of home from the beginning. If he were comfortable with the idea of a foreign land, the word strange would not be utilized. Yeats initially shields the importance of the person who has died, but as the poem progress, the reader becomes aware that the narrator is dreaming about someone who he loves dearly.

Yeats’s lyrical dreamscape expresses one of his consciousness’s deepest anxieties. While there is no definitive meter, there is certainly a clear rhythm.

Using a dark and unsettling tone in the third and fourth lines, Yeats paints a picture of how the “peasants” of the foreign land “nailed the boards above her face.” Yeats emphasizes how she has died a lonely death away from home as the people of this land who do not know anything about her are the ones that bury her. 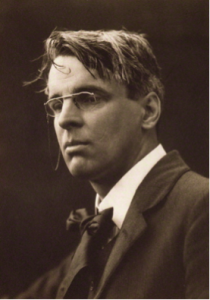 “A cross they had made out of two bits of wood” presents the idea that her grave is neither made nor tended by a loved one. She was found by strangers who knew nothing about her and exerted minimal effort in burying her. His references to the cross and to a planted cypress tree add a religious and spiritual component. Often placed in cemeteries because they look sad, the cypress tree further emphasizes the solemn tone of the poem.

The last two lines emphasize how beauty fades. This is illuminated by the shift from “she was” to “but now.” Buried in the dirt, her beauty is now unseen by the world. The narrator’s use of the word “lies” has a double meaning when he says that his love “lies under boards.” Not only does she physically lie in a coffin, but her beauty is now a lie as she will slowly decay and will no longer be beautiful.

At the end, the narrator turns the attention to the reader by using the word “thy.” The reader becomes even more emotionally attached to the poem by reflecting on his own first love. By traveling to her grave and carving an inscription, the narrator makes sure the world knows she is loved for eternity.

Yeats wrote this poem about the woman he loved, Maud Gonne. At the time this poem was written, she was traveling to France. Yeats was afraid she would die on her trip as she was predisposed to illness. The historic context shows how the poem was personal to Yeats; however, the themes are important with or without historic context.

William Butler Yeats (1865-1939)was an Irish poet who is widely considered to be one of the greatest poets of the 20thcentury. The love he had for Maud Gonne was unrequited, yet she serves as the muse for many of his poems. His obituary notes that “It has been said his laughter was ‘the most melancholy thing in the world.’” “A Dream of Death” can be found in the greater body of his work, The Collected Poems of W.B. Yeats, firstpublished in 1903.