Poem selected and commented on by Jenny Bagger

The Great War Poets, especially Wilfred Owen, always fascinate me. I won’t purport to have a precise explanation as to why, other than the continual curiosity of exploring the emotional toll of war, determined rhythm, and vivid diction of their poetry. I especially appreciate the intense imagery of Owen’s “Anthem for Doomed Youth,” one of his revealing judgments of war written but not published during his lifetime, his life cut short in battle before he could be recognized as one of the influential war poets. “Anthem for Doomed Youth” adopts the form of a slightly altered sonnet, directly opposing the love and romance typically associated with the sonnet form with the harsh depravity of war that Owen describes in satisfying detail. Rather, “Anthem for Doomed Youth” is an elegy that chillingly laments the brutal ends of young soldiers’ lives in the trenches. It was written one year before Owen’s own death in battle, which was one week before the Armistice, making his description of funeral rites on the battlefield and slaughter of young men like cattle even more chilling. 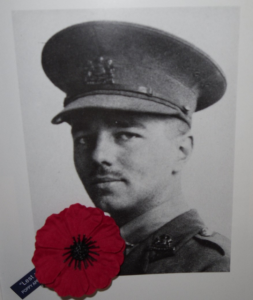 Owen wrote “Anthem for Doomed Youth” while he was treated for shell-shock at Craiglockhart War Hospital, along with fellow soldier, sufferer and war poet Siegfried Sassoon. Influenced by Sassoon, Owen’s poetry began to transform. He highlights the finality of death at war versus the promises of peace and heroism from people back home, specifically the members of the Christian clergy, in “Anthem for Doomed Youth.” His use of religious imagery and “holy glimmers of goodbyes” matched with the contrasting “monstrous anger of the guns” and “stuttering rifles’ rapid rattle” contributes to his striking expression of the horrors of war that contradict the lies told back home. Ultimately, Owen upholds respect for the duty of the soldier yet calls to question, through graphic images and strong associations, the motives of those who impose this duty on the young men who die violently on the front.

While I will always believe in the significance of the Great War Poets, Owen’s poetry remains relevant to society today because it demands attention be given to the emotional impact of war and the sacrifice and suffering of soldiers for their countries. “Anthem for Doomed Youth” is written in iambic pentameter, rhythmically imitating the marching footsteps of young men embarking on a battle from which they are not guaranteed a retreat. This rhythm is disrupted a few times as Owen’s premonitions about sending young men to the front disrupt society’s heroic celebration of war. Owen’s call to question of the continual deployment of young people, rather the “doomed youth,” to war strikes true today as we remain in the longest war in U.S. history.