At the store, on the hanger, the blue dress must have fallen
like water to a froth of frilled hem, its bodice as smocked
as a christening gown. A season out of date, her mother chose it
from our local department store chiefly for the high collar,
but I knew it was a dress Lisa wouldn’t have been caught
dead in. Just hidden under the neckband of lace, the circle
of her purple necklace, each dark bead a fingertip of efficient
bruise that we already knew about anyway, and simply went on
imagining, as we, her classmates, filed past the white coffin.

Republished with permission from the author.

By foregoing the dramatic in favor of both simplicity and vivid

imagery, Driskell creates a sense of mystery that is dominant throughout “What the Girl Wore” until the final line of the poem, when it is finally revealed that the blue dress with a bodice “as smocked/as a christening gown” is to be worn by the recently deceased Lisa. In an effort to mislead the reader, Driskell maintains an unusually apathetic tone, however, some of her double entendres suggest a more complex reason for the poem’s lack of emotion: perhaps Driskell is mirroring our tendency to suppress emotions in the face of great tragedy and sadness. Furthermore, the speaker’s impassivity could carry implications of Lisa’s own alienation from those around her prior to her death—while the speaker is familiar enough with Lisa to understand her fashion preferences, she refers to herself merely as one of Lisa’s classmates as she “file[s] past the white coffin.”

The feeling of suspense created by Driskell’s ambiguity reaches its height with her description of “each dark bead a fingertip of efficient/bruise that we already knew about anyway.” While this image engenders certain suspicions concerning the cause of Lisa’s death, the indifference with which the speaker reacts raises additional questions of the onlookers’ familiarity with such a sight.

Driskell heightens the impact of her ultimate revelation by withholding mention of Lisa’s funeral until the final line of the poem, and in doing so, she ensures that the conclusion of “What the Girl Wore” is as troubling as it is unexpected. 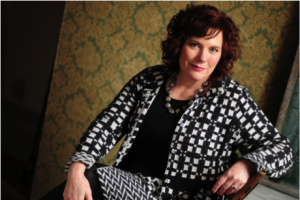 Award-winning poet and professor Kathleen Driskell serves as the Associate Program Director of Spalding University’s brief-residency Master of Fine Arts in Writing Program, where she is Associate Professor of Creative Writing. Driskell’s work has appeared in many nationally known literary magazines, including North American Review, The Southern Review, and The Greensboro Review. Her poem “What the Girl Wore” is a companion piece to “Why I Mother You the Way I Do”, from her collection Seed Across Snow from Red Hen Press. On her blog (kathleendriskell.blogspot.com), Driskell explains the profound effect that the deaths of three friends during her teenage years have had on her writing, noting her experience in dealing with these tragedies as a major influence in “What the Girl Wore” and “Why I Mother You the Way I Do.”