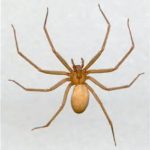 The Brown Recluse, also known as the Hermit Fiddler, a spider whose bite produces a gangrenous sore, is apparently spreading northward. From its original home in the Southwest it has now migrated as far a North Carolina.

Not it.  She.  The one with eggs.
Demographer with the future in her belly,
moving up in the world.  Texas rots
dry, Louisiana wet.  Twenty
years in Alabama: closets, drawers,
silver chests, the backs of portraits
cottoned with eggs and everywhere the sweet
festering scent.  In Tennessee
she homed into the woodpile, roughed it,
budded the board with eggs.  Now here
holed up in my ornamental block
she babysits a quiet contagion.

Lady,
I know your bite.  I am myself
something of a recluse and given
to wearing brown.  My Odyssey –
no, my Penelopeid up the dry
shins of girlhood to the wetter parts
was not unlike your own.  We are heading
both of us north.  The cold, I hear,
is shriveling, the cold bites back.
Even in this lush midway state I feel
a touch of gangrene on my hither leg,
some deadlier hermit fiddling in my brain.

Luck plays a powerful role in the formation of a writer’s perspective and identity.  I was just beginning to write poem-like things when I ran across Ann Deagon’s first books, and she was an excellent practitioner of the kind of poetry I wanted to write, stanzas which vibrantly and evocatively introduced the reader to one subject only to reveal that subject as a metaphor (but no less literally meaningful for that) – vehicle first with cunning suggestions of things to come, a thin but alluring narrative, then the tenor, all tightly knit and headed for a cinching knot at the end, as “fiddling” works here – insignia of the spider, a word for tinkering, the playing of a violin.

It’s not my intention to explicate, but I want to point out that migration becomes evolution, spider becomes woman, weather becomes emotional as well as meteorological, all in service of survival.  Contagion/ gangrene.  Eggs as fecundity, treasure, danger.  Run through this a suggestion of Homer’s story regendered and sexual/marital relationships are suggested.  “Midway” as a carnival can’t feature can’t be ignored.  She is bold, she knows a lot, and though she may taunt and fence, she does not tease.

To a greater degree, what impressed me was the assertive, challenging tone which is never quite belligerent, not quite threatening, but by the end, the narrator has become something neither quite victim nor spider.  I was startled by the seizing of power at the beginning and watched the poem justify the feminist gambit, and the visceral quality of the language, along with the deft identification of the South’s hidden corners said to me, “You need to learn to do this with equal thrift and muted drama.”  I never did, nor did I learn to seize the authority in Deagon’s stern but good-humored way; however, I still have her work to savor (in Poetics South, Carbon 14 and others) and always wish for more.

A native of Birmingham, Ann Deagon lives in Greensboro, North Carolina and for many years taught classics at Guilford College.  Her other books include poetry, a novel and a collection of stories.  86 now, she is a storyteller, a singer and a songwriter.