My prime of youth is but a frost of cares;
My feast of joy is but a dish of pain,
My crop of corn is but a field of tares,
And all my good is but vain hope of gain:
The day is past, and yet I saw no sun,
And now I live, and now my life is done.

My tale was heard, and yet it was not told,
My fruit is fallen, and yet my leaves are green,
My youth is spent, and yet I am not old,
I saw the world, and yet I was not seen:
My thread is cut, and yet it is not spun,
And now I live, and now my life is done.

I sought my death, and found it in my womb,
I looked for life, and saw it was a shade,
I trod the earth, and knew it was my tomb,
And now I die, and now I was but made;
The glass is full, and now the glass is run,
And now I live, and now my life is done.
(1586)

It could almost be something out of “Game of Thrones.”  A disagreement over matters ecclesiastical and political, a young man perhaps caught intriguing (though in his “The House Dove” C.T. suggests he was just an innocent keeping the wrong crow company), an angry monarch, here the Protestant Q.E.I,  a trial, conviction, execution.  Pretty grisly, as the penalty for treason back then was to be eviscerated, hanged and then drawn and quartered by strong and handsome horses.

So in his cell (probably in the Tower), the cultured young man — and yes, Chidiock is his real name — decided to turn to poetry for his note to the world.  He’d tried his hand at it a couple of times before.  He had a knack, and the onrush of death, as Dr. Johnson suggested, has a way of focusing the mind.

And what a note — rhyming iambic pentameter in (mostly) monometer, full of paradox and antitheses, a stern knot tying together regret and resignation.  A quick catalogue of the cliches for mortality prevalent in his day.  We’re born into death, surcease can precede ripeness, sand in the hourglass races, the good we sow is overrun with weeds.  No hysteria here, no whining or pleading, but he plays that most mournful chord three times, once at the end of each stanza — “And now I live, and now my life is done.”  It’s actually a witty and lively dirge, with no pleas of innocence (nor confession of guilt and petition for mercy).  A private thing.

It’s hard to imagine facing one’s death with such dignity, and if it’s not an astonishingly original poem, it is moving, elegant and well executed.  I can imagine Flannery O’Connor’s Misfit admitting that Chidiock would have been a good man, had he been under sentence of death daily.  For me, its testimony to Tichborne’s grit, which is no small thing.  I don’t think I’ll seek out the rap version, though I hear there is one. 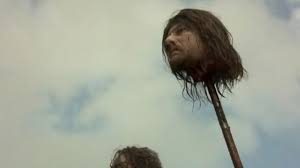