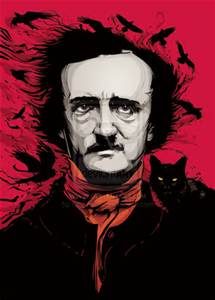 A contest for the Washington and Lee Community
PRIZE: $100 + E. A. Poe action figure

Guidelines: 500 words or less in imitation or parody of the prose  style of the late Mr. E. A. Poe

WINNER: Professor Lesley Wheeler.  Dr. Wheeler is the Henry S. Fox Professor of English at Washington and Lee University, where she has worked for over two decades.  Two of her most recent poetry collections are Radioland (Barrow St. Press, 2015) and Heterotopia (Barrow St., 2010).  Her most recent scholarly book is Voicing American Poetry (Cornell, 2008).

I cannot remember how, when, or even precisely where I first became acquainted with Leigh. My memories are ensnarled with the Gothic typefaces of a thousand books pored over in his company. Or, perhaps, I cannot recall these facts because the character of my betrothed, his quaint lore, and the thrilling eloquence of his drawl influenced me by stages so stealthily progressive. I believe I met him some time after I resigned myself to this half-life in a decaying Virginia hamlet. That members of his family dated back to the earliest settlers of the region cannot be doubted. Yet I never knew his surname—was withholding it a game on Leigh’s part? Or was it my caprice, homage to occult histories haunting this mist-veiled landscape?

My memory does not fail me as to Leigh’s person. He was tall, slender, and, towards the end, even wasted. His footfall, almost incomprehensibly light. I was never made aware of his entrance into my carrel save by the chill of his hand upon my shoulder. In beauty no one equaled him. It was the radiance of a Xanax-dream—an ennobling vision, despite the strangeness of his visage, a deviance I could not ascribe to any particular feature. I examined his lofty forehead—faultless—the skin smoothest vellum, skull bulging slightly above the throbbing temples—and then the inky cursive of his tresses! I regarded the mouth—the magnificent sneer of the short upper lip—the voluptuous slumber of the under—teeth flashing back every ray of the library’s fluorescence. And then I peered into his eyes.

The strangeness may have emanated from Leigh’s eyes, far larger than those of Northerners, fuller than the eyes of a starving springbok traversing the Karoo. The orbs were black, overhung by jetty lashes. Most ominous was the expression. How long I pondered! I could not name it, yet caught its sentiment in the survey of a rapidly growing ailanthus—in contemplation of a burrowing seventeen-year-locust, an oak near-strangled by kudzu, the faint shriek of a rope stretched to breaking.

Leigh’s acquisitions in arcane tongues, mathematics, and moral sciences were gigantic, astounding, such as I have never known in his sex. I was aware enough of his supremacy to trust to his guidance in our studies, until a sickness corrupted him. Over some weeks his complexion altered, the veins in his temples beating an erratic code, until I saw he must die.

Since then, I muse over tomes Leigh once procured from remote stacks, the crabbed sentences he once translated. I cannot comprehend them, or if I reach the verge of understanding, their sense flees. Late at night, teapot empty, I stroke their bindings. Could that be a sob from the leaves—of ecstasy remembered—or of horror? Might Leigh, in fact, have never belonged to me at all? This fancy shines up from parchment as a message once erased, although a remnant sheen of graphite flickers yet.