Some say the world will end in fire,
Some say in ice.
From what I’ve tasted of desire
I hold with those who favor fire.
But if it had to perish twice,
I think I know enough of hate
To say that for destruction ice
Is also great
And would suffice. 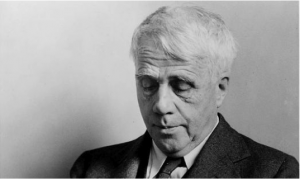 Robert Frost, one of America’s most well known poets, was born in San Francisco in 1874. He moved to New England ten years later, after his father’s death, and started his career as a poet early in his life – in fact, he graduated from Lawrence High School as “class poet” and was published shortly after. Frost, best known for his regional style, often writes about life in New England, drawing upon his adopted home as inspiration for his work. In this poem, however, he sidesteps his trademark regionalism in favor of a witty, restrained inquiry into the nature of the end of days.

In “Fire and Ice,” Frost sticks to a colloquial, iambic structure, but this poem is purposefully ambiguous, its rhyme scheme untraditional. I find this poem to be incredibly witty – smug, even – which is what first drew me to it, but it’s also fairly complicated; Frost says so much in so few lines, and it takes several readings to crack the surface of his purposefully cryptic language and form. Though he writes “Fire and Ice” in a vernacular way, with monosyllabic words far outnumbering more complicated ones, the brevity of the poem invites the reader to seek meaning from it. There’s certainly more than meets the eye.

Some scholars claim this poem was inspired by Dante’s Inferno, as “Fire and Ice” draws many interesting parallels to the work. It contains nine lines corresponding to Dante’s nine-leveled configuration of hell, and its rhyme scheme mimics the terza rima pattern Dante invented for his Divine Comedy as well. The form of the poem, which begins with the longest line and more or less works its way down to the shortest, resembles the funnel-shaped structure of Dante’s hell. Though we often associate hell with imagery of fire and heat, Dante turns our preconception on its head by sentencing the Inferno’s worst offenders to an eternity in a frozen wasteland.

However, professor and astronomer Harlow Shapley claims a conversation he had with Frost, who was writer-in-residence at Harvard at the time, was the inspiration for this poem. A year or two before the publication of “Fire and Ice,” Shapley claims Frost asked him, “Now, Professor Shapley. You know all about astronomy. Tell me, how is the world going to end?” Shapley gave his scientific opinion – that the world would be incinerated, or that a permanent ice age would work to wipe out all life – as his answer, and “Fire and Ice” serendipitously appeared a year or two later.

As with all famous works, though, the interpretations of “Fire and Ice” stretch far beyond the scope of these two anecdotes. I think Frost is saying else entirely, though still profound: fire and ice, two elements we commonly conceive as fundamental opposites, have equal powers of destruction – we should stay cautious, as they might not be so different after all.

“Fire and Ice” was first published in Harper’s Magazine in 1920 and also appears in Frost’s Pulitzer Prize-winning 1923 book New Hampshire.

To read more about the various interpretations of “Fire and Ice,” visit this link: http://www.english.illinois.edu/maps/poets/a_f/frost/fireice.htm